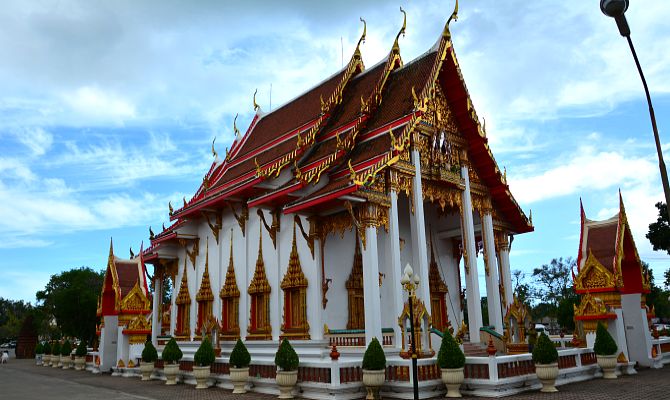 Wat Chalong Temple is one of the largest Buddhist complexes located in Phuket. If we talk about its exact period of occurrence, it is not fully known. But the first written mentions are dated 1837.

The temple territory is divided into several parts, where individual buildings proudly rise, having their direct purpose. The Wat Chalong complex has a separate central part in the form of a prayer hall. It is equipped with gilded statues, personifying the well-known stories of monks-abbots. A bright personality is considered to be the doctor Luang Por Chai, who strongly supported local peasants in the attack of the Chinese (1876). Thus, Wat Chalong became a significant place for the locals, and supernatural powers were attributed to the monk.

Entering the structure, it is necessary to cover the legs to the knees and shoulders, remove pre-shoes.

Currently, the described religious complex, located in Phuket, is a significant place that is regularly visited by Thai pilgrims. In the central part of the described territory there is a pond in which goldfish inhabit, which is the personification of angels, giving all visitors success in all undertakings.

The entrance is decorated with a statue of an elephant, if you rub a part of his torso, good luck will not keep you waiting. At the entrance you can also purchase a lotus, which is used for laying on saints. To this end, the main temple hall is equipped with two boxes, from which visitors draw individual sticks, pre-numbered.

With this attribute you need to proceed to the cabinet, in the boxes with the numbers of which the notes with predictions are laid out. For the same purpose, bars made of bamboo roots are used. They need to connect and quit. So the visitor opens an instant answer to the question of interest. Equivalent halves mean «yes» and «no.» Visiting Wat Chalong, which is a real treasure in Phuket, a person will be able to know fate. On the territory of the temple Chalong stands a pavilion, designed to say goodbye to the departed. It is equipped with a sacred place for ceremonial rites, there is a crematorium. It is known that in 1999, an invaluable and important relic appeared in the temple complex — part of the Buddha’s bone, which was granted by the government of Sri Lanka. For the location and storage of this relic already in 2001 was built Stupa Phra Mahathat.

It is forbidden to touch its fruits and flowers, to cause any injury.

Wat Chalong, which is considered the hallmark of Phuket, has an unusual and attractive park, its traditional design is striking. Here, the Sala tree was demonstrated to visitors, under which, according to legend, the Buddha was born. Genuine interest in tourists cause constantly exploding firecrackers. Creating such sounds with the help of a special stove, local monks frighten off evil spirits seeking to enter the temple grounds.

Wat Chalong Temple is located just 8 km south of Phuket. If you follow from “Central Festival” (famous shopping complex), according to Chao Fah Nok Rd (Chao Fa West Rd), the road will lead to the described attraction located on the left side of the road.

If you move from Chalong’s ring in the direction of Phuket airport, after 10-15 minutes on the right side you will see a sign “Wat Chalong” on the right side, and after it — a turn that leads to the temple complex. Traveling in Phuket, the landmark can be the Chalong Bay of the same name, in close proximity to the island’s famous zoo. Tourists often travel to this area on motorbikes or their own cars.

Time and cost of attendance

Wat Chalong accepts visitors for free, daily from 9:00 to 18:00. For those who decide to stay in Phuket, below a selection of cheap hotels.

2019-05-08
admin
Предыдущий Is the end of the world possible: predictions and forecasts
Следующий Favorable days of the week according to the lunar calendar from June 12 to 18