Главная » Tourism » Tiger Temple in Krabi: video, how to get, map, hotels near

Temple cave tiger in Krabi: how to get there, photos, reviews 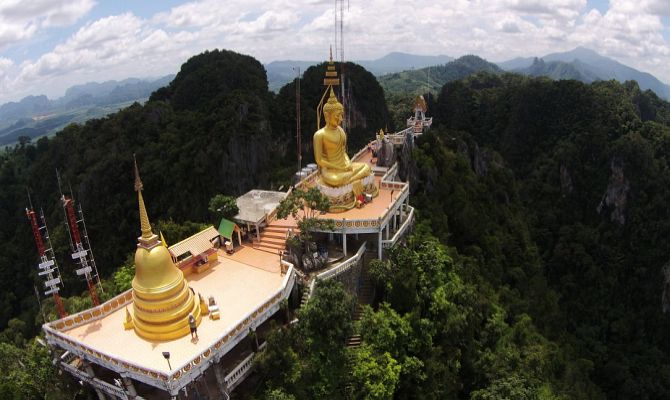 The Tiger Cave Temple (Temple of the Tigrin Cave) or Wat Tham Suea is a unique landmark of Krabi province, created by the Thais in the second half of the 20th century.

This is a complex in which the existing monastery is located (more than 200 monks participate in the rituals) and the famous media center in the country — among the statues and small architectural forms, it is worth noting the Chinese pagoda, which was built in honor of Kuan Im — the Chinese goddess of mercy and fertility .

Not far from the temple, a special hotel was erected in which local and foreigners reside, who visited the temple for multi-day meditations. The monks themselves live in miniature huts on the territory of the temple complex, which is easy to see during a walk.

The highlight of this complex is considered — viewing plateau, which can be reached by a ladder. The starting and ending points of the ascent are divided into 1237 steps. The height of the observation deck is 600 m above sea level.

The reward for a long climb is a magnificent panorama and a statue of Buddha, surrounded by miniature copies of the founder of the Buddhist religious denomination. A visit to the observation deck is recommended after exploring other attractions of the complex, named after the giant tiger, who left this place when its founder arrived.

It is better to start exploring the temple from the gorge, into which you can go down the road starting at the pagoda. The gorge is covered with thickets of tropical vegetation. Among the pristine forests built monastic houses. Near the dwelling of monks there are a lot of statues and other religious paraphernalia. On the way you will meet the cave altar of the Buddha and the sacred tree, next to which lie the offerings of monks.

The complex is located 7 km from Krabi Town, at the foot of one of the highest cliffs in the province — Khao Phanom Bencha. You can get there by public bus that goes from Krabi to the airport — the cost of the trip is 80 baht ($ 2.2).

To get to the temple, get off the bus about 1.5 km to the final stop. The former abode of the tiger is a little to the left of the airport. If you take the highway number 4 from Krabi, then you can get to the temple complex on an asphalt road.

When you leave the temple, return to Highway 4 and take the bus from Krabi Airport to the city. You can also get to this attraction by bike. Rented transport can be left at the entrance to the temple.

Entrance to the complex is free, but do not forget about donations — this is the rule of good form. It’s easy to prove yourself to be a well-bred person — leave an amount of 20 baht ($ 0.5) per visitor.

Before you go to the temple, you need to prepare to get the most out of your walk. Come early in the morning or in the evening around 17 o’clock. Buy in 7/11 electrolytic drink, they stand in the refrigerator and they have the inscription «Electrolyte».

Not very tasty, but it will give you fast carbohydrates, vitamins and salt, which you will lose during lifting. Take necessarily water! And give yourself a rest. Do not chase up. Just correctly assess your capabilities. There is nothing heavy there. Parking, toilets, and a small shop are provided.

Once it was the abode of the tiger, but now there are a lot of monkeys and cats. With these representatives of the fauna of the province of Krabi, you will meet while climbing to the observation deck — do not try to stroke them.

Wild animals are not disposed to close contact with humans, and may bite.

If you made a donation, you can ask for blessings from the monks — according to local beliefs, after this, the spirit of the tiger will accompany you, attracting good luck and chasing away life’s troubles! Go to the temple without shoes.

Follow this recommendation in Krabi and other regions of Thailand — the local population with great respect treats religious shrines and demands from the guests of the country a similar attitude to sacred objects. The most beautiful view from the observation deck opens at sunrise or in the evening during sunset.

2019-05-08
admin
Предыдущий Comic horoscope: how the signs of the zodiac attack the rake
Следующий Powerful love mantra for attracting the senses