Главная » Tourism » Temple of Truth in Pattaya: how to get there, photos, description, map

Temple of Truth in Pattaya: photos, reviews, how to get there 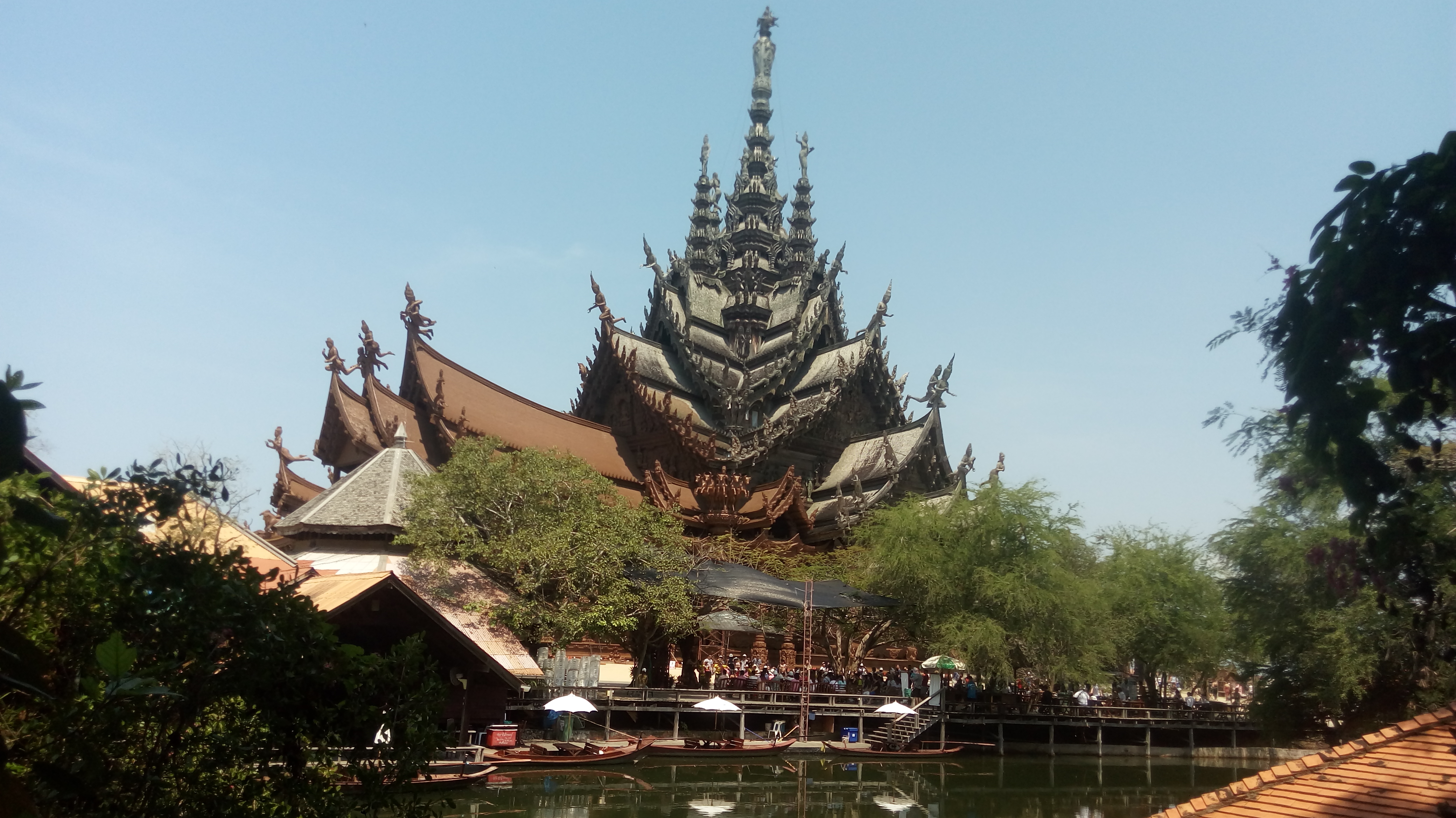 All the mysterious and centuries-old history of Eastern religion is embodied in the Temple of Truth in Pattaya. Not to notice him, passing by, is impossible.

The majestic building attracts thousands of views to its high walls, roofs with elegant spiers and a huge number of wooden figures depicting not only saints, but also animals, and even mythological creatures.

What is the temple of Truth?

Majestic and exquisite, the temple enchants tourists. It is completely built of teak and iron wood and is considered one of the tallest wooden buildings in the world. The height of the temple is 105 meters. It is noteworthy that during construction workers did not use a single nail. Instead, parts connect wooden clamps.

Its construction was started in 1981 and is still not fully completed. At the moment, although the main building is already completed, the interior and exterior of the temple are still under construction.

Estimated completion date of all works — 2025.

In parallel with the construction work and reconstruction work. Despite the fact that the temple began to be built only a few decades ago, some elements of the building have already managed to be damaged due to the wet climate of Thailand, which is destroying a tree.

In this process, too, there is a certain symbolism, because everything in this world is cyclical; everything is born, dies and is reborn, just like these fragile wooden figures.

The goal with which the eccentric Thai millionaire Lek Viriaphante organized the construction — the preservation of monuments of Thai culture, architecture and religion. Not referring to any religion, the temple is designed to unite representatives of different beliefs.

▣ In construction, workers did not use a single nail.

Wooden sculptures, which can be seen at every step, depict the mythology of Cambodia, Thailand, India and China, and various symbols of the Hindu and Buddhist religions. In addition, all the walls, arches, stairs and even doorways are also decorated with carved ornaments.

The decoration was based on the legend that our world was based on seven bases: earth, sun, sky, moon, stars, mother, father.

The temple spiers are also crowned with four symbolic figures. On the four edges are four figures of virgins. The first, holding a lotus in its hands, is a symbol of religion. The second, with a baby, symbolizes life itself.

A virgin with a book is a symbol of philosophy, and a virgin with a dove is of peace. The central and highest spire crowns the figure of a rider on a horse. This is Phra Sri Ariyaimethi Phra, the last person to attain enlightenment.

▣ The Temple of Truth in Pattaya — an impressive monument of architecture.

The authors of this grandiose project, having been convinced that modern people are completely bogged down with everyday materialistic problems, decided with the help of Eastern art, religion and philosophy to remind everyone of what is really important. True, to understand the characters that are found in the temple everywhere, it is difficult because of their number. But everyone will find something that will hook some string in his soul.

Temple location and cost of attendance

The temple of truth in Pattaya is located in Naklua, its northern part. The huge wooden building is located on the peninsula, right near the sea. This is one of the most famous sights of the city, so finding it is easy. You can get to the temple yourself on a rented vehicle, by taxi or tuk-tuk, or by transfer.

Temple of Truth on Pattaya map

In order to find the way yourself, you must go along Naklua Street straight to Soi Naklua 12. Then you need to turn left and go straight ahead to the next junction, where you also need to turn left. A few minutes later the temple looms on the horizon.

This place can also be visited along with a guide as part of the excursion group. Guided tours of the temple are held every half hour from eight in the morning until five in the evening. Pleasantly pleased with the presence in the state of Russian-speaking guides.

Entertainment and excursion program can be chosen at the entrance to the temple, which in addition to the walk through the territory can also include riding a boat, quads, horses, kibitka and even elephants, as well as boating or foot massage.

In the park that surrounds the building, you can walk for free, though you will not see a hundredth part of all the beauty presented inside the building. In addition, the money spent on visiting the temple goes to its construction, so that you thus make your contribution to the construction of the world’s greatest wooden building.

2019-05-10
admin
Предыдущий Favorable days of the week according to the lunar calendar from May 16 to 22
Следующий Zhanna Friske died: the predictions of psychics came true