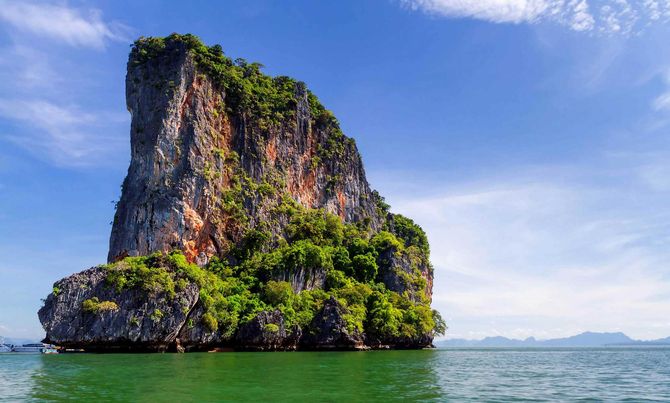 Southwest of Thailand is reasonably considered to be the tourist center of the country. Despite heavy rains and not very comfortable weather most of the year, Phuket and the province of Phang Nga still outperforms the resorts of the Gulf of Siam, whether they are islands (Chang, Samui) or mainland resorts (Huahin, Pattaya).

One of the undoubted advantages that attract tourists to this region is Phang Nga Bay — a natural reserve of unique beauty, unique in its kind.

The uniqueness of the bay, which is also permissible to call Pang Nga, due to the peculiarities of its geological history and tropical climate with a lot of rain.

Phang Nga is a bay that is part of the Andaman Sea and is located between Phuket and the mainland coast (Phang Nga province and Krabi). The conventional boundary of the bay in the south are 2 large islands Yao (Yai and Noi). Quite a large area (400 sq. Km) is a conservation area with the status of a national park, which is called “Phang Nga Bay”.

The climate of Phang Nga is typical for this region:

In the distant past, the water level of Phang Nga Bay was tens of meters higher. Gradually, the bottom, represented by limestone sediments, rose. Due to frequent and heavy rains, the effects of sea water, as well as wind blowing from the sea, bare and relatively soft limestone rocks were subject to bizarre deformations. The so-called karst islands, mountains, caves, tunnels, inland lakes were formed — all of which are the natural sights of Phang Nga today.

In total, there are about 100 islands in the bay. Some of them are quite large, for example, the island of Pania, inhabited by people. The majority is uninhabited. Many, such as the island of Tapu, are so small that it’s difficult to call them islands.

The largest island in the bay. You can get here yourself by ferry from Phuket. The island has a tourist infrastructure: places for accommodation (bungalows), the opportunity to dine or dine, equipped beaches. If you wish, you can stay here for a few days, during which you can make excursions throughout the bay. This is a good option if you consider that the bay is large and you can’t see everything in standard 3-4 hours.

Phang Nga Bay is known primarily for the island of Tapu, which had the imprudence to light up in one of the James Bond film series. Since then, it has become a real brand, and excursions around the bay with the arrival on Phing Kan Island (or Phing Ghan), which offers views of Tapu, are called nothing other than “a trip to the island of James Bond”. Unfortunately, the island itself can not be reached, because it is a limestone rock protruding vertically from the sea, shaped like a man’s nail. Actually «tapu» — this is the «nail» in Thai. Of interest is not so much the island, as the surrounding nature of amazing beauty. The only negative is that the bay area is always crowded.

A visit to this island is a must-see point on the Phang Nga Bay excursion program. The attraction here is a settlement of people, known as a Muslim fishing village. Without going into the history of the question of how Muslims found themselves in a Buddhist country, and even on an isolated small island, we note that everyone who is interested in ethnography, the traditional way of life of people of other cultures, will be interested here. In total, the village is home to just over 300 families. The total population today is about 1,500 people. How all these people survive here remains a mystery. The island itself, like all the others in the bay, is a vertical karst rock. People live on the “territory” artificially attached to the island, which stands on stilts right in the water: this applies to all buildings, including the sports ground and walkways-streets connecting the buildings.

Despite the difficult conditions in the village there is a temple and a school. One of the concerns of the latter is the cultivation of vegetables by hydroponics and the teaching of this process to children.

The coast of Hong Island, according to many, is one of the best beaches in Phang Nga. «Hong» in Thai is translated as «empty space.» In all likelihood, the space is called a 400 m long beach, covered on all sides by steep karst cliffs. Hong is one of the few islands of Phang Nga, on which it is possible to go deep into. There is a special hiking trail, following which you can be in the real Thai jungle. The island is known for the fact that it is inhabited by huge two-meter lizards, and the majority of tourists come to see them.

The marine fauna around Hong has scorching and scuba diving.

Quite a large island located closest to Phuket from the above islands. Phanak is known for its internal lagoons, karstic cave and hongs.

The latter are called isolated land areas within rock formations, which can only be reached by breaking dark and long tunnels. Hongs are available only during low tide, because the tunnels leading to them are low, and the rest of the time is filled with water.

How to get to Phang Nga Bay

Phuket, Phang Nga or Krabi province can be the starting point for an excursion trip to the islands of Phang Nga. Since the bay is one of the main attractions of the south-west of Thailand, this direction is present in all local travel agencies.

[quote font = «arial» font_style = «italic»] The trip for one person will cost about $ 50, not including admission to the national park (200 baht per person), kayaking, food for the trip. [/ quote]

You can visit Phang Nga Bay on your own by renting a boat-boat on any beach or pier. A company of several people, this trip will cost less.

A good option would be a multi-day trip to Phang Nga with accommodation on the island of Yao. The number of free bungalows is limited. Night by Thai standards is not cheap. Nevertheless, it is convenient and, moreover, guarantees rest in absolute distance from civilization.