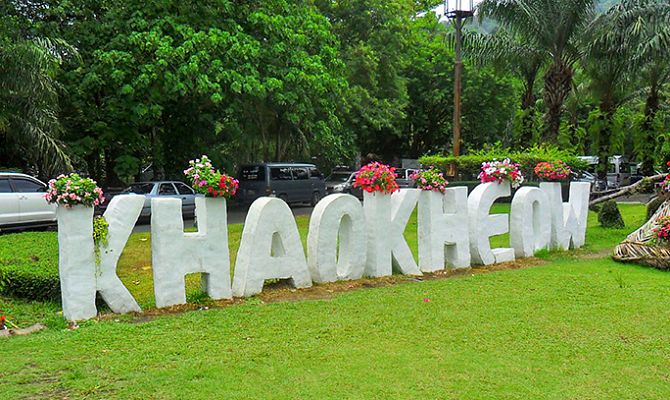 Khao Kheo is an open zoo, which is located just 60 km from Pattaya. Its feature is that there you will not find a single cell. All animals live either in spacious open-air cages, or freely walk in a fenced area, where everyone can look at them closely enough and even feed them.

For the safety of the visitors themselves, the dangerous predators are fenced with a grid that does not allow them to show aggression.

One of the most interesting and largest zoos in Thailand, is considered Khao Keo

How to get to the zoo

The path to the zoo from Pattaya takes 40 minutes. It should be borne in mind that public transport in this direction does not go, so you have to do in other ways. You can rent a motorbike or car.

Finding a zoo on your own is not so difficult, it’s enough to go north from Pattaya on a straight road to the famous tiger zoo, then another five kilometers to a large signpost that shows the road to Khao Kheo. This sign is next to the traffic light. After this, you need to turn right and drive another 20 km to the zoo.

One of the most interesting and largest zoos in Thailand, is considered Khao Keo

If you are afraid of getting lost in unfamiliar territory, you can choose another way, namely transfer or taxi. Transfer can be ordered on the official website of the zoo. He will come to you directly to the hotel at the chosen time and take you directly to the park gates.

As for a taxi, it is not necessary to book it immediately from the hotel, as it will be quite expensive. It’s easier to get to Sri Racha tiger zoo on one of the songteos (the cost of such a trip is about 20 baht). They regularly walk along the Sukhumvit highway. From there you can already order a taxi. The drivers know the road well, so it’s worth mentioning the name of the zoo and they will bring you to the right place.

And finally, the easiest option is to visit Khao Kheo as part of the tour. Tickets can be purchased at almost any travel agency. Their cost is about 900 baht. It includes a round trip on a minivan, an entrance ticket to the zoo itself, and in some cases even trips around Khao Kheo on an open bus provided by the company.

Cost of attendance and work time

If you decide to visit Khao Kheo on your own, not as part of the excursion, the entrance ticket will cost you 400 baht. If you arrive in a group of more than 5 people, then the tickets will cost 100 baht cheaper.

In addition, there are several types of excursion programs offered by the organizers, the prices of which range from 2,000 baht. You can buy tickets at a travel agency, from a guide, or directly at the entrance to the zoo. The last option is the cheapest, especially if you take along some of the Thais, because for “their” prices are much lower.

Khao Kheo is sponsored by the Queen of Thailand Sirikit.

The zoo is open every day, from eight in the morning until six in the evening. But visitors can also linger on the territory of this original zoo for the whole night. For this, there is a small hotel with quite low prices, as for such a popular tourist destination.

On the territory of Khao Kheo there are more than 300 species of various animals and birds. The entire zoo in Pattaya is divided into several thematic areas:

There are a lot of paths between these separate zones, so you can walk along the territory by several routes. The territory of Khao Kheo is almost impossible to get around on foot in the day allotted for visiting the zoo.

In addition to the previously mentioned option with a rental vehicle, you will also be offered the opportunity to ride around the area on an elephant. The trip can last 10, 20 or 30 minutes.

In addition, elephants can feed from the hands. Food for these purposes is sold at the entrance and costs from 10 to 100 baht. Naturally, it is possible to feed not only elephants, but also other animals, although it is worth considering which fruits to whom you can give. In order to avoid unpleasant situations, plaques hang all over the territory, telling about prohibitions on feeding (for example, it is forbidden to give cucumbers to rhinos).

Buy food, you can at the entrance to the zoo

In addition to the extravagant ride on an elephant, you can be entertained by various shows with animals from the zoo: pelicans, cormorants, boars, otters and even tigers, including a representative of the endangered species of white tigers.

The white tiger is an attractive and bright creature.

One of the most exciting shows is “Journey to the jungle”. It differs from all others in that all animals perform independently, without the participation of animal trainers. The arena where the show is taking place is the same aviary as the others. With his appearance, he reminds viewers of the natural habitat of animals. At first, animals that are not dangerous in any way fly and stroll around its territory.

Then the lattice separating the spectators and the “artists” is lowered, and the predators are already entering the improvised scene: lions, hyenas, cougars, tigers and others. Some of them hunt, taking prey from the bushes or from tree branches, others just walk.

During the show on the stretched between the rows of vines walking binturongs. By the time the show lasts about half an hour, the action is accompanied by explanations of the animals performing. It is conducted in two languages: English and Thai.

And those who want to get a dose of adrenaline will definitely like night safaris. It is held after sunset, from six to eight o’clock in the evening. During this action, the organizers are trying to create the most realistic picture of the nightlife of the jungle. You can also buy a tour, during which, you will spend all the mysterious places of the zoo, which are not even on the maps offered to guests.

You can find out more details about various shows and their schedule directly after entering the zoo, because they are constantly changing.

The employees of the park-reserve hand out leaflets with a description of the shows held in Khao Kheo.

In order to visit a huge zoo brought you only positive emotions, take with you on the road:

Tourists with a limited budget would like to give the following advice: do not buy expensive excursions, take a walk around the territory on your own, and you will be surprised how many interesting places you can discover for yourself without a guide’s hints. Take the map in your hands and explore the enclosures with animals, snake farms, bee factories and even pharmacies in which various means of traditional Thai medicine are presented.

But it’s better not to save money on renting a vehicle. It is very difficult to walk around the whole zoo, although it is not as big as in Bangkok. In addition, spending time on the ups and downs of the uneven paths of the zoo, you miss the opportunity to watch interesting shows and just get tired of the endless walks in the heat.

Do not spare money for feeding animals. This is quite an interesting occupation, which will give you a lot of positive. You can buy different fruits from merchants, but it is better to take a platter. There is a set of fruits and vegetables, which is enough to feed different animals in all parts of the zoo.

The reserve is located next to the jungle, from where wild macaques get into the park, ready to feast on all that they are offered. But in Khao Kheo, they are unwelcome guests, as tourists are told by signs hanging everywhere, so save the fruit for the animals of the park-reserve and do not encourage macaques.

Zoo Khao Kheo in Pattaya — is one of the unique open zoo reserves. In it, you can really feel the unity with nature. Therefore, no matter how old you are, and with which company you came to Thailand, this place is worth a visit.

2019-05-14
admin
Предыдущий How to find out the name of the future husband
Следующий Number 666: meaning and magical power