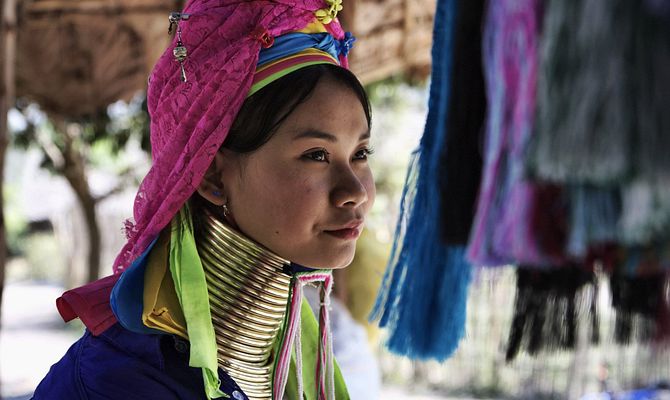 Almost every tourist who came to the Kingdom of Thailand includes in the program of his itineraries a visit to the village of the Karen tribe, famous for its long-necked women.

These amazing people live in the northern part of Thailand, in the mountainous terrain near the border with Myanmar (formerly Burma). These are representatives of the Padaung ethnic group (“Padaung” — “copper ring”), one of the branches of the Karen tribe. Only among girls, from the age of 5, do they put brass or copper rings around their necks, gradually increasing their number. Or rather, they don’t wear rings, but a thick copper rod, which spins around the neck in a spiral.

In a mature woman, the number of turns can be more than two dozen. As a result, the neck becomes incredibly long.

By the end of life, the weight of the rings in some representatives of the tribe reaches several kilograms, and the height is more than 20 cm. Sometimes the spiral-rings are made deliberately high so that they fit snugly to the chin and shoulders. In this case, women cannot turn their heads, which gives them a lot of inconvenience. But such exoticism is rarely practiced.

How the long-necked appeared in Thailand

The tribe settled in the northern part of the Kingdom of Thailand in the 70s of the last century. Escaping from the turmoil and persecution that prevailed in Burma, the Karen people migrated to a neighboring state. The King of Thailand and the government reacted with understanding to their situation and sheltered in their state. Karen here have refugee status, so they can only be in the province where they live. When leaving Thailand, they will forever lose the opportunity to return. In the name of the prosperity of tourism business, the Thai government has allowed the Karen to preserve its language and cultural traditions, giving the opportunity to earn on the desire of travelers to see the exotic.

Initially, rings on the neck were worn only for girls born on the full moon or on Wednesdays. But over time, every woman of the Padaung nation began to wear such an ornament. There are several versions that explain the origin of this tradition:

One legend says that once, a long time ago, tigers attacked the Padaung and most of the tribe gnawed their necks. In the absence of men, the likelihood of wild animals attacking women and children increased. To prevent the race from ending, the leader ordered to wear a kind of metal ring protection on women and girls. Of course, the rings did not literally protect from powerful fangs, but they could act as amulets.

2. Rings provided the unattractiveness of women for others

Overly long necks made the girls very unattractive for the peoples of other tribes, so the men came up with ringing their lovers’ necks. Uglyness protected them from abduction, capture, and subsequent slavery.

The more of them and the longer the neck, the more beautiful the woman was considered. Such a girl could marry more successfully.

4. Tradition — tribute to the ancestors of the people of Karen

According to an old legend, Wind and Dragon were in love with each other. When it became known to Vetru that his chosen one was pregnant, he began to spin frantically around her with immense joy. The dragon has given birth to a cocoon, from which the first Karen, a representative of the nationality, which is today one of the attractions of Thailand, was born. The dance of the happy Wind began to symbolize the spiral-shaped hoops around the necks of the Padaung women.

5. Punishment for the unfaithful wife

Another belief says that her husband removed the rings from a woman convicted of treason. After their removal, the wrong one remained bedridden, so the atrophied neck muscles without rings could not hold the head. This version is more suited to the tribes that inhabit the African continent, in which women also wear hoops around their necks. After all, Africans wear heavy rings that pull the cervical vertebrae, and when they are removed, there is a high risk of damage to the spine. In Thailand, women do not experience the painful inconvenience after removing jewelry. Before going to bed or bathing, the beauties get rid of them, and in the morning they put them on for demonstration to tourists.

X-ray studies have shown that in Padaungs, the length of the neck does not increase when wearing rings — deformation of the upper chest occurs when shoulders and collarbone fall, and the effect of a long neck is created.

If you stop wearing hoops, in a couple of years the proportions of the body will be restored. But, be that as it may, the percentage of marital infidelities and divorces in the long-necked tribe in northern Thailand is very small.

Having moved to Thailand, the Karen understood that their exotic custom could be a good attraction for many tourists. They organized reservation villages, where they showcase the conditions of their everyday life to visitors, sell handicrafts, demonstrate the main exhibits — women with long necks. Female giraffes in Thailand occupy a privileged place in their village. They do not work in the fields, do not do heavy, exhausting work, like others. Their main task — the occupation of folk crafts. And the man, whose wife’s neck is decorated with a “necklace”, has a higher status than that of his fellow tribesmen.

Karen treat their business ambiguously. On the one hand, it is unpleasant for them to feel like a pet in a human zoo and give the lion’s share of income to travel agencies, and on the other hand, a fairly tolerable existence compared to compatriots from troubled Myanmar reconciles them with reality. Karenki — skilled craftswomen. Fabrics woven by them on hand-made machines with bright, ethnic patterns have conquered not only Thailand and neighboring Asian countries. Almost every tourist who came to visit the tribe considers it necessary to purchase an exotic thing.

How to behave in the settlement of long-haired

During a visit to the reservation village of long-necked women and other tribal settlements in Thailand, follow simple rules of conduct:

When visiting the village, tourists can witness the tribe’s everyday life, as well as see ritual ceremonies. In addition, there is an opportunity to try on and buy legendary rings. For many, visiting the village of the Karen tribe with long-necks causes an ambivalent feeling: pity and curiosity. The artificiality, staging of what is happening and the exhaustion in the eyes of «living exhibits» are striking.

Nevertheless, the Padaung women are friendly and quietly posing in front of the tourists, demonstrating what the majority of those who come to Thailand, seeks to get to the north of the country to visit the ancient people.

2019-05-13
admin
Предыдущий Comic horoscope: the most harmful signs of the zodiac
Следующий What to give for Valentine’s Day on the sign of the zodiac