Главная » The calendar » What is the number of Semik

What is the number of Semik

What is the number of Semik 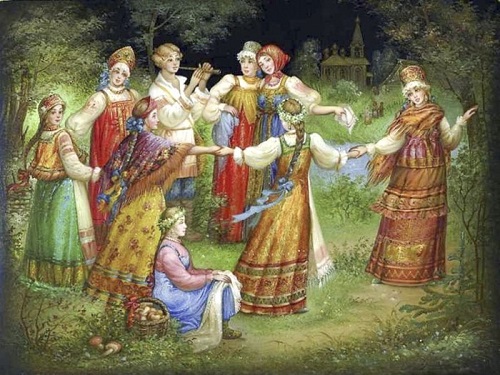 The national holiday Semik is associated with a large number of signs and traditions. Before the advent of Christianity in Russia, he was considered one of the main days.

For the celebration of Semik prepared in advance. This day was considered a transition from spring to summer, which means, to a new stage of life. Semik is associated with the commemoration of the deceased relatives, which at all times in Russia were treated very carefully.

On the day of the holiday, festivities were held which began after the morning service in the churches.

Semik falls on May 24th. This is the seventh Thursday after Easter. On this day commemorate the «mortal dead», that is, people who did not die their own death. These may be suicides, killed under unclear circumstances, killed.

They also include sinners and those involved in the occult. On this day, according to beliefs, it is possible to free souls stuck between worlds, so that they do not become hostages of unclean forces and cannot harm living people. The term «mortal» refers to the manner of burial. Previously, they were put in the graves, face down, covered with branches or stones.

Believers on this day visit the temples, carry with them bouquets of wild flowers, and the floors in the temples are covered with fresh grass.

Customs and traditions of the day

In antiquity, on a holiday, young girls were accepted into the ranks of more adults: they were taught to tell fortune telling and betting on their betrothed. Pay attention to the birches, which are a source of female strength and attractiveness. There were round dances around the young trees, dressed branches with wreaths of flowers, bright ribbons and other hand-made ornaments. The trees were asked for help in finding beauty, they conducted ceremonies aimed at attracting love and happiness.

In the old days, girls wrote little notes that were buried under their roots. They wrote the most secret desires, which are necessarily fulfilled during the year.

On the day of Semik, rituals are conducted so that the harvest is good. To do this, they pray in the fields to the Higher Forces, asking them to protect crops and divert disaster: droughts, torrential rains, fires, pests.

In the afternoon, they visit the graves of relatives, clean up the graveyards and replace the flowers with fresh ones. There is a tradition of decorating graves with birch branches and leaving a mention.

During the celebration of Semik in the church, you can order a memorial service for relatives who did not die a natural death. The priests pray for the souls of the departed, so that they do not become hostages of unclean forces and do not remain between worlds, without being able to go to Heaven.

Celebrating Semik used to be a big event. People in the villages went to visit each other, were treated to delicacies and necessarily wished health to the hospitable hosts. In the modern world, most traditions are no longer observed, but the commemoration of the departed is still in the first place. Good luck, and don’t forget to press the buttons and