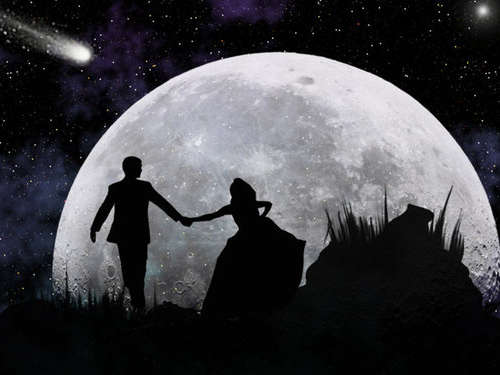 Astrology does not deprive such an important day as a wedding day with its attention. After all, family life is affected not only by the compatibility of the spouses, but also by the position of the moon on the day of the marriage.

1st of May — on the first day of the month the moon is in the constellation Aquarius. Favorable lunar day for marriage, mutual support will be the basis of relations. The pair will be extraordinary and strong.

The spirit of hospitality will reign in the house, and the spouses will have common interests.

May 2 and 3 — the Earth satellite will go to the constellation of Pisces, which will contribute to a gentle and surprisingly committed relationship. But due to the influence of the lunar day, instability and conflict may still occur in the pair.

May 4 and 5 — not the most favorable days for marriage, because the influence of the Aries constellation and the tendency to leadership of both partners will increase.

May 6 and 7 — The moon will turn into the Taurus constellation, which is very successful for a future marriage: the connection will be strong, long-lasting, and in the family we can expect prosperity.

May 8 and 9 — Under the influence of Gemini, it is good to marry couples who are prone to sociability, activity and do not sit still. These two days are favorable for creating a family.

May 10 and 11 — the Earth satellite will move to the constellation of Cancer, one of the most favorable for creating a family. The house of this family is like a fortress, where there are no lies and misunderstandings.

May 12 and 13 — favorable days for marriage, the spouses will constantly feel themselves in love again and often make each other lovely romantic gifts. The constellation of Leo is well suited for the conclusion of strong alliances.

14.15 and 16 May — Astrologers advise families who marry in the days of Virgo’s influence to pay less attention to the negative and show restraint. Fairly frequent domestic problems are predicted.

May 17 and 18 — every year family relationships will only strengthen, and the romance of them will never be lost. Spouses will not represent life without each other. The influence of Libra is favorable for marriage.

May 19, 20 and 21 — The moon will pass into the constellation of Scorpio, due to which the spouses will have to pass the test of jealousy. But between them there will be a strong connection at a completely intuitive level. Astrologers advise to be frank from the very beginning.

May 22 and 23 — a pronounced basis for such a marriage will be trust. The influence of the constellation Sagittarius will help to be not just a loving couple, but also the best friends. Days are favorable for marriage.

May 24, 25 and 26 — three adverse days for marriage. Capricorn’s influence will increase. Love may just disappear from such a relationship, but the spouses will know how to take care of each other.

Frequent depression and self-digestion are possible.

May 27 and 28 — The moon will go to the constellation of Aquarius. Great joy in the family will be the birth of a child, but for the sake of it the spouses will have to leave some hobbies. However, this will not affect a warm love relationship.

Days are favorable for marriage.

May 29 and 30 — under the influence of the constellation Pisces, it is favorable to begin family life. Spouses will literally feel each other and the union will be extremely harmonious.

May 31 — The influence of Aries is not the most favorable way may affect the relationship of the spouses. But if they understand that equality should prevail in the family, the union will be quite successful.

Following the recommendations of astrologers, you will surely create a strong family where love will reign. All the best and don’t forget to press the buttons and

2019-05-13
admin
Предыдущий Lunar eclipse in august
Следующий Lyon Airport: how to get there I Tourist Information