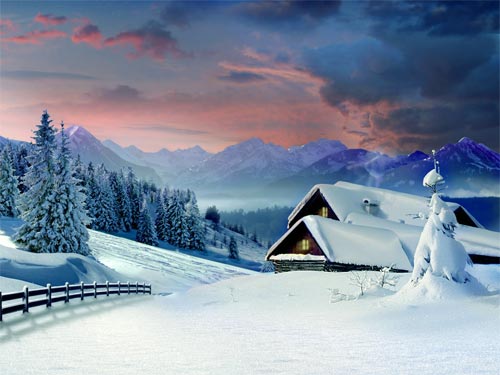 Since ancient times, people believed in omens. Thanks to popular beliefs, it was possible not only to learn about future events in one’s life, but also to predict the weather. To this day, many are trying to predict the appearance of frost or thaw, to find out what the summer will be like or how long it will rain.

In winter, as a rule, our ancestors made forecasts for spring and summer. So what do the signs of winter mean and what can be learned with their help?

Folk omens about the weather

With the arrival of bullfinches, people learned about fast frosts and blizzards. If you see a bullfinch, then know that winter will soon take power into your own hands and you need to dress warmer.

If the snow fell early, then the spring will be early. If the ground is covered with a thick layer of snow only by the end of December or in January, then spring is expected to be protracted.

If there was little snow all winter, then summer will be very dry. It is possible that there will be a drought, and rains will be rare and short. In the old days, such a sign meant a catastrophe: after all, if there is no rain, there will be no good harvest.

If already before mid-December a lot of snow fell, then in the beginning of summer there will be frequent heavy rain.

If there is little frost in the winter, and it can be called relatively warm, then this folk sign tells us that the summer is coming cold.

If the crows caw and circle over the houses in large flocks — this is to frost.

If the smoke from the chimney is a pillar, expect a bitter cold. If the smoke leans to the side, then this sign heralds warm weather.

Sparrows scream — to a blizzard and blizzard. If sparrows play and tweet with the whole pack, then this is a precursor of a thaw.

If the sky over the forest is blue — this is to the arrival of heat and a small snowfall.

If the cat in the house went to bed at the warmest place — this is a bad sign, wait for the onset of cold weather.

If it snows in large flakes, then it is in wet weather and blizzards.

The sky at night is clear and the stars are clearly visible — to be hard frost.

If in the winter flies appear in the house and begin to fly around the room — this will soon be warming.

If the day the sun is covered with haze, then it is to the approach of bad weather and blizzard.

If you hear a strong echo in the evening — be frost.

Signs of the future

Most people will take the winter predict the weather for several weeks ahead, and also indicate the weather conditions of summer and spring. But besides this, in the winter it was possible to learn about your future.

If you see a shooting star on a winter night, you will be happy all year.

Slip on level ground — to the good news.

To see a coin in the snow is a good sign, foreshadowing a quick profit.

There is still a national sign, according to which you can know your future for the year ahead. For this you need to fall back into the snow in such a way that the whole body is imprinted on the snow from head to toe. After that, you need to get up and carefully see your fingerprint.

If the head is small, the year will pass without any problems and worries. If big — the whole year will spin like a squirrel in a wheel. If the imprint is even — the year will be happy, if there are strong dents, then you will face many difficulties.

If you want to know your future in detail, you can do it on our website.

Winter omens always helped people find out the weather in the future and predict the upcoming events of their lives. Should I trust them? Perhaps, in some cases, it is just necessary! Meteorologists can be wrong, but nature will never deceive!

So we should be more attentive to any prompts of Mother Nature, only then she can reveal her secrets to us. Have a pleasant and joyful winter, and do not forget to press buttons and

What breaks a mirror in the house: deciphering the meaning Broken objects always cause a keen interest — all interested ...