Главная » Prayers » Exaltation of the Life-giving Cross of the Lord: Customs, Traditions and Prayers

Exaltation of the Life-giving Cross of the Lord: Customs, Traditions and Prayers

Exaltation of the Life-giving Cross of the Lord: Customs, Traditions and Prayers 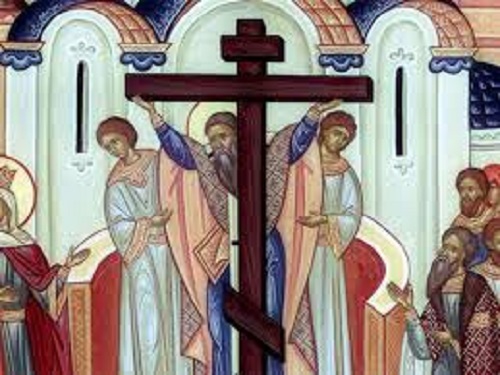 One of the main church holidays, called the Elevation of the Cross of the Lord, has a rich history and many traditions observed in the Orthodox world.

Every year, on September 27, believers celebrate the great holiday of finding the Cross on which Jesus was crucified. After a long search, the shrine was handed over to the church, and each Christian was given the opportunity to touch the relics, heal from ailments, and offer prayers to the Supreme Powers.

Customs and traditions of the Exaltation

On this day, all Orthodox Christians go to church for an all-night vigil, and at the end of the service in the morning they touch the Cross. His priests are left until October 4 — the day of giving the holiday of the Exaltation.

In ancient times, on the day of the holiday, it was customary to conduct a religious procession around villages and villages. Thus, our ancestors with the help of the Higher Forces defended their families and homes from all sorts of misfortunes, illnesses and failures. During the holiday, the last sheaves were taken from the field to get a rich harvest next year.

According to custom, this day was banned hiking in the forest. It was believed that on September 27, the entire fauna is preparing for winter, and to disturb him — it means to turn on the troubles. Respect for nature, in harmony with which our ancestors lived, did not allow us to engage in late harvesting and firewood collection on this day.

Under the ban were other works that could disturb the peace of the earth.

Also at the Exaltation, they feared rampant evil spirits, which organized «gulbishcha» before the arrival of winter. Not a single living person should cross the border of the forest in order not to collide with the raging spirits of the forest. Such meetings threatened not only poor health, but also health problems, as well as damage or the evil eye.

During the celebration did not forget about the home guardians of the hearth and comfort. The so-called ovinich, spirits at home, on this day received treats. It was believed that the coaxed spirit would protect the house and cattle from the negative throughout the winter.

On holiday, they did not stint on alms to beggars. Cooked lenten treats were taken to church or distributed to those in need with the best wishes. Such generosity always paid off handsomely, and the welcoming hosts were lucky.

A church holiday involves shyness and temperance, so on this day they fast to avoid ill health.

Young people on this day sent matchmakers to the girls who had attracted them in order to gain their favor, and the older generation went to church. From her house they brought three candles, which were placed in the corners and read prayers.

On animals on a holiday, amulets and amulets, protecting against any manifestation of evil, were hung.

Prayers on the Feast of the Exaltation of the Cross

“Lord Almighty! Save and save all those living on the earth, bless the righteous one with life, let our voluntary and involuntary sins be forgiven. Humbly we appeal to Your Divine essence and hope for forgiveness.

“Honest Cross, save my soul from negativity and devilish intrigues. Save my mind from any evil manifestation. Do not let my body weaken, let the spirit get stronger. Let our Lord hear our prayers, let him help both in sorrow and joy to preserve the true faith, unshakable, with the tears of the Most Holy Virgin Mary, and with the blood of the Lord washed.

On the Day of Holy Cross, you should spend time with your family and spend it in peace and joy. In ancient times, after worship, families gathered for a festive fasting dinner, where they continued to offer prayers and thank the Higher Forces for food, shelter and a happy life without deprivation. We wish you joy and prosperity, and do not forget to press the buttons and

Shestopsalmie: text of the prayer in Russian, numbers of psalms, how to read

Miraculous Icons: a list of the most powerful relics

What is penance and for what sins can impose it

What does it mean — Anathematized

What does it mean — Amen — in Christianity

How is the church different from the temple, cathedral and chapel?

The Grail: what is it, the story of a legend

Christianity and Orthodoxy: what is the difference, the main differences

Morning prayers: text in Russian, how to read

Morning and evening prayers: how to read Church Slavonic, text

The amazing power of the All-Tsaritsa icon, whom can she help?

The Tolga Icon of the Mother of God: how does the miraculous image help, prayer

The sacrament of unction: the essence of the ceremony, for whom it is intended, how to prepare

The sacraments of the Orthodox Church: a brief description and meaning

Passionate Icon of the Mother of God

Old prayer to Peter and Fevronia for marriage

The Presentation of the Lord: what a celebration, when celebrated, history

Spiridon Trimifuntsky: life, what it helps, how to pray

Mortal sins in Orthodoxy: a list of vices, the meaning of repentance

Symbol of Faith: text of the prayer in Russian

Prayers for the conception and birth of a healthy child Children are happiness, and each couple sooner or later decides ...

Strong prayers from drunkenness, alcoholism of men or women

12 strong prayers from drunkenness, alcoholism — which holy to pray? Never need to give up if drinking a close ...

Strong prayers from drinking husband In the fight against drunkenness of loved ones, all means are good — a strong ...

Strong prayers for work: for help to find and settle

Strong prayers for work: when looking to find and settle Prayers to the Lord and the patron saints will help ...