Главная » Numerology » Moles on the body: their meaning and influence on fate 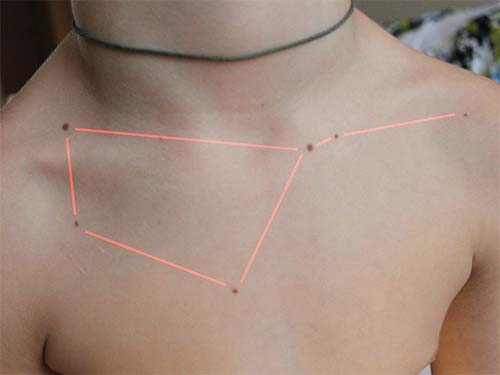 In astrology, there is a direction that studies the appearance of moles and their influence on human life from the point of view of planets and stars. Morphoscopy allows you to find out the cause of the appearance of moles on the body. Having even the initial knowledge of this science, one can easily decipher the meaning of the mole.

The basis of this direction in astrology is the doctrine of Yin and Yang, that is, of the masculine and feminine principles. The human body is divided into two sides: the left side, ruled by the Moon, is female, the right side, under the protection of the Sun, is male. Moles on “their side” are a good sign.

Such an arrangement of marks indicates that a person is leading in his field, has patrons and can independently manage the situation. If the moles are on the unfavorable side, their influence will be very weak, and, possibly, pernicious.

According to morphoscopy, the human body is divided into 12 zodiacal zones. Each corresponds to a certain sign of the zodiac. The zone that corresponds to your zodiac sign has a special meaning and directly indicates your destiny.

The head is the zone of Aries. Birthmark on the forehead speaks of a person active and energetic. The mark on the chin indicates strength of will and perseverance. Moles on the cheeks will talk about relationships with people.

Moles around the mouth indicate sensuality. The mark on the nose speaks of determination and aggression.

The neck is the zone of influence of Taurus. She points to the availability of money and health. The man with birthmarks on his neck is hard-working and financially secure.

Arms and shoulders — Gemini zone. A lot of moles on «their side» speaks about sociability and interpersonal skills.

The chest is a zone of Cancer. This area is responsible for family values. The birthmarks on the chest can recognize the difficult childhood and the nature of the relationship with parents.

On the right — independence and lack of attachment to relatives.

The back is the zone of the Leo zodiac sign. She is responsible for luck, success, independence, generosity and kindness.

Upper abdomen — the zone of the Virgin. Signs on «their» side indicate the consistency of the individual in professional and personal terms. A birthmark on the navel is a sign of good luck.

The loin is the zone of influence of Libra. Moles on “their side” mean harmony with oneself and the world around, sincerity and openness.

The groin is a Scorpio zone. Moles on this part of the body will tell about the intimate life of a person. Markings on “their side” indicate attractiveness for the opposite sex.

Buttocks and hips — Sagittarius zone. Birthmark on «his side» — a sign of moving and traveling.

Your knees are the zone of Capricorn. Moles on this part of the body speak of success in their careers.

The drumstick and calf is the zone of Aquarius. Moles in these places testify to activity and desire for freedom and justice.

The feet are the Pisces’ patronage zone. Moles on the feet speak of high spirituality and human self-development. Be attentive to your body and do not forget to press buttons and