The principle of removing damage with the help of special rites is that the negative program is transferred to any object, which is subsequently destroyed. The interpretation of the removal of spoilage by an egg lies primarily in the presence of a durable shell in it.

Due to this, the egg does not allow negative forces to break back. They are destroyed completely after the completion of the ritual of removing damage. Remember that must be used raw chicken egg, which has the most energy.

In the boiled egg, the energy potential of nature is completely lost, so it is not able to absorb the negative impact. 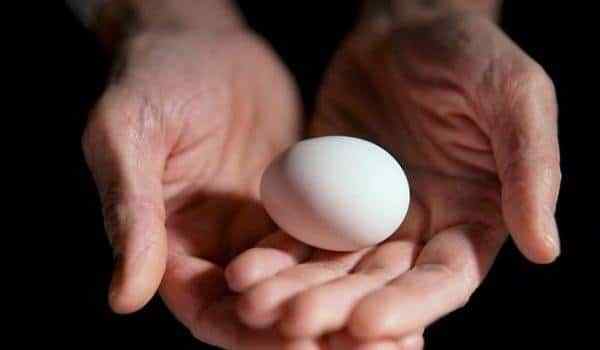 Very often, rolling out the spoilage egg. This is a very simple, reliable and very well-known method.

This method removes the evil eye and a small damage. Rolling out damage can be done at any time, but the greatest effect can be achieved with a waning moon.

This is also quite understandable, because from the point of view of bioenergy, it is best to throw away unnecessary or useless things at this particular time.

Rolling out damage to the egg should be in a circular motion counterclockwise, starting from the center of the abdomen. This is due to the fact that according to the laws of bioenergy, positive energy enters the human body clockwise, while the negative leaves it counterclockwise.

Thus, removing damage in this way, we facilitate the opening of energy channels for the receipt of positive energy. At the end of the procedure for removing damage, the egg rolls around the head.

After rolling out the egg is broken and poured into a glass filled with water, and then thrown out (better to mix the mixture with the shell into the ground).

It is important during the rite not to tear the egg from the body. A prerequisite for the ceremony is reading the prayer. «Our Father» throughout the ritual. Other prayers will help strengthen the rite, such as: Life-giving Cross and “Living in Help” .

Removal of egg spoilage is also recommended when targeting a strong negative impact. But in this case, it is recommended to use various additional magic items, most often, candles, icons. So icons should be placed around the perimeter of the room in which the ceremony is held, and before them light candles.

It should be remembered that the reading of the above-mentioned prayers during the ceremony should occur consciously and sincerely. This will significantly enhance the adoption of negative effects induced by ill-wishers by the egg.

To remove a strong damage with the help of an egg can only be a person who has a strong character, as the rite requires high energy costs. That is why very often in severe cases, victims turn to white magicians for help.

2019-09-27
admin
Предыдущий What will tell the horoscope for Aquarius in September 2018
Следующий Why dream to dance in a dream, Dream of Miller, Freud, Lofa