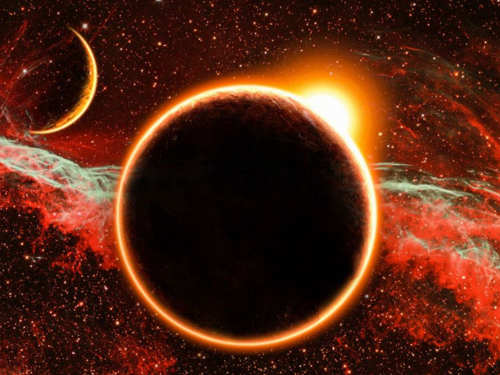 In July of the year, as many as two important astronomical events are expected. We are talking about the lunar and solar eclipses, which can leave a special mark on our lives.

These events will have a lot of negative consequences for each person, so these days conspiracies against bad luck and problems will be relevant.

This eclipse will be partial, therefore not particularly dangerous. The sun will be in the constellation of Cancer, which in general will be a rather positive fact. It will happen at 6 am Moscow time, but, unfortunately, it will be possible to see it only in the southern hemisphere of the Earth — in the region of southern Australia, in the east of the Indian Ocean and in Antarctica.

Astronomically, this event will be practically uninteresting, but astrologers say that some of the warnings should be taken into account in everyday affairs.

The main dangers of the coming solar eclipse will be related to the family. Perhaps on this day family ties will crack. You can even quarrel with those with whom you usually have the best relationship.

Of course, this can be prevented. This will require only a little diplomacy and a desire to go forward.

Starting a new case on the 13th is not recommended, as well as finishing. It is better to devote this day to measured work, monotonous work. The greatest difficulties can be expected by those engaged in physical labor.

This applies primarily to athletes. If you work in a large team, then you should also be more careful, because the influence of others on your motivation may be strictly negative.

A solar eclipse can adversely affect the overall mood. Emotional people can become very hot-tempered, and calm people can become apathetic and indifferent to everything that happens. And those and others in dangerous places should follow the rules and be extremely careful.

This is especially true of the roads — many due to reverie and lethargy can accidentally harm themselves or others.

It is better to avoid on this day any manifestations of originality. If you are invisible, it will allow you to get around the trouble.

Astronomically it will be a unique phenomenon. The lunar eclipse and the great opposition of Mars will occur in one day. The great opposition, otherwise called the maximum convergence, happens once every 15 years.

As for the eclipse itself, it will be the longest in the 21st century. This will be a special day that will go down in the history of astronomical observations.

The astrological meaning of a full and very long lunar eclipse is extremely important for every person and for mankind as a whole. More than an hour the moon will be closed by a shadow. An eclipse will occur in the Capricorn Sign.

This suggests that on July 27, people can become very aggressive, impulsive and extremely nervous.

The creative fuse of many of us can disappear abruptly. The sun and the moon will suppress each other, but, of course, the sun will mostly act as an aggressor. For this reason, any collaboration can be ineffective.

On such days, the productivity of large enterprises suffers greatly, because product quality is deteriorating, there is a lot of rejection due to mistakes and indiscretions of employees.

A special imprint of the lunar eclipse will impose on the sphere of love. In amorous affairs it is better to rely not on intuition, but on common sense. The universe can start to confuse you, forcing you to constantly go the wrong way, relying on only one luck. Adventurism will be the most important enemy of stability in relationships and in marriage.

As for new acquaintances, they may turn out to be promising, but it’s not worthwhile to schedule first dates on the 27th. It will be very difficult to create a favorable first impression on such a negative day.

Learn to manage your emotions to prevent a possible failure in love, finances and other areas of life. Undoubtedly, a solar eclipse on July 13 and a lunar eclipse on the 27th will be very dangerous moments of this summer. Good luck, and don’t forget to press the buttons and

2019-05-14
admin
Предыдущий Calendar of favorable days of the week from October 26 to November 1
Следующий Compatibility of the eastern and zodiac horoscopes: your real sign