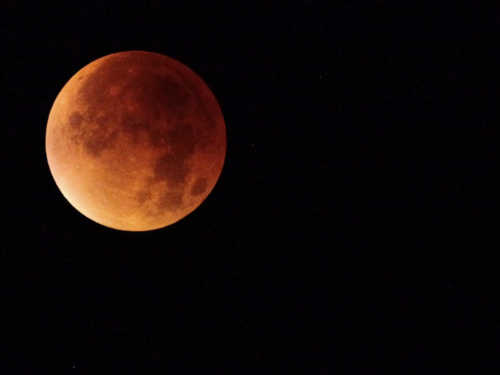 On August 7, the Bloody Moon presented a fascinating spectacle that many could observe with the naked eye. If for some reason you missed this event, the photos collected by eyewitnesses of the event will help you enjoy the view.

The second lunar eclipse took place on August 7th. All residents of Russia, with the exception of the Far Eastern Territory, as well as eyewitnesses from Europe, Australia, Africa, Asia, Antarctica, could observe this mysterious astronomical event without leaving their apartments. Everyone could just look at the sky and enjoy the incredible and rare astronomical phenomenon.

Moscow time, a partial eclipse of the Moon occurred from 9:00 pm to 9:20 pm and lasted for about two hours. He was given great importance not only by astronomers and astrologers, but also ordinary people. Many looked forward to this event, which allowed a different look at all life aspects.

On the evening of August 7, the night star passed its apogee — the point of its orbit, the most distant from Earth. During the eclipse, the Moon plunged to a quarter of its disk in the earth’s shadow and acquired a burgundy shade, for which it received its name — «Bloody Moon». This is truly a fascinating, frightening and unique spectacle.

The powerful influence of the moon on the human body has not yet been studied. However, the fact that the night star, especially during the eclipse, leaves an imprint on our behavior, desire and feelings is a long-established fact.

The eyewitnesses, who had been waiting for the unique astrological event for so long, hurried to the very next day to please the people, for some reason who missed the eclipse period, with pictures of the bloody Moon.

First shot was made in Malta, where the view of the partially closed moon is distorted by hot air streams from chimneys.

Second shot was made in Greece, where the moon shone over the temple of Poseidon.

Third shot, made in Indonesia, shows us a lunar eclipse, framed by volcanic ash.

Sixth shot shows us the long-term exposure of a partial eclipse of the moon in Germany.

Seventh shot demonstrates a lunar eclipse as witnesses from Kenya saw it.

Eighth shot from Russia, where the inhabitants of Krasnoyarsk observed a bright bloody moon.

Tenth shot was made in Odessa.

Unfortunately, in Moscow, the Moscow Region and Central Russia at the time of the lunar eclipse, cloudiness prevailed, which closed the beautiful view of the Bloody Moon. But this is no reason to be sad: in August, the inhabitants of the Earth will also be able to observe a solar eclipse, which is no different from a lunar one in its beauty.

The secrets of the universe are incomprehensible, but maybe someday they will open their veils to us and allow us to find answers to interesting questions. In the meantime, we can only admire the attractive and mystical beauty of cosmic objects. Be happy and do not forget to press the buttons and

2019-05-10
admin
Предыдущий The mystery and meaning of the name Eliza
Следующий Comic horoscope: how to find a husband on the sign of the zodiac