How to find out your fate by date of birth

The figures have long been given a magical meaning, mystics and philosophers have tried to decipher the mystical meaning of numbers and understand what their influence on the fate of man. The teachings of Pythagoras, Egyptian letters and Neoplatonic treatises have reached our time.

But only Kabbalistic numerology representatives managed to preserve their traditions in modern times, claiming that the date and the name of each person contain karmic numbers of fate.

Pythagoras was successful not only in mathematics, but also in philosophy, mysticism, was initiated into priests. He managed to found a closed school where he studied the secrets of numbers with his students and developed the foundations of modern numerology.

When asking for help from figures, in order to know their future, people most often use the designs of Pythagoras.

Analyzing the date of birth, you can know the world and its essence. According to the teachings of Pythagoras, all numerical values ​​can be reduced to a single.

Each number on a scale from 0 to 9 has its own energy and properties that are able to describe a person’s life. Anyone can independently learn their purpose by learning to compose the Pythagorean numerological square.

Before you begin to fill the cells, you need to make some simple calculations. The results obtained are introduced into sectors of the square, and then they are analyzed.

This allows you to study the character, ability, compatibility, mental characteristics of a person and much more.

As an example, calculations are given for a man whose birthday fell on June 17, 1981. The date must be presented in the form of numbers: 17.

33 is the first working number..

6 is the second working number.

31 is the third working number.

To find out what life a person lives by, one needs to count the number of digits in both rows. In this case, a man came to earth 13 times. According to Pythagoras, man lives 15 earthly lives.

After that, his soul is sent to more perfect worlds, for further rebirth.

When all values ​​are found, it is necessary to fill the cells of the Pythagorean square:

Each cell characterizes certain properties of a person:

It remains to decipher the values ​​obtained:

Numerology proposes to explore the fate of the person’s first and last names. With this technique you can learn the abilities, inclinations and character of the individual. Even fate will not be secret.

To understand yourself and find the true purpose, you need to subject your full name, patronymic and last name to calculations. With their help, you can determine the number of fate, which plays a special role in the life of each person.

This technique will allow women to find out whether to change the name during marriage, or still leave your own. To do this, it is enough to calculate the initial and future data, compare the results and draw conclusions about further actions.

All letters of the alphabet are tied to a specific number. To calculate the number of fate, you need to add together all the values.

Actions should be carried out until a clear result is obtained. 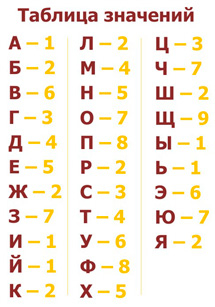 For example, for Irina Ivanova, the calculation would be as follows:

It remains to decipher the result:

Karma is created by man himself in the process of rebirth. This value predicts a fate that cannot be changed.

But everyone can smooth their fate by doing good deeds and actions. It is very important to understand and understand the mistakes made during life, to avoid their repetitions and not to mess things up with new ones.

Then in future reincarnations a person can achieve happiness. To determine your own karma, you need only a date of birth.

The calculation of the karmic number of fate is simple, does not require special knowledge in numerology and helps to determine the future life. To do this, add together the number of dates of birth.

If the karmic number turned out to be two-digit, then it is considered that the first digit denotes the person himself, indicates the correct path, and the second helps to study the past life.

But it happens that when adding an unambiguous result is obtained, then a person must identify all the mistakes he made on his own and disassemble them without help. Fate did not give clues, believing that this person is able to independently cope with their problems.

The unambiguous result is considered the second value and is responsible for the years lived.

If it turned out to be an even value, then it means that fate has appointed a certain person who will help in difficult moments, with such an assistant you can work out the karma easier and faster.

If the result is odd, then the person’s life will only meet people who can bring additional problems to fate. Solving difficult tasks for themselves, the person will be able to cope with their decision, and karma will work, but it will be given too hard.

A karmic figure is given to a person for a reason; you need to memorize it and study its interpretation. This will help in the future to identify situations that will help to work out karma and avoid mistakes:

To find out the number of the fate of your own child, it is necessary to carry out simple calculations. Just as in the calculation for adults, you need to add the numbers of the date of birth of the baby.

2019-09-02
admin
Предыдущий What dreams to get a gift for the dream of Miller, Freud, Lofa
Следующий How to find out who was in the past in life