The jester card, in tarot cards, is presented in a classic form. It depicts a man who stands alone at the edge of the abyss, and looks at the sky. His whole appearance suggests that he does not notice the danger and neglects it.

Sometimes the Jester is dressed in a colorful costume, and on his head is a cap with bells. Very often the map shows a dog trying to pull a person away from the abyss.

This card symbolizes the beginning of a person’s life and always foreshadows any undertakings or the emergence of new opportunities in real life in various fields. According to its internal content, the card focuses on the fact that it is very foolish to expose oneself to dangers.

And from the point of view of personal development, the Jester hints that you need to reconsider your attitude towards life, because in many matters you are mistaken. 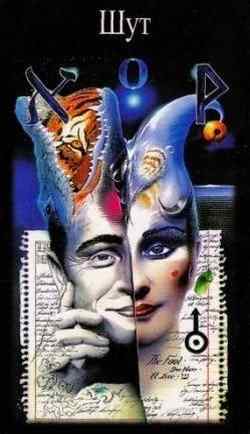 The Jester card in a direct position emphasizes that any decisions in a given life span are accompanied by a certain amount of risk. But he is fully justified, if the actions of a person take place against the background of pure intentions. Jester very often falls in the layouts on the eve of the period of poverty.

He may also be a harbinger of meeting with new love.

This is a sign that unplanned events may occur in life in the near future, which will cause a surge of energy and inspiration. In addition, the map indicates that you should not rely on the past, but rather move confidently towards new goals, accepting the challenges of fate.

On the other hand, the Jester stresses that a careless attitude towards life can be very harmful.

In particular, this card:

The jester in a direct position falls, as a rule, to a carefree person who does not adhere to any life conventions. The card advises with ease and curiosity, without any prejudice to perceive everything new that comes into your life.

If you have the opportunity to start a new business, then be sure to start it without thinking.

In the upside down position, the Jester card symbolizes nonsense and chaos. She always warns about the unjustified nature of any risk in a given period. Any thoughtless actions and decisions will lead to failure.

The jester indicates that apathy and stagnation, betrayal and deceit reign around the person. It should not be in the clouds, you need to remember that all plans must be realistic.

Impulsive actions in this period can not only harm, but also have fatal consequences.

An inverted position indicates that a person is determined to last cling to his own opinion, and this can harm him. You need to force yourself to listen to the opinions of loved ones who can be trusted. The traditional interpretation of this position is always associated with stupidity, which does not allow to act rationally.

This card advises in reality not to gamble, not to make hasty steps and hasty conclusions.

In other areas, the Jester map, in an inverted position, may indicate the following:

The card personifies reckless and impermanent people who are capable of doing rash acts without thinking about their consequences. Sometimes the lasso indicates that there are eccentric people in the person’s environment.

2019-12-16
admin
Предыдущий What does it mean to fall into the mud in a dream?
Следующий Read the plot to sell the car yourself