Tarot divination for relationships and love

Tarot fortune-telling on relationships is in high demand. This method of prediction allows you to find out the thoughts and feelings of your loved one, and therefore, understand how to proceed further to promote the development of relationships. It should be understood that only a person with a developed natural intuition can guess truthfully on the Tarot cards.

Such fortune telling is a kind of instrument with the help of which a bridge is created to the abilities and inner world of a person. 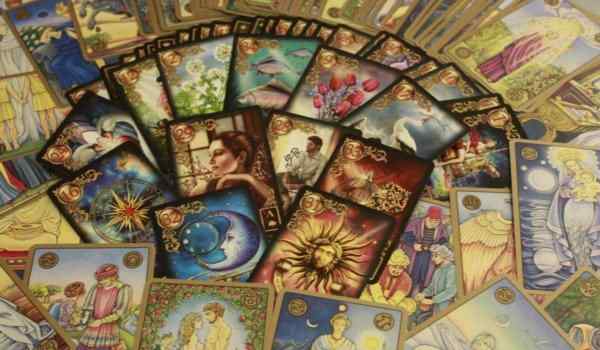 If you are a beginner and take the first steps, mastering predictions using tarot cards, then you need to get acquainted with the basic rules of the rites. The first thing to take care of is the right mood, without which it is impossible to get a reliable prediction. Divination by the Tarot cards on the relationship provides for the creation of a special atmosphere in the room where the fortune telling will be held.

To do this, use special candles that can be purchased at esoteric stores, as well as aromatherapy products. In addition, in the room in which the fortune telling is planned to be held, it is necessary to remove all unnecessary things, and cover the table with a special tablecloth.

Attention! Remember that fortune telling on tarot cards cannot be performed if you feel bad. When you have a headache or you feel a general malaise, you will not be able to concentrate on the scenario and pull out the correct cards.

Tarot cards should be taken with clean hands. If for any reason you are not satisfied with the answer to the question, you cannot re-draw the card from the deck, hoping that another card will provide more positive information.

It is very important to remember that in no case can you lay out the tarot cards to the person to whom you feel dislike.

The question of developing relationships with a loved one is always exciting. Any fortune-telling on the Tarot cards on relationships has a distinctive feature, namely, that a specific card must be correctly asked a question.

In addition, for a more accurate understanding, you need to know what different combinations of maps can mean. All transcripts of Tarot cards and their combinations can be found on our website in a special section. 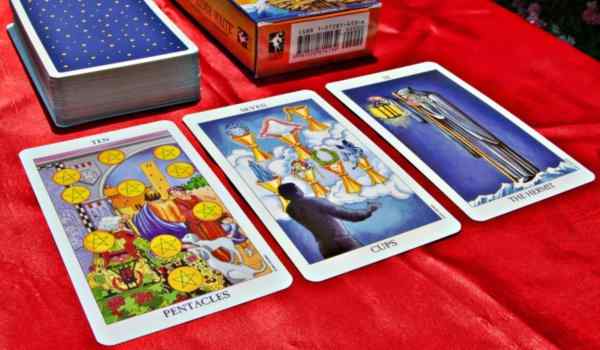 Tarot divination for relationships and love using a single card — a very popular type of divination. This method involves obtaining answers to specific questions by pulling an arbitrary card from the deck.

When executing a hand on one card, only senior arcane tarot cards are used.

Asked questions may be as follows:

You can ask other questions, the main thing is to formulate them exactly. When interpreting the answer to a question, the direct and inverted position of the card should be considered. Knowing the meaning of the map in accordance with the decoding, you need to connect your intuition to more accurately describe the life situation.

You can also ask simple questions that require a yes / no answer. In this case, you must take into account either the direct or the inverted value of the map.

The card from the deck is allowed to be pulled out in an arbitrary way, asking a specific question. But professional fortune-tellers recommend laying out the entire deck of cards on a special table-cloth with their shirts down and then choosing an arbitrary card.

Such layouts also belong to simple ones, and you can decipher them yourself according to the decoding of the Tarot cards. For conducting divination, it is also recommended to use only senior arcana tarot cards. You need to carefully shuffle the tarot cards.

Guessing love and relationships can be reliable, if you shuffle the cards, you will sincerely believe that the information obtained will be reliable. It is possible to interpret the hand values ​​on three cards in different ways.

The most commonly used values ​​are:

An extended version of divination is often used, when the fourth card is pulled out of the deck. It shows the prospects for the development of relations in the distant future, in case the guessing person uses the advice of the third card.

Alignment «Three cards» is considered universal and can be decrypted in different values.

The most popular interpretations are: 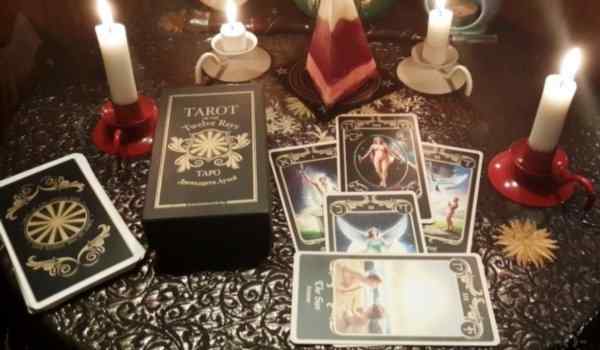 For the hand, seven cards are used, which are laid out as follows:

It is very important to draw the cards out of the deck, to form a column that characterizes a partner, to visualize a person, to present his appearance, to recall his habits and behavior.

Unfolded cards are treated as follows:

This type of fortune telling helps one to understand who is wondering why his partner behaves in a certain way in real life, and how deep the existing relationships can be so that they can be counted on in the future. At the same time, if Kings, Knights or Ladies appear in this situation, that is, the court Arcana, then they symbolize specific people who can influence the relations of partners, on which fortune telling is carried out.

So, if in the column of a man, the Lady fell out, then this is, in most cases, a woman close to him, with whom he maintains a waking relationship. But if she fell out of the seventh card, that is, in the first row, then this woman is a friend, but not a sexual partner at the present time.

But at the same time, it is possible that the person to whom fortune telling is being held has plans to get close to her.

When the Lady falls in the second line of the sixth card, it means that the chosen one loves another woman. In the third line, the Lady means that a man for some reason tries to demonstrate feelings towards another woman, but there is no serious connection between them.

Knights and kings in the column of men indicate that the soul is filled with jealousy:

Similarly, the courtiers of the Arcana are interpreted in the woman’s column. Only in this case Knights and Kings designate other men, and Ladies — jealous feelings.

When one of the courtiers of the Arcana falls in the center of the first card, it means that between the people who are being guessed, there is someone third.

For this alignment, ten cards are used, which are laid out in the form of a pyramid consisting of four rows. Such divination can be considered universal.

Women, as a rule, choose it to get predictions about marriage or relationships with a loved one, and men use this alignment to understand how relations with business partners will develop.

The cards are treated in rows as follows:

There is a simpler version of the pyramid. It uses four cards.

Most often, such divination is used by lovers to clarify relationships.

First, the first card is laid out, and then the cards are laid out as follows: 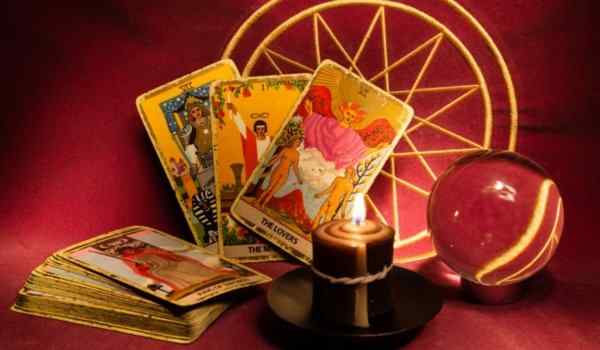 This alignment is treated as follows:

In simple hands, only the older Arcana are almost always used. Their values ​​can be studied in a special section on our website. It should be noted that welfare in relationships is foreshadowed by the cards Lovers, Justice, the Sun or the World.

A positive sign is any combination of them. If the Moon falls in the balance, then this underlines the importance of the emotional component for the further development of relations.

The Court map indicates the presence of a karmic connection between the partners.

The hermit, the Clown, the Tower and Death are considered as separation cards. If the Devil falls out, then this may be a harbinger of betrayal of one of the partners. An unkind sign is a man hanged in a man’s column.

It may indicate an enthusiasm for alcohol, as well as other addictions.

When performing fortune-telling on relations using Tarot cards, it is necessary to remember that any prediction is the most likely way of development of events, but it is not at all necessary what exactly will happen in real life. The random factor, which is always present in reality, can completely change the prediction.

This means that if you are not satisfied with the information obtained during the fortune-telling, then by your actions you can change real events and affect future relationships with a partner.