Главная » Cooking » What to replace milk

What to replace milk

In life, everything starts with milk, but it happens that the relationship with him does not add up immediately or breaks later.

Some are allergic to milk protein, others are intolerant to milk sugar, some are vegans or raw food eaters in general. The question “what to replace the milk with” during the posts is relevant.

So what options do we have? 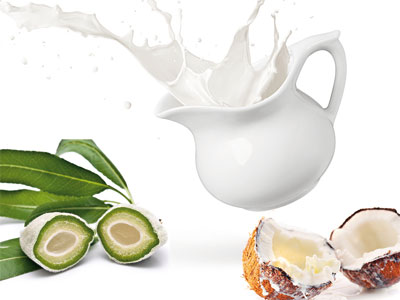 To deprive milk of all deficiencies, namely, to make it hypoallergenic, lactose-free and not offending the identity of cows and other “dairy” animals, it is necessary to completely change its essence. From animal product to transform into plant.

Yes, it will be a completely different drink, but who said that it will be bad?

All over the world they have been drinking vegetable milk for thousands of years.

No, this is not milk, of course, but a drink made from soybeans. They are soaked, crushed, heated, and then passed through a filter.

Cheap, affordable and most popular substitute for traditional milk. The taste is, of course, specific, but the nutritional properties are very similar. Protein, though vegetable, and iron — more than in cow, less fat, cholesterol and lactose not at all.

Among the shortcomings, there is little calcium and B vitamins, especially B12.

Soy milk is sold in packs or in powder form, often enriched with vitamins and minerals.

There are “improved options” — with chocolate, vanilla, syrups or spices.

Stored in glass bottles for a week, in plastic — 2 days.

Why drink? It is recommended for allergies, lactose intolerance and iron deficiency anemia.

In addition, soybean contains phytoestrogens, which reduce the level of «bad» cholesterol in the blood, so the product can be useful for problems with the heart and blood vessels. As for use, feel free to replace them with milk in traditional recipes. Pour even into mashed potatoes, even into sauce for pasta.

Ready meals will have an unobtrusive nutty flavor.

Milk from cereals is also a success. Oats, rye, wheat — from which it just does not.

The most popular version of grain milk is rice, which is traditionally drunk in Asian countries, primarily in China and Japan.

Rice milk is usually made from brown rice, at least — from white, refined.

The taste is delicate, sweetish — natural sweetness appears in the process of fermentation, when carbohydrates break down into simple sugars.

Compared with cow’s milk, there is a lot of carbohydrates and B vitamins in rice milk, and there is a certain amount of fiber. It is non-greasy, the most hypoallergenic of all milk replacers.

There are also disadvantages — lack of proteins and calcium. Why drink?

The Chinese and Japanese have been drinking rice milk for thousands of years, according to tradition.

Europeans drink it out of curiosity, on the wave of interest in the Oriental kitchen, plus in cases of reaction to cow’s milk. Due to its fiber and carbohydrate content, this drink nourishes and improves digestion.

It is drunk both by itself and added to desserts.

Another source of milk rivers is nuts: walnuts, peanuts, cashews and, of course, almonds.

The general principle of cooking is the same — chop, pour water, let it brew, strain.

Almond milk was especially popular in the Middle Ages.

Firstly, it was the main product for the fasting, secondly, it was kept longer than the cow.

The main chip almond milk — it has a lot of protein and calcium. From this point of view, it is almost like a cow! It also contains magnesium, potassium, vitamins A, E, B6.

Why drink? The combination of magnesium + calcium + vitamin B6 is an ideal formula for strengthening bones.

A glass of almond milk covers a third of a person’s daily calcium requirement.

Vitamins A and E protect the skin from ultraviolet radiation, in addition, it is known antioxidants, rejuvenating the body as a whole.

Potassium is needed so that the heart is beating smoothly and the nerves are not naughty.

Smoothies, cocktails, desserts, soups are prepared on the basis of almond milk. However, often the recipe requires the use of roasted almonds.

So it is, of course, tastier, but, alas, less good.

Raw foodists, perhaps, in something are right.

Inside each coconut there is a splash of liquid — but this is not milk, but coconut water. Tasty, vitamin, suitable for use in cooking and giving a refreshing effect in the heat.

Coconut milk is made from the pulp of a coconut — it is crushed, for example, grated tinder, mixed with water, and then squeezed.

The consistency depends on the proportions — the less water, the thicker the drink.

Thick is used for making sauces and desserts, liquid — for soups.

Why drink? Coconut milk is quite high in calories — up to 17% fat, it contains many vitamins of group B. Ayurvedic tradition suggests that the drink helps with dehydration, loss of strength and skin diseases.

You can drink it with stomach problems — recent studies have shown that coconuts give a weak antibacterial effect.

. perhaps not a bird

In general, the milk is not driven except from the stool. From hemp, for example, it turns out excellent drink. It does not have a narcotic effect, but in it there is an excess of Omega-3 and Omega-6 unsaturated acids, there are valuable trace elements like magnesium, 10 essential amino acids, and hemp proteins are better absorbed than soy.

Sesame milk is an excellent source of calcium. In poppy milk, calcium is even greater.

Pumpkin seeds are easily transformed into a nutrient substance that supplies the body with iron, calcium, zinc and magnesium, which most blissfully affects the ability to think and not to get sick even in the midst of a flu epidemic.

Oat milk is made from flakes, but rather whole, unrefined whole grains of oats are a source of valuable dietary fiber that removes “bad” cholesterol from the body.

The general principle of cooking vegetable milk is simple.

Nuts and seeds are washed, soaked for several hours, crushed and mixed with water in a blender in a ratio of 1: 3. Then the mass must be pressed.

You can add something interesting to the drink: spices, fruits, sweeteners, syrups, poppy seeds, coconut flakes, rose water — in a word, everything that fits your idea of ​​the beautiful.

Get yourself a soy cow.
Previously, soy milk was made for a long time and manually — the beans needed to be ground, flour — cooked and filtered … Special combines — soy cows — simplify and speed up the process. The unit looks like a kettle, its main functions are to grind and heat. The production of a liter of milk takes 100 g of soybeans.

Time — 20 minutes. In countries where soy milk is traditionally used in cooking, primarily in China, soy cows are found in almost every household.

Some models can be used to make nut and rice milk.