Главная » Cooking » What do people drink in Japan

What do people drink in Japan 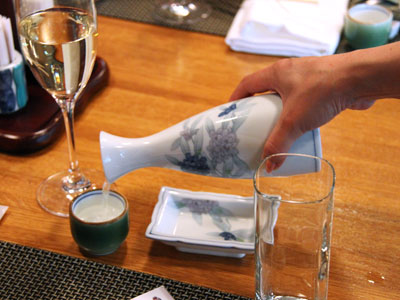 Actually, in Japan there are about 4,000 kinds of sake.

It is produced in almost all regions of Japan, but many consider it to be the best in quality. sake from Hyogo, Kyoto, Akita and Hiroshima prefectures.

The taste of sake can be sweetish — amakuti, medium — chuo and dry — kara.

In Russia, it is considered that sake should be drunk warm. Indeed, there is the option of serving sake warm (warmed to around 40 degrees), in this case it is called kansake.

The hotter sake is called atsukan and is heated to 60 degrees Celsius. In recent years, the supply of chilled sake is gaining fashion, especially in summer.

In what form to serve sake depends on the taste and on the type of sake itself.

Anyway, sake Do not boil and freeze.

Sake and all types of rice shochu (distillates) made from Japanese round rice.

But shochu (Shochu) can also be produced from corn, sweet potatoes, barley, sugarcane, sesame, buckwheat, melons, pumpkins, etc. Sechu is of different degrees of purification and, in principle, it is the most inexpensive of Japanese strong drinks.

The ways of using shochu are very diverse, but you should always drink it in small sips.

Okinawa has its own alcoholic drink, avamori (Awamori).

Historically Awamori (ava — foam, mori — many, in abundance) was the first distillate in the territory of modern Japan. Long-grain Thai rice and “black” Okinawan koji serve as the raw material for the production of the drink.

Awamori was a subject of special pride for the Okinawans, starting from the 17th century, he was sent to the court of the Chinese emperor and the Japanese Shogun. Awamori is a drink controlled by origin. It can be produced only on the islands of the Ryukyu archipelago.

Avamori is usually sold with an alcohol content of 25 to 35%.

Rules for Moderate and Reasonable Sake Use

It is important to know!
The Japanese call their country Nippon (Nihon) — which means “the beginning of the Sun”. The traveler Marco Polo in the 13th century introduced Japan to the rest of the world as “Dzhipangu” — “Golden Land”.

So, having modified a bit in different European languages, the name stuck. Modern Japan is a constitutional monarchy consisting of 4 thousand islands. At the same time, due to mountainous terrain and volcanic zones, only 25% of land is suitable for human habitation.

The four main islands of the Japanese archipelago: Hokkaido, Honshu (60% of all Japanese sushi), Shikoku and Kyushu. There is also the Ryukyu archipelago with the largest island of Okinawa.

The capital city is Tokyo (Tokyo is the eastern capital) with 13 million citizens.

To be continued: on Thursday, read about Japanese whiskey, beer and wine

Leonid Gelibterman:
“I was born almost in the middle of the last century.

At the time of the gourmet doctoral sausage, the cherished jar of Riga sprats in the New Year’s grocery set and apple wine of the type “Michurin’s Tears”. I did not understand my happiness when I scooped black caviar with an aluminum spoon from a three-liter glass jar from a construction team, and did not pay attention to the deposits of shrimp and squid in fish departments. I looked at the world through the eyes of Yuri Senkevich and dreamed of distant countries and cities.

How everything has changed … And even the joke of Zhvanetsky «I am in Paris on an urgent business!» Is not a joke at all.

And natural caviar of black already in the afternoon with fire cannot be found, and wine appellations appear in Russia. And I go around the world, I look, I absorb, I try.

For all interested parties, I hasten to inform you that in Ireland it’s not a pub, but a pub.

Irish people are very sociable, but they rarely visit.

2019-10-01
admin
Предыдущий What happens to your body in a year of veganism
Следующий What to do to the child eat? 10 steps in the right direction on