What and where to try in Sochi and the surrounding area

This summer, the average Russian has more chances to be on the Black Sea coast in the Greater Sochi region than on the Mediterranean resorts.

Fortunately today cuisine of the Black Sea Riviera capable of more than a kebab on duty and a glass of vodka on the table.

And it is possible that dinners in coastal restaurants and trips to the market will be a pleasant moment of the vacation program. 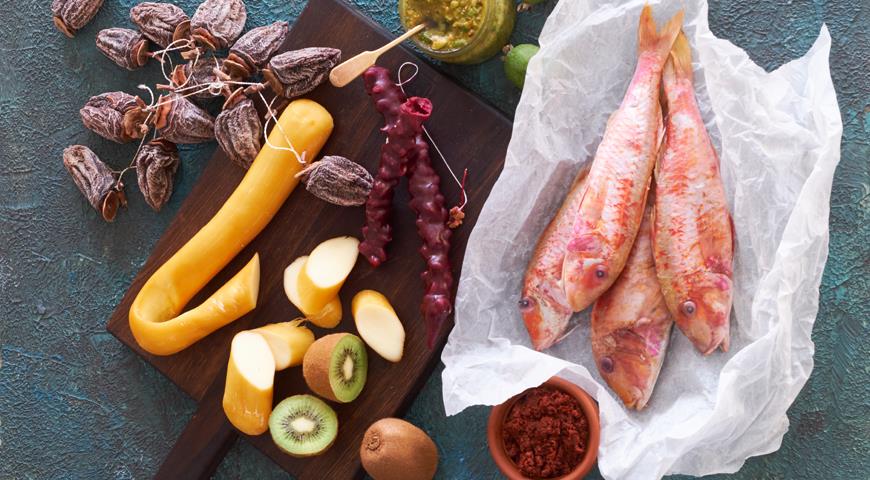 The cuisine of the Black Sea Riviera is an approximate concept.

One thing is Novorossiysk with its Cossack traditions, another is Anapa, where from time immemorial there was a strong Greek influence, a multinational Crimea was completely separate.

Like a puzzle, cooking of one or another segment of the coast is made up not only of sea wealth, but also of historical details and climate features.
In this sense, Sochi and the surrounding area is a unique place.

It so happened that in the compact territory of Sochi, people from many nations remained to live, work, sunbathe and prepare.

Style of Sochi cuisine — this is a mixture of styles.

It is not by chance that cafes and restaurants with a national flavor are good at the resort: Georgian satsivi, Armenian Khoshloma, Adyghe Khalyushi (fried pasties with cheese), Ossetian pies — for the local cuisine these are taken for granted.

And Adzhar-style khachapuri, it’s a “boat”, it’s also Ajarik, is so omnipresent that it can be easily put on the emblem of Sochi as a symbol of resort hospitality.

Everything mixed up, everything stirred up and the result came out absolutely original.

For example, seasonality, about which professional chefs speak so much, has always been a common thing here.

The easiest way to track it is in the central Sochi market.

Loud, dynamic, juicy, vivacity reminiscent of Spanish Boqueria: a riot of colors, the incessant hubbub of sellers and buyers trading with them.

The local ranks are famous for handmade cheeses sold by baleen Abkhaz aunts. It is absolutely brilliant round, goat, baked in the ashes, it is difficult to refrain from immediately buying hot pita bread and not eating the whole cheese head.

Great basturma — Levon from the second row. Churchkhela must be taken from Susanna, so without false modesty it is written on the sign — “The best churchkhela from Susanna”, although here she is really good — moderately sweet, without a floury aftertaste, with large hazelnuts.

For the next stalls they sell adjika, unripe kiwi sauce, persimmon jam, and Adygei chestnuts. Below, where the vegetable rows, — placer radishes, cilantro, portulaca, marjoram, tomatoes and spinach.

Since the Olympics in Sochi, the theme of local products has been seriously developing — on the market you can try smoked Circassian pears, Krasnopolyansky chestnut honey or buy a tin souvenir can with tea collected at the most northern tea plantation in Matsesta.

The only thing that confuses is the small number of local Black Sea fish. There is a frozen pike perch, there is a Chilean sea bass — and there are no hams and red mullets. Catch of fishing artels on the vine are bought by restaurateurs.

Having a rest a scad, a mullet, a sargana and a hamsa is easier «to catch» in a public catering, than in the market.

Unsightly, wrinkled in appearance, with a white mealy bloom (in fact, it is sugar that has protruded to the surface), inside it remains soft and elastic, similar to dense marmalade. 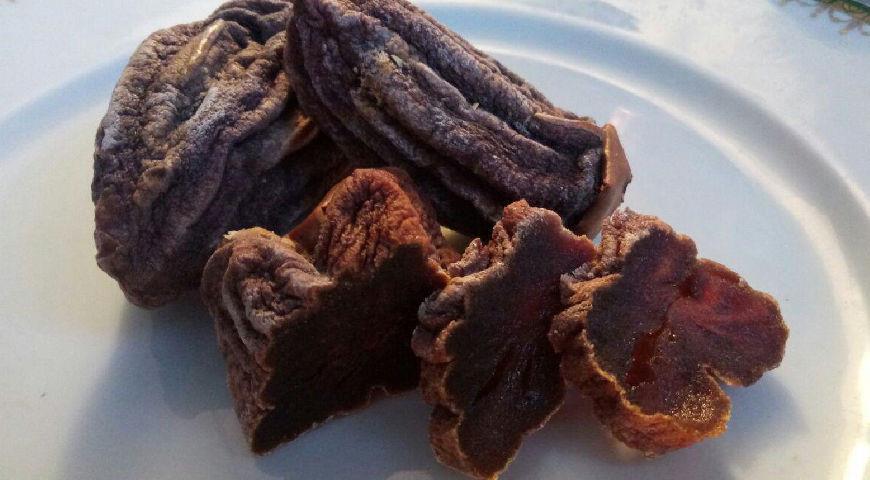 Blood-red, vigorously-peppered, deafeningly tasty — although in the Abkhazian adjika means only «salt», in fact it includes more than 20 ingredients. 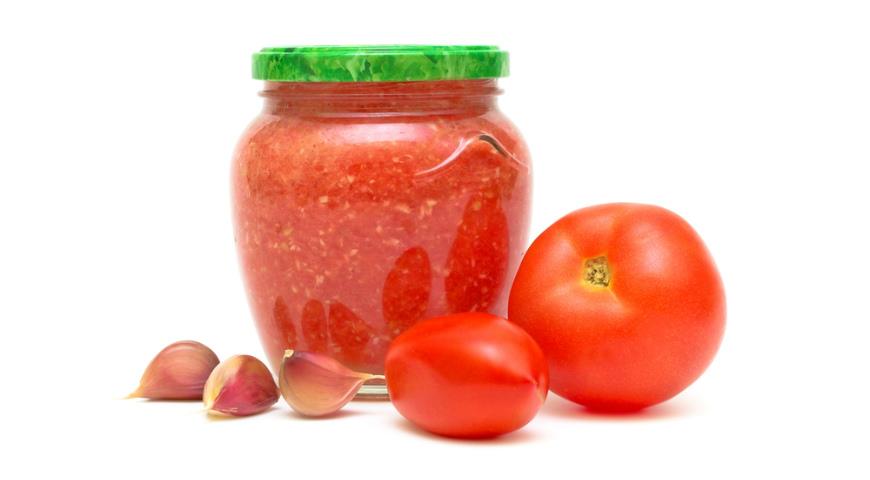 There are only ten types of suluguni: fresh, smoked, baked in the ashes and like this in the form of a hose: it is cut into pieces and fried on coals, like barbecue. 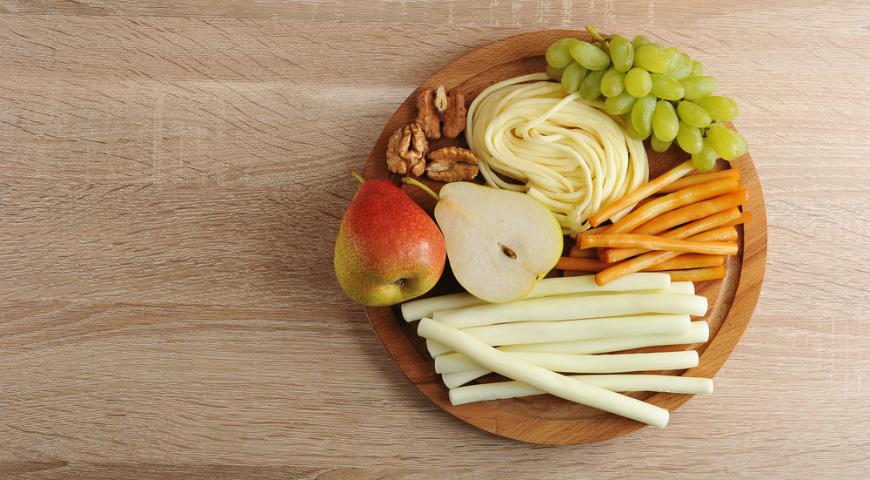 In the subtropical climate of the Feijoa coast of Sochi lasts by the middle of autumn, but it is possible to buy strawberry berry, which is wiped with sugar, in a jar all year round.

It happens all colors of the rainbow, with walnuts, hazelnuts, pistachios.

See that she was not too dry, slightly bent, but did not stick to her hands, this is considered to be an ideal condition. 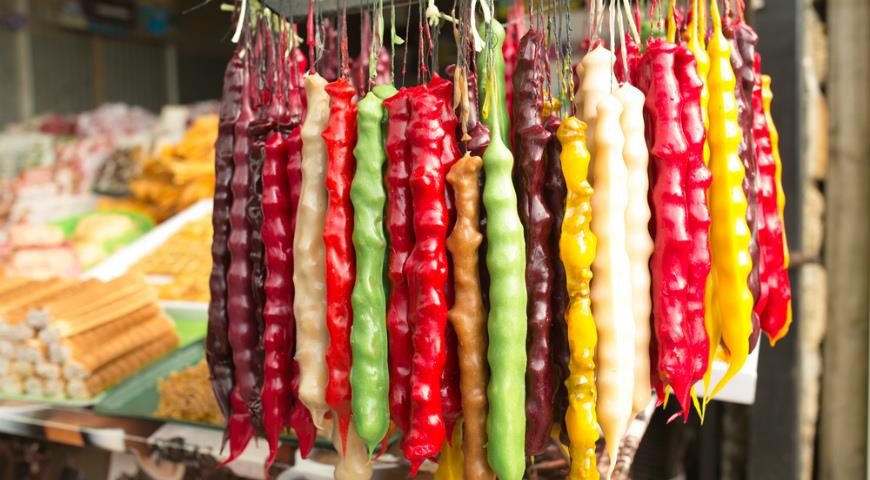 Churchkhela all colors of the rainbow

The tender fish according to the Sochi recipe is first fried in flour and butter, and then marinated.

But more delicious — smoked red mullet, which in the morning was still swimming in the sea. 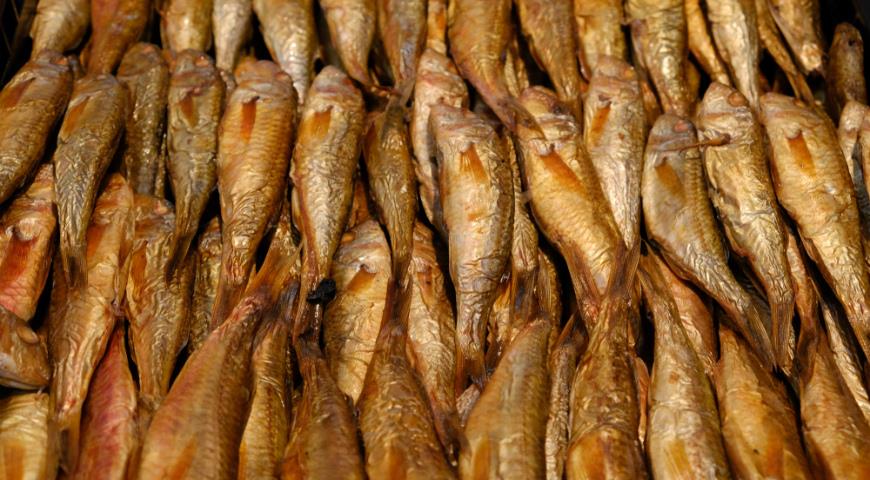 The first kiwis appeared at the Adler experimental station almost 30 years ago.

Today, 30 species of this exotic plant grow on the plantations along the sea; 40 tons of fruits are harvested each year. 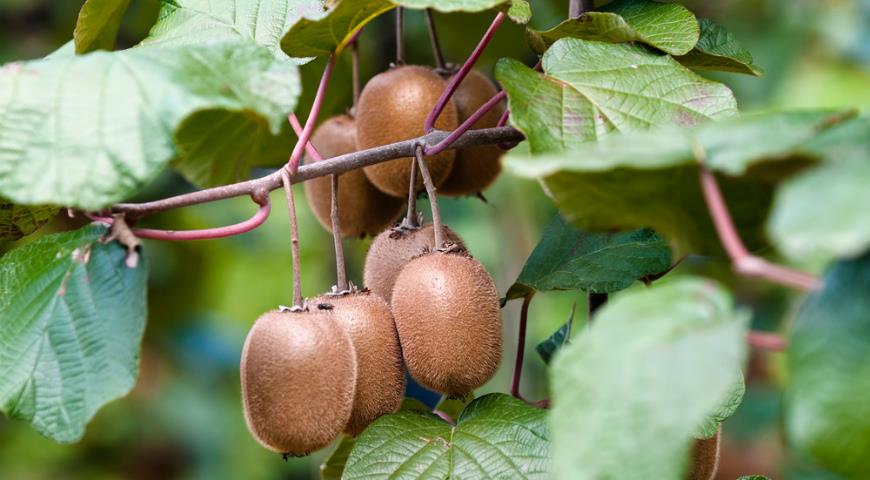 30 varieties of kiwi grow on the Adler plantations