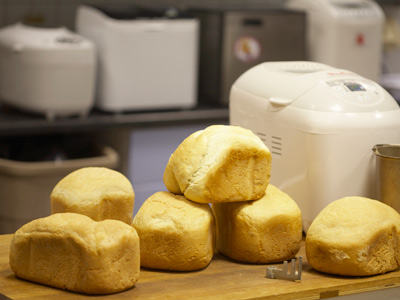 The writers, being humanists, did not go into the details of the work of the machines. You open the lid, you fall asleep something inside, you close it, you press the button — in a minute you get food. An amazing thing — bread machines work like this.

In a minute, however, do not fit.

The first bread maker appeared in the laboratories of the Japanese corporation «Matsushita» in 1986. Japanese engineers tried to create a device capable of occupying the same place in a western house that a rice cooker occupies in a Japanese house.

That is the main thing.

What is in place of rice in the European and American system of values? — the Japanese wondered and immediately answered themselves: bread.

And they developed a bread machine — a device very similar to a rice cooker, but for bread.

It took about ten years for home appliance manufacturers to pay attention to this invention outside of Japan.

For the sake of justice, it’s necessary to say that bread makers did not occupy the place prepared for them by Japanese technologists — the whole thing seems to be that bread has not been baked at home for many years, but is bought at bakeries, and it is impossible to remember the ever-rushing western man that once was different.

But for people who are seriously interested in cooking and healthy eating, bread makers were incredibly useful.

The fundamental and main difference of this device from all previously invented is absolute leak-tightness, first of all ideological. If the term “thing in itself” is taken literally, then the breadmaker will be the most vivid illustration of such an assumption.

And this circumstance has its pros and cons.

The downsides are that you can never fix it yourself, and also make any significant changes to the proposed recipe (this is not as scary as it may seem, since a recipe book is always attached to any bread maker, and commercially available mixtures are made up taking into account all specific requirements, most of which are common to a simple person not at home).

In addition, all the ingredients should be measured not by eye, but absolutely exactly (therefore, together with the breadmaker we advise buying more scales).

In short, the strictest discipline and no initiative.

Yes, yes, we did not make a reservation, if you absolutely exactly follow every single requirement of the operating instructions, you will receive a loaf of perfect freshly baked bread every day.

Or a baguette, or a cake, or pizza dough — since 1986 breadmakers have learned to do a lot more, besides simple bread.

By the way, if you decide to buy a bread maker, then these very additional functions can be a decisive argument.

Let’s start with the sweetest — bread makers know how to make jam, and most of them have a special program for this.

It is necessary to put prepared berries or fruits into the working container, add sugar, close the lid, press the button — in fact, that’s all. Get jam — fresh, tasty, homogeneous. And it will be a bit, so if you thought that a bread maker would help utilize a rich country harvest, then you thought wrong.

Over time, technologists came to the conclusion that the functions of kneading dough and baking itself would not be too bad to divide. So did.

Moreover, special modes have been developed for mixing different types of dough — for example, “pizza dough” or “ravioli dough”.

This is perhaps the most important additional part of the bread machine — because its presence can reduce labor costs for non-bread baking several times, that is, for dishes that you will bake not in the bread machine, but in the oven; decided to cook the pies — they took and cooked.

Who bakes, will understand what it is about.

No less interesting thing — the preparation of bread in the form of a loaf, and not a loaf.

To get a real baguette for dinner, though not a meter long, but it’s really just baked, you will agree that it warms the soul.

Almost all bread machines allow you to adjust the color of the crust — from pale to crispy, add additional additives to the dough, have the function of delaying the start (you can bake bread just for breakfast or dinner) and quick baking (about an hour).

As we noted above, the bread maker is the beauty and pride of engineering. However, with her from time to time there are troubles.

More precisely, not with herself, but with citizens who have decided to resort to her services.

And worst of all, when the bread rose, as it should be, it was baked as it should, and then, when it was taken out of the breadmaker and put on the grate, it was cooled down and picked up and fell off. What to do?

We decided to analyze these two primordially Russian questions and answer them, at least with regard to bread makers.

What if the baking cycle is over and the bread is still not baked in the center? That is, you have knocked on the side of a freshly baked loaf, as authoritative bakers advise, and the sound is wrong, deaf.

If literally, without analyzing the reasons for the incident, heat the oven to 170–180 ° C, place the failed loaf on the baking sheet, cover with foil and put in the oven. And bake.

How long it will take is impossible to say, but we recommend 10 minutes later. Remove the bread from the oven and re-check for readiness.

There are many reasons for non-penetration, and the most likely of them is excess liquid.

In addition, it may be that the dough turned out too rich, that is, with an excessively high fat content (suppose you decided not to skimp: put a little more butter or an extra egg, or it turned out without any intent — just the eggs were larger, and the yolks they are fatter than usual). Another reason is the excessive density of flour used.

This can be the case with oatmeal and rye flour, as well as if you use bran flour.

Next time, replace part of this flour with the same amount of wheat bread.

The last reason is less common, but this does not make it impossible — the breadmaker was overcooled.

Make sure that at the beginning of work, she had room temperature.

Who is to blame if the dough rises insufficiently or does not rise at all? You are to blame.

Because they took bad yeast. Bad means overdue or stored in an unsealed package.

Or because they allowed the contact of yeast with salt.

You, when you read the instructions, probably noticed the item «Procedure for making ingredients»?

And there it was written that salt and yeast should be poured in different corners? Oh, you did that?

Then they could allow two other misses — they used plain flour, not baking flour, in which there was significantly less gluten (gluten), or too little liquid was added.

In addition, the ingredients must be at room temperature (like the breadmaker itself), because at too low a temperature, the yeast will not start working at all, and at too high a temperature will simply die.

And who is to blame if the dough rises too actively and even gets out from under the lid? Well, who besides you? Well, maybe the weather is too warm — the bread maker overheated, and the process became more active.

Although it is much more likely that you incorrectly measured the yeast — more precisely, sypanul them with all my heart (just in case, we recall once again the need to use measuring spoons).

The reason for the hyperactivity of the test can also be excess sugar or salt deficiency.

And if the baked and cooled loaf of opal and turned into a square cake? What then? Then a loaf must be thrown away.

And so that this does not happen, carefully monitor the quality of the flour used. More precisely, for the content of gluten. The most desirable option is wheat flour of the highest grade, gluten is the most in it.

All other types and varieties are worse by default. And if you decide to modify the recipe, adding at random a certain amount of non-wheat flour or bran, or cheese, or mashed potatoes, know: you are risking! And with an increase in the mass of the designed loaf, you risk more and more.

However, this risk can be somewhat reduced by adding dry gluten (panifarin) to the dough.

In addition to these problems, there are others — a pale or overcooked crust, too finely or coarsely chopped up supplements, but they are not so fatal.

It turned out to be easy to test bread machines on the Russian market.

First of all, we wanted to find out: is it true they bake normal bread, does it burn, does it not remain raw inside? However, you must agree that the concept of normal bread is a very subjective thing, and what is good for one is bad for another. Therefore, we first decided to carefully review all the instructions and cooking books attached to the stoves.

It turned out that for each of the tested bread makers a recipe for this very ordinary bread for every day — wheat flour, yeast and water, a little salt and a little bit of sugar, without additives — was developed, and these recipes are identical.

Well, that is necessary for testing.

We carefully weighed the ingredients, laid them in the ovens in the order described in the instructions, installed the appropriate programs (the color of the crust was chosen as “medium”), pressed the “start” buttons and went to do our own business.

Breadmakers Vitesse, Tefal, Kenwood, Binatone, Panasonic and Daewoo Electronics baked bread in three hours, LG and Moulinex — in four (the difference in timing is not a virtue and not a disadvantage, it is technologically caused).

After the baked loaves were placed on the grates and cooled, it was the turn of the tasting. And she amazed us. None of the tested bread makers misfired.

There was no trace of flour on any of the bread samples. The crust turned out crisp, without any signs of «rubber».

The crumb was baked evenly, its density in different samples was slightly different, but in none did it go beyond the normal range. In short, everything is fine.

* Minimum prices in online stores at the moment