According to legend, the crescent-shaped bagel is in French croissant — Invented a French baker who allegedly saved Vienna from the invasion of the Turks in the 17th century. Not everyone remembers that victory, but the trampled symbol of the Ottoman Empire became for many the best start to the day. 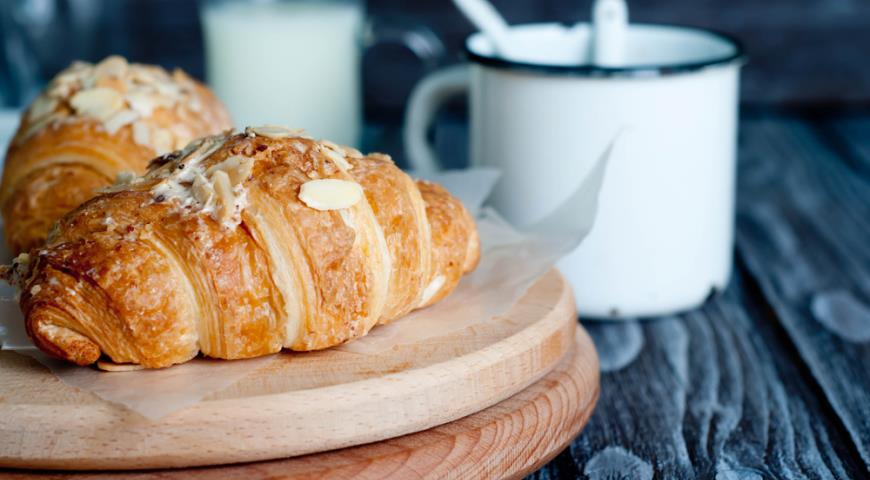 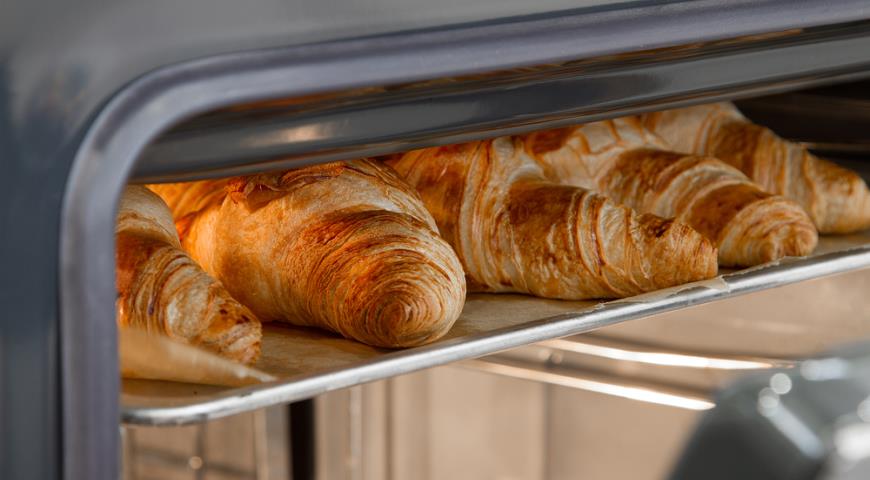 Any professional pastry chef will tell you what to make. croissants need skill and experience. Any tourist who had breakfast in a Parisian bistro will be categorical: the best croissants are born in France.

There, by the way, specially trained people are responsible for this baking, they prepare them only.

So, we will buy a very good unsalted butter (not less than 82% fat), high-grade wheat flour, milk with a fat content not lower than 3%, dry yeast and sugar.

And choose a day when we have a lot of free time.

So, 350 g of cold butter chopped, and it is better to stretch your hands and mix with 3 tbsp. l flour.

Mass well knead, so that it becomes homogeneous, without solid oil lumps. It is desirable that the oil while remaining cold, and not spread.

Put oil on cling film and form a rectangle.

Leave for 5-7 minutes. until complete dissolution of the yeast.

In a large bowl, mix 25 g of butter, chopped into pieces, 400 g of wheat flour and half a teaspoon of salt.

Stir and put the dough on the table.

The dough should be smooth and uniform.

Then the butter, which we will sandwich the dough, will not melt on it.

After the dough has cooled down, sprinkle it with flour and roll it into a rectangle 5–8 mm thick.

Up to this point, all recipes for cooking croissants by technology are very similar.

Only the volumes and weight of the original ingredients differ.

Further, the essence of the process is reduced to the fact that the oil is laid between the layers of dough and the resulting rectangle is rolled out with a rolling pin to the desired thickness (approximately 1 cm).

Thus, the oil is practically sealed in the flour billet. In cookbooks, this process is often called «seaming.»

In this case, you can fold the dough in different ways.

The easiest way is to initially divide the dough into three equal parts and “grease” them.

There should be a roll-in consisting of three layers of dough and two layers of butter.

The description of a more complicated variant reminds at the same time recommendations on origami addition and instructions for using household appliances.

Perhaps this is the very difficulty that the chefs warn us about. Let’s try to figure it out:

Such a large number of additions prevents leakage of butter during baking.

For a better layering of the product, you can sprinkle the butter slightly with sugar.

Sandwiching the dough is recommended at a temperature not higher than 18–20 ° C, so baking croissants is clearly not for stuffy summer evenings.

After the completion of this difficult procedure, the dough is either immediately put into the cold, or croissants are first molded and they are already sent to the refrigerator.

In smart books they write that the dough must be settled from 1 to 24 hours.

Leave the dough in the fridge overnight — you can’t go wrong.

One or two minutes before the end of baking, we recommend reducing the temperature by 20 ° C.

It remains only to get the lush, golden, crunchy croissants and make coffee.

— Croissants are a capricious thing, when preparing them you need to be able to “feel” the dough.

It should turn out crunchy with a delicate soft heart and a fragrant aroma.

It is by flavor that I, as a rule, determine how successful a croissant is.
The main mistakes in the preparation of croissants are: the fermentation process is too long, the dough is deformed at the time of rolling out, the dough is rising slowly and the oven is not sufficiently heated (less than 240 ° C) before baking.
I love the variety in the fillings, so, besides the classic croissants, I enjoy cooking them with chocolate, cheese, ham, salmon or almonds.

Each of the fillings requires a corresponding addition.

For example, croissants with salmon sprinkle with sesame on top, which gives them a special aroma and tenderness.

2018-11-26
admin
Предыдущий Guessing on playing cards: the layouts for money
Следующий Abu Dhabi Airport: how to get there, Tourist Information