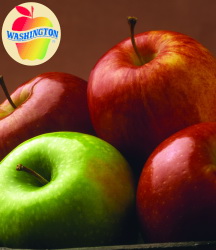 If the consumption rate in Western Europe is at least 21 kg of apples per person per year, then the average Russian eats no more than 8-9 kg.

As well as residents of the United States — about 9 kg of fresh apples.

British scientists from the city’s Food Research Institute Norwich (Institute of Food Research, Norwich) came to the conclusion that apples can prolong a person’s life by 17 years. Researchers found in apples polyphenol epicatechin — A complex element that improves blood circulation, the immune system and rejuvenates the heart.

And the risk of heart disease, heart attack or stroke reduces by 21%.

About how much you need to eat apples to noticeably younger, from the message of British scientists is unclear.

But all the same Britons for several centuries say "an apple a day keeps the doctor away", what loosely means — "Ia block a day — if you want to be healthy, an apple a day — forget about doctors".

And the global apple industry is trying very hard for us to be healthy. Since the 13th century BC Ramses II issued a decree on the cultivation of wildly growing apple trees in the Nile Delta, many centuries passed and selection work.

Washington State apples are sold not only in all 50 states of the USA, but also in more than 40 countries of the world. 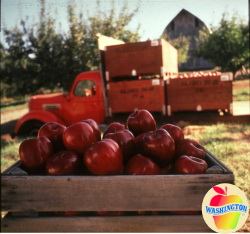 Washington apples lucky. Of these, for more than 200 years of their cultivation, they have made a cult. Washington State Fertile Grounds are at the foot of Cascade Mountains, at an altitude of 150 to 1000 meters above sea level.

Over 92,000 hectares of land has been developed for apple orchards.

These lands were first explored by the first settlers at the beginning of the 19th century, and by 1826 they began their active development, as it became clear that the generous, sparing sun and local soils rich in volcanic ash create excellent conditions for farming.

The arid climate of this region is also well suited for apple growing — there are fewer insects, the trees are less likely to get sick, and their fruits ripen better. The soil feeds on water from the numerous streams and fountains flowing down from the mountains. Since it was observed that apple trees grow stronger and healthier along the river bank, farmers soon began building artificial irrigation systems.

By 1889, the state had established the first commercial gardens.

Today, a medium-sized apple orchard occupies about 40 hectares, but there are also giant gardens with an area of ​​more than 12 square kilometers.

Details about growing conditions apples of washington state You can read on the website of the Washington Apple Commission in Russian — www.bestapples.ru.

At the end of the season in Washington State, 35 to 45 thousand hired apple pickers are busy harvesting apples.

With their hands, from 10 to 12 billion apples are manually harvested in Washington State each year.

The state grows apples of many varieties. The most popular are Golden and Red Delicious, Granny smith, Braburn, Jonagold, Fuji and Gala.

All nine basic varieties are brought to Russia, but red is most often found in our supermarkets. Red Delicious, yellow Golden Delicious and green Granny smith.

They have different taste, different density of pulp and, as a result, different culinary purposes.

2019-10-15
admin
Предыдущий Jurmala — what to see, what to try
Следующий Apple charlotte