Wasabi — This is a light green burning aromatic roots of the herb Eutrema wasabi (or Wasabia japonica) of the cruciferous (cabbage) family.

In Europe, wasabi is often called «Japanese horseradish«- that, in general, is true, because horseradish belongs to the same biological family. 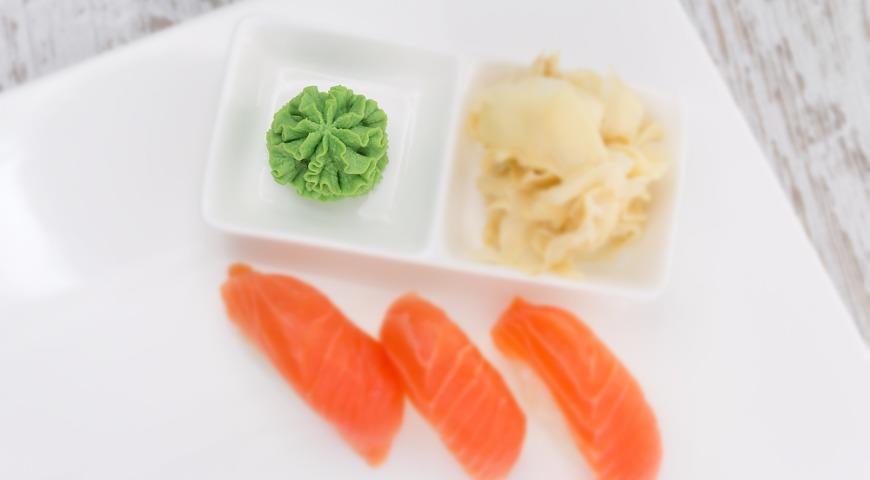 Wasabi are the light-green, burning, fragrant roots of the perennial herb Eutrema wasabi (or Wasabia japonica) of the cruciferous (cabbage) family. In Europe, wasabi is often called “Japanese horseradish” — which, in general, is true, because horseradish belongs to the same biological family.

Wasabi genus includes four species, but only one is cultivated — wasabi japanese.

Tastes are radically unevenly distributed: the upper part is much sharper than the lower.

Nevertheless, for commercial purposes, the roots are used entirely, preparing exactly the same as our horseradish, but only immediately before serving, and not for the future.

Today there are two main methods of growing wasabi — either in small beds of mountain streams, on stony beds washed by running water in a semi-submerged state, or on special gardens. However, the «water» plant is recognized as a higher quality, and accordingly, more expensive, as it has a brighter taste and aroma.

The main commercial plantations of the plant are in the Japanese province of Izu.

Wasabi is also cultivated in Taiwan, in the United States, China, Korea and New Zealand.

Wasabi was born in the Far East and Asia.

Wasabi was cultivated in Japan in the 10th century.

Wasabi was already known in 1396, when the inhabitants of the Shizuoka region from the island of Honshu presented roots as a gift to the future shogun — ruler. Since then wasabi
gradually began to spread to other regions of Japan.

It began to grow at home, simple Japanese planted wasabi in their garden.

And pretty soon the plant literally became a cult.

This cult reached the Western world only at the end of the twentieth century, when fusion cuisine came into fashion and everything Japanese became very popular among European and American chefs.

Fresh wasabi roots rub and use the resulting bright green paste as a hot seasoning. They can also be dried, and the dry root is not sharp at all (albeit bitter); a burning taste will appear if you soak wasabi for a few minutes in water. The soaked root is ground and a pale green powder is obtained, from which sauces are prepared for traditional Japanese dishes.sushi«,»sashimi«And»tempura«.

As a rule, Japanese cooks rub only the amount of wasabi needed at the moment, and wrap the remainder of the root in film and keep it in the refrigerator: for about a month it does not lose its taste and aroma.

Wasabi is a favorite seasoning in Japan.

To prepare it, wasabi root is rubbed on a grater — metal or ceramic, but the best varieties of wasabi are obtained if shark skin is used as a grater. The spicy green pasta obtained in this way is mixed with soy sauce and is necessarily served with sushi and sashimi, which is put into meat noodles,
add to sauce to tempura.

In 15–20 minutes after cooking, the sharpness of wasabi and the aroma is exhaled.

In addition to the root itself, stalks and wasabi flowers are also used in Japanese cuisine.

Of them, for example, preparing tempura.

Fresh leaves of the plant are edible and taste similar to the seasoning already prepared.

Beware, wasabi is sharper than many varieties of chili.

Although capsaicin (there is no substance making spicy pepper) and its sharpness is more akin to mustard, that is, “beats on the nose«And does not burn the tongue.

The sharpness of wasabi is easily washed off with water or other food, again, in contrast to the chilliness of chili.

If wasabi didn’t seem to you to be too sharp or cost too much at the store, then you were deceived and slipped into a fake. Honestly, you could never try real wasabi, if you have not been to Japan or to very expensive Japanese restaurants where the chef considers it a substitute to sell.

In 99% of cases outside of Japan, his brother’s hell falls on the table instead of real wasabi root.

All over the world, you often use wasabi paste in tubes, which is a mixture of wasabi (often powder) and regular horseradish — the ratio of these ingredients determines the quality and price (sometimes the proportions indicate on the label). Pure Wasabi — honwasabi («real wasabi«) — can be found only in Japan, and even there it is an expensive pleasure.

Produced and fake «wasabi powder»: Mustard powder, starch and artificial colors are added to dried and ground horseradish. Seasoning is convenient and cheap, but, alas, it does not go to any comparison with the present wasabi.

It is he who most often sold in our stores and served — alas! — in the network of Japanese restaurants in Moscow.