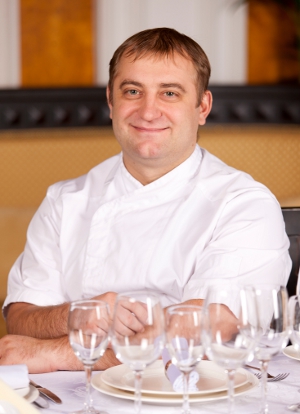 Well, why “bistro” is more or less clear, it is now in trend.

But regional French cuisine — how much is it possible at all, without French regional products?

Products can be brought in, so nothing is impossible. Moreover, some of the dishes that I have learned to cook in this course, I am going to include Alkov in the new menu. Which ones — while the secret, however, in the beginning of June there will be no secret, so it’s not long to wait.

And as for a bistro, you are not quite right — it just seems as if everyone knows everything about a bistro: such a “nedorestoran”, everything “quickly and quickly”, as the Cossacks in Paris said, simple food, simple service … I assure you, the bistro from Ducasse — it is something completely different, something much more than the ability to quickly eat something nourishing and uncomplicated. It is not without reason that very high-level professionals have gathered on this course — two chefs from Belgium, a teacher at a culinary school from California …

And what is a Duckass bistro?

Dukass bistro differs from a “real” restaurant not so much by food as by atmosphere: a slightly closer arrangement of tables, a slightly less pretentious audience — in France, when a person goes to a restaurant, he dresses accordingly, and bistro is simpler and a little cheaper. But the food, its quality, its taste and its appearance in a bistro are in no way inferior to a restaurant.

Food can be simple, but then it relies on a complex sauce, the creation of which requires a whole day, or even two. Yes, the dishes themselves at Ducasse often only seem simple — in fact, you have to take so much into account when preparing them!

It seems to be little things, and the little things are obvious, but for some reason no one except Ducass and his team thought about them.

In the photo: a soft-boiled egg on spinach with beef Juice

A dish that is cooked in a saucepan should always be covered with a lid, and when the lid is slightly opened, it is necessary to ensure that all evaporating moisture gets back into the saucepan. Nonsense? No — Ducass principle of operation.

Or another example — we were preparing in the classroom as if we all knew a famous dish — buds in brandy.

And at the stage of adding beef zhusa to it, the teacher advises us to pour some more cream. Trifle?

But the taste has changed, and changed for the better!
In addition, in the bistro “according to Ducasse” the food should not only be tasty, but also beautiful. Even if a simple potato is used as a side dish, it is cut in the form of different geometric shapes. Well, the possibilities to make a beautiful pasta are simply inexhaustible: so, from thick tubules like foam, if you cook them not as a paste, but as a risotto, then bake and cut in a special way, such masterpieces are made that even it is pitiful.

In short, the decoration of dishes on the courses was given no less attention than the actual cooking, and this is not at all about fine cuisine, but about “simple and satisfying” dishes for bistros.

And Dyukass himself appeared in his school?

No, now it rarely happens — he has too much to do. But when, seven years ago, I first got into this school, Ducasse sometimes taught some courses — however, it was twice as expensive as regular training. However, the case does not suffer from a lack of a chef: our current teacher, Christophe, once studied not only from Ducass, but also from Paul Bocuse, so that he is a real ace.

By the way, maybe soon he will come to us at Alkov, a week will work here … In addition, all the improvements, updates and other changes in the method of cooking do not pass by Ducass: he controls everything that happens under his name.

Can an ordinary person who likes to cook learn from Ducas school?

Theoretically yes, but why?

Still, such training is designed for professionals who know, if not all, then almost all of the things that relate to the basic part of our profession, and come here to learn the details — that is, in essence, the most important thing. But a student who will ask how to cook broth or something else like that will look weird, and what can he learn here?

But the professional here is always waiting for the opening.

In the photo: tomato soup with crayfish and mozzarella

What have you discovered this time?

I first cleaned a soft-boiled egg from the shell.

Think it’s easy? And you try it! He can’t be crushed!

This is also an art — in cold water, gently, remove the shell with a spoon and send an intact egg to the place put in the dish.

How many «students» did Ducasse have this time?

We, the students, were seven — we cooked under the guidance of Christophe, and decorated our dishes at our own discretion. Well, and then they themselves ate it all … Courses are short — “Regional cuisine” was designed for two days. «Bistro» — for three: and for the most time students-chefs cannot leave their kitchens unattended. Every day we spent at the stove for eight to nine hours — no theory, no desks, only practice.

The kitchens at Ducass school are perfectly equipped, there is everything in general — the commitment to traditional cuisine does not prevent him from using all the technical improvements.

What language is the language of instruction?

In French, of course.

Maybe I know this language and not perfectly, and I can hardly (and definitely don’t want to keep up light talk about politics), but I understand everything that relates to my profession, so in this sense I have no difficulties It was.

Can all of what you have learned be transferred to Russian soil?

Something will have to adapt. For example, I know that in our menus it is meaningless to start a scargo (they are an exquisite French dish of snails — approx. Ed.) — they are practically not ordered from us. Or when preparing for a large reception, meat should be cooked a little longer than is customary in France — many of us do not like meat with blood.

Also, do not decorate the dish with raw champignons — in France they are eaten, and in our country raw mushrooms are treated with some prejudice.

Well, for the rest, there should be no problems — after all, our people have already managed to travel around the world, now their gastronomic views have become much broader than twenty years ago.

In the photo: Tempura mussels with new radish variety

Are our products also not a problem?

The problem is that we have few good products.

But Ducasse adheres to «green production» — he considers it appropriate to use mainly local products, and with quite specific origins.

So, if he cooks a lobster, then from Brittany only, and so on.

Yes, ducks, piglets, sturgeon, greens, something else we can take and Russian.

But, let’s say, we cannot get marble meat — I know, there were attempts to raise the right cows, but for some reason it didn’t come out quite what was needed.

Do you still go to Dyukassu?

I love to study. I used to go to France just to work — who I just wasn’t in their kitchens, is not necessarily a cook. And from each such practice I have left an invaluable experience, without which a good chef is nowhere.

Do you know what’s interesting?

Here, for example, I give my cooks a recipe: everything is detailed, everything is painted to the smallest detail, like follow the instructions — and you get a reference dish.

It turns out, maybe it’s tasty, but not that … And why? Yes, because this cook has never before tried this dish in the right way. So any cook, and not only the chef, should certainly go everywhere and try everything, otherwise he will fail.

In addition, there is something new in the school of D.Kass every time.

So, this year we were surprised by white carrots, lemon, similar to octopus tentacles (it is intended for peel) and sweet green radish in the form of an elongated pear.

So this training is delaying — this is my personal drug, which I am not going to refuse.