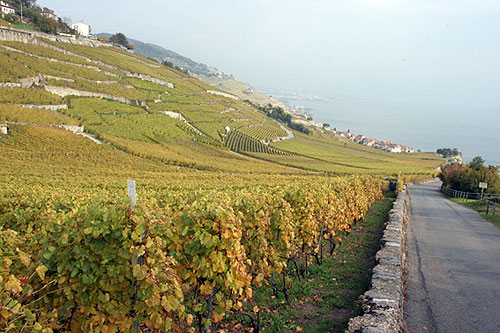 The most common division of Swiss gastronomy is based on an imaginary Roesti graben, “Potato ditch” that divides the country into potato lovers (that is, residents of the German part of Switzerland) and all the rest.

The point here, of course, is not so much in potatoes, as in the cultural influence of neighboring nations.

So, the Germans added to the kitchen of the inhabitants of northern Switzerland, solid dishes with meat, mushrooms, cabbage. Neighbors-Italians instilled a love for polenta, pasta and risotto from the south of the country.

The French have enriched the cuisine of Lake Geneva region with sauces and light fish dishes.

Every region of this small country, even every village, is proud of original dishes and ancient recipes, the history of which is often fanned by legends. 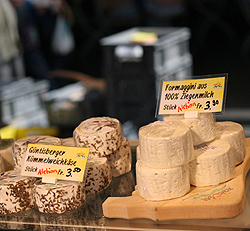 The Swiss prepare, as a rule, from regional products, even in spite of the fact that one has to overpay for such addiction. Instead of parmesan, for example, they are more willing to buy sbrinz (Sbrinz) — very hard cheese with a «flower», slightly salty taste.

In any rural and urban market, first of all, farm specialty products are sold and only then that imported from neighboring countries — France, Italy, Austria, Germany, Spain.

The Swiss meal is accompanied by local wine.

Here the locals also show patriotism, preferring the wines of their region. Almost every canton is proud of its vineyards. Traditionally they are considered the best accompaniment to local dishes.

Unfortunately, Swiss wine is practically unknown to the world, since it is almost completely drunk by the Swiss themselves.

Soup in Switzerland is a must-have.

In the old days a peasant or a shepherd could have had the only hot meal of the day!

Swiss soups are simple and fundamental: for a long time those products that were at hand were used. So, in the canton of Ticino in the soup minestrone there were tomatoes, rice, beans and grated hard cheese (of course, sbrinz!), and bussek — giblets, potatoes, peas and cheese again. In Graubünden, soups were prepared with barley grits, and in the northern and northwestern regions of the country — with vegetables and wild mushrooms.

And in Vala, they eat an unusual and, at the same time, simple wine soup: to cook it, you need white wine (Fendant), water, cream and some spices.

Just a little dish gzotus (Gsottus), appeared in the Goms region of the canton of Valais (to this day it is served only here).

In the winter months, local residents used to extinguish smoked ham, lard, beef and lamb (usually remnants from previous dinners) in the clay pot, abundantly alternating them with pears and onions. 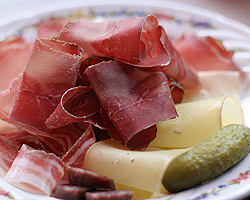 Another traditional dinner dish, originally also a shepherd’s, is a cheese and meat plate.

Here are several types of delicious dried meat, and lard, cut into transparent slices, and local cheeses, and dry sausage, pickled cucumbers and onions — in a word, everything that the hostess has prepared.

Therefore, the principle of compiling the Valesean plate is one, but there are probably as many options and tastes as there are families in the canton of Valais.

Equally variable is another popular Swiss dish. roshty (Roesti), which were traditionally served for breakfast.

The basis of ryosti is boiled potatoes, which are then peeled, torn on a coarse grater and fried in the form of a large flat bread on both sides until golden brown. This is, so to speak, the main recipe. Next comes the fantasy, personal preferences and, last but not least, the range of products.

In Basel, for example, rosties are cooked with a lot of onions, in Ticino — with bacon and rosemary, in Appenzel — with pasta “horns”, bacon and local spiced cheese Appenzeler, in Western Switzerland — with bacon, tomatoes, paprika and cheese popular in the whole country gruyere… Recipes do not count.

It is said that, in the old days, Swiss men defined the culinary abilities of their future wives by the way they cooked roshes. 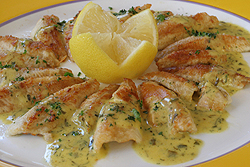 In the area of ​​Lake Geneva, Swiss cuisine is lighter and more varied.

Here, large quantities of lake fish are eaten, and salads, filled with vegetable oil and vinegar, replace the soups.

The visiting card of the Lake Geneva region was perch fillet (Filets de perches): halves of perch are lightly fried in butter and served most often in lemon cream sauce with potatoes.

The climate of the Swiss valleys (first of all, the valleys of the Rhone) is favorable climate for fruit trees: apricots, pears, plums, apple trees, cherries. Fruits and berries in combination with the famous Swiss chocolate and excellent fresh cream are the basis of Swiss confectionery art. Fruit pies (seasonally), carrot cake, chocolate cake or mousse are all flavored with a fair amount of rich cream (the Swiss call them “double cream”).

Some holidays, such as St. Nicholas Day, are baked fruit bread (Glarner Fruchtebrot), as a filling for which are used dried apples, pears, plums, raisins, nuts and a fair amount of strong cherry tincture.

In Ticino, the most popular bread cake (Torta di Panne).

Eating meringues all over Switzerland merengue, invented, it is believed, in the town of Meiringen (near him, according to Conan Doyle, the battle of Sherlock Holmes and Professor Moriarty took place — but this is, by the way).

The appearance of this dish, which has become the hallmark of Swiss cuisine, we owe to the winter and peasant savvy. By the end of the harsh Swiss winter, cutting off mountain villages from the outside world, quite a lot of dried cheese remained in the bins, which could only be eaten in melted form. But the zealous Swiss hostess will never lose the old cheese.

The remnants of yesterday’s dinner — boiled potatoes, pieces of bread, will not disappear either.

So the Swiss began to pass the long evenings, dipping pieces of bread and potatoes into a hot mixture of two or three varieties of cheese (in most cases, this is a gruyere from a mountainous region in the southern part of the canton of Friborg plus local cheese), white wine (chassla, it is fendan, or Johannisberg) and spices.

Currently, almost every region of Switzerland offers its own original fondue recipe. In addition to cheese fondue, you will meet Burgundy Fondue (Fondue bourguinonne): instead of the cheese mixture, boiling oil is used in it, and instead of bread — slices of beef, which are also served with assorted sauces, pickled cucumbers and onions. Try the so-called Chinese fondue (Fondue chinoise): thin slices of beef, pork, horse meat or fish dipped in boiling broth and eaten with sauce and vegetables.

The first extant fondue recipe was written in German in 1699 — it was called “How to cook cheese in wine”. However, long before that, the Swiss knew the dish raclette (Raclette). It is believed that the name comes from the French racler — scrape.

The bottom line is this: a large head of cheese (most often using an aromatic low-melting raclette) is melted over an open fire, then the melted cheese is peeled off the surface of the head onto a plate.

They are served, like fondue, with boiled potatoes, as well as pickled gherkins and pearl onions — they are eaten on a bitten off.

Want to know more about Switzerland?

Where to try dishes of national cuisine or join the high gastronomy? What to bring from Switzerland? What places are best for walking in the mountains and recreation with children?

What are the wellness programs in the spa of Switzerland?
Read all about this and many other things in the author’s guide. Switzerland in summer series Eyes of the witness.

2019-10-03
admin
Предыдущий Switzerland: where to go and what to try
Следующий Swiss bagels