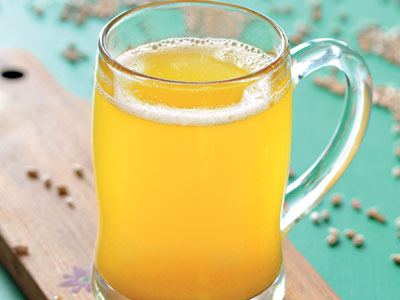 But because initially sour soup called malt-honey drink, to taste and recipe close to kvass, but with a more pronounced taste.

Dal in the «Explanatory Dictionary of the Living Great Russian Language» and writes: «Sour shchi«- kind of bubbly kvass».

This drink is over 500 years old: already in Domostroi, which appeared in the 16th century, leadership in various areas of family life and households sour soup mentioned several times.

Drinking them was also accepted as sparkling wine, from glass glasses or glasses.

But there were options; so, in the “Big Moscow” tavern, popular in the 1840s — 1870s, near the Okhotny Ryad (where the Hotel “Moscow” is now) sour cabbage and kvass were served in “charms” of silver with gilding.

“5 pounds of malt (wheat or rye, it doesn’t matter), 5 pounds of wheat flour and 3 pounds of buckwheat flour sift into a sieve, pour it into the tub and boil water to make bread dough.

Then leave him alone. After two and a half hours — three, scald this dough again with boiling water and, stirring thoroughly, let stand, then pour the liquid into another tub and, when it cools, add 5 pounds of honey or molasses, stir, pour a cup of yeast and a half and let ferment until the foam appears, upon reaching what is bottled and place those for half a day in a warm place unopened.

And then plug up and set for four days on the glacier, after which they should be considered ready. ”

We recounted this recipe for modern measures and in accordance with modern conditions: 10 liters is just what we need.

You will also need:

Sift the malt and both types of flour through a sieve into a 2 liter container. Mix. Continuously stirring, pour a thin stream of boiling water so that the mixture acquired the consistency of thick dough, as for bread.

Cover the container with a dry towel and place in a warm place without drafts for 2.5-3 hours (for example, put in a warm, not higher than 50 ° C, oven).

Transfer the ripe dough into a 10-liter container, pour boiling water to the brim, mix until completely homogeneous and set aside.

When the mixture has settled and cooled down, pour it into a clean container of the same size, trying to avoid the ingress of sediment into it as much as possible.

Dissolve the yeast with warm water until the consistency of liquid sour cream and leave until the bubbles begin to appear on the surface.

Then pour the yeast mixture with honey into a container with a malt solution.

Mix thoroughly and put in heat until fermented — evidence of this will be the appearance of abundant foam on the surface.

Then pour the liquid into bottles and place it, without closing, in a warm place for 12 hours. The bottles should be filled approximately by two thirds, otherwise the gas that is formed during fermentation will knock out the cork or break the bottle.

Corked bottles put in the refrigerator, or in another place, the temperature of which will not exceed 4 ° C.

After 4 days, sour soup ready for use.

Malt is a specially bred grain, barley or rye, germinated in moisture and heat, dried, and then coarsely ground. Kvass and beer are brewed from malt.

There was a proverb: “Do not learn to make beer, but learn to grow malt”.

Rye malt today is not so difficult to find.