Sherry: fermentation and classification, solera and kriaderas, types of sherry

Sherry: fermentation and classification, solera and kriaderas, types of sherry

The legendary sherry (in English — sherry) is produced in the very south of Spain, in Andalusia, on the territory of the so-called sherry triangle, which is located around the cities of Jerez de la Frontera, Sanlucar de Barrameda and Puerto de Santa Maria.

Sherry can be different: in color — from greenish-straw to dark-amber, to taste — from dry to cloyingly sweet.

It is produced from local grape varieties — Palomino Fino, Pedro Ximenez and Moskatel (Muscovite of Alexandria), with 90% of the vineyards planted with palomino (because dry sherries — and most of them — come from this variety).

Grapes are used both in mixture and in solo; For some types of sherry (mostly sweet), fresh berries are kept in the sun, for others — they are sent under a press.

The production technology is tested by centuries of practice. From the manufacturers required only time, honesty and accuracy. The grapes are harvested, squeezed.

Juice, as usual, is left alone for some time — for fermentation.

Then the first classification of sherry is carried out: wine experts take samples from each batch and decide which part of the young wine is suitable for Fino and Manzanilla style sherry, and which is suitable for the Oloros style.

Based on the results of the classification of wine is attached — add to it alcohol, the amount of which is calculated depending on the style.

In the production of several styles of sherry (Fino, Manzanilla, Amontillado) further exposure is made with the addition of a unique fungus (sherry yeast), which exists only in this region.

Tourists visiting Spanish wineries are sure to be shown special demonstration barrels with lighting and a transparent front wall: at the bottom is sherry, at the top is air, and between them is a fungus.

After some time, the fungus dies off and falls to the bottom.

During his “work,” he acquired special sherry notes in which the aromas of almonds and dried porcini mushrooms are guessed.

And then the technology «Solera and kriaderas» comes into play (solera y criaderas). Its essence is as follows.

Barrels stack not anyhow, but in even rows. The upper and all middle rows are called “cryaderas”, the lowest one is called “solera”. In the barrels of the top criadera is the youngest sherry.

The closer to the bottom, the more sustained the contents of the barrels. 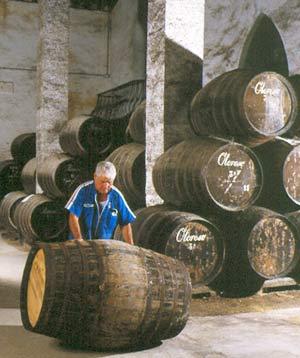 From time to time, a special person approaches the pyramid and pours a portion of the sherry from the barrels of the lower cryadera into the barrels of solera (the contents of which, ready-made sherry, are preliminarily taken and bottled).

And in the barrels of the lower kriadera — that sherry, which was even higher (and so — up to the upper tier, into which new wine is poured without aging). And all the mechanics.

The main thing to remember from which barrel into which you poured what.

The premises where sherry is cured (according to the old memory they are called “bodegas”, that is, cellars) have dimensions comparable to a stadium.

So, having spent forty minutes in the bodega, you can feel unimportant to be used to it.

The minimum aging time of sherry is 3 years. But in practice, this period can be calculated in dozens of years — up to 20 and even 30.

Of course, the three-year-old wine is quite suitable for consumption, but a twenty-year-old sherry is just a masterpiece.

In addition, the wines in Solera are mixed since its inception. Some salt birds, of which one manufacturer may have several, are now 100-150 years old, and, accordingly, each bottle contains a mixture of 100-150 harvests.

Sherry from old solers with a long exposure are valued especially highly.

The vintners from the city of Jerez do not know what the crisis of overproduction is. But, nevertheless, they constantly carry out curious PR actions.

The most common among them is the tab of the name blend. Along with barrels named after the Spanish kings, queens, princes and princesses, Picasso and Steven Spielberg sherry ripen in bodegas.

The latter is very pleased with American tourists who vied with each other are taking pictures of each other against the background of a sacred autograph.

In Jerez and its surroundings, the attitude of people to wine is about the same as in Russia for kvass.

Okroshka, of course, is not made from it, but a glass of fino is often added to a bowl of soup, pedro ximenez is poured over an almond cake, and sauces are prepared on the basis of oloroso and ammonlylado.

There are many types of sherry, and each manufacturer introduces its own types and blends. However, the Regulatory Council for Wines and Brandy Jerez adheres to the following classification:

Fino — transparent, very light dry wine with an alcohol content of 15-18%. The most commercially successful sherry.

If you buy a bottle of sherry brand «Tio Pepe», then this is just the fino is.

Manzanilla — dry, color is a bit lighter than fino.

More rare in comparison with fino. This is explained by the fact that a special type of fungus, its southern species, is used for fermentation.

It seems that this fungus can exist only in the city of Sanlucar de Barrameda and its suburbs, since it is only there that manzanilla is produced.

Amontillado Palomino is made from grapes, sometimes with the addition of Pedro Ximenez, and at first it is kept under a fungal film, and then in contact with air. The color of wine is amber, the taste is dry with a slight sweet taste.

Oloroso — dark-golden wine with a rich bouquet and, despite the absence of the notorious fungus, with an alcohol content of 17-22%.

Pedro jimenez — the sweetest sherry. The taste is perfect raisins. Because for him the grapes are dried in the sun.

Despite all its sweetness, the wine is perfectly balanced.

Palo Cortado — has a light mahogany color, dry taste and contains from 17 to 22% alcohol.

In taste, it combines the tenderness and sharpness of Amontellyado and roundness of oloroso.

Cream — sweet sherry of mahogany color. This is, in fact, what sherry oloroso becomes with long exposure.

As the name implies, its taste is velvety.

Pale Crim straw color. The bouquet is very delicate, and the wine is also delicate. Sweet, but not at all cloying.

It is made from the same palomino as dry sherry. The sweetness is achieved by mixing fino and wine made from a slightly pursed palomino.

Medium — this is also a blend. Sherry Amontillado and Pedro Jimenez are mixed.

Its color is from amber to mahogany, the taste is sweet, the alcohol content is 15–22%.

2019-09-16
admin
Предыдущий The mantra of fulfillment of desires is a very powerful mantra.
Следующий Sly people — a new cafe in Moscow