Главная » Cooking » Sergei Protopopov: The main thing is not to overeat

Sergei Protopopov: The main thing is not to overeat

Sergei Ivanovich Protopopov was born during the imperialist war and lived to see the war in Ukraine. Out of one hundred years of his life, he was the main culinary specialist of Moscow, and now he spends a minimum of time in the kitchen. Every evening, before going to bed, he walks for an hour, in the summer he grows flowers in the country and regrets that there is not enough time for everything. 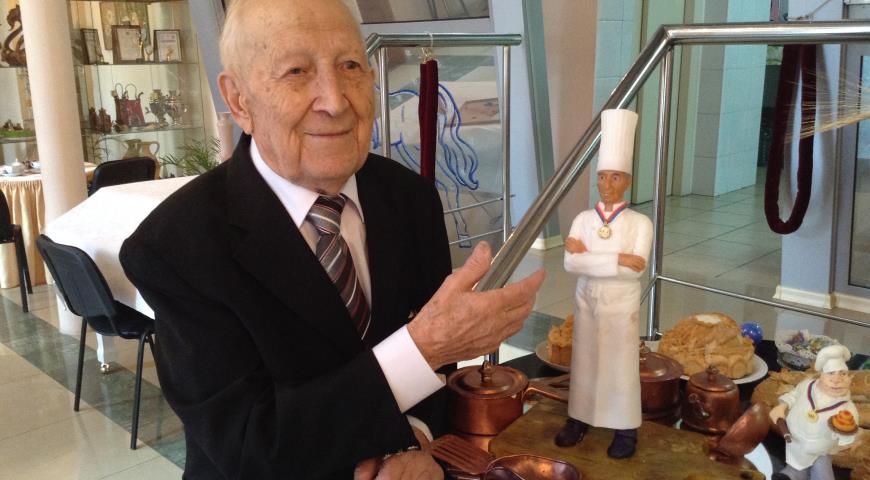 Sergei Ivanovich, what are your eating habits right now — what do you eat?

I completely refused strong meat broths and fried foods. I do not eat beef at all, I prefer fish.

And cottage cheese, a lot of cottage cheese! I often cook buckwheat for myself, sometimes in half with rice, I like this combination. Most importantly — do not overeat at night.

I have dinner at six in the evening, and before bedtime — a glass of yogurt.

I drink tea and coffee without sugar.

And with salt, I am also very careful.

Can you afford alcohol?

In my youth I actively drank and smoked a lot. And at forty-something, he thundered into the Botkin hospital — a heart attack!

There, a professor talked to me so seriously that after that I quit drinking and smoking and cut them off.

Now I drink about a bottle of brandy for the year — 10-15 grams on holidays.

What do you think, what is the secret of your cheerfulness — lifestyle or genetics?

I think both. Of course, the fact that I quit drinking and smoking helped me a lot.

Besides, I walk every evening for fifty minutes. And if I go to the store on the way, it turns out an hour.

These walks strengthen me a lot.

Where are you from, who were your parents?

From the town of Odoev, Tula Province. The district city, five churches, four Bolsheviks blew up.

My family had several water mills. In the 1920s, parents were dispossessed; father died in 1926; mother was left with three children.

In 1929, we were thrown out of the house, one of the citizens, and we were well known and respected in Odojev, offered the mother a room, free of charge.

We all lived in it.

What did your family cook in good times?

There were no pickles.

We were considered rich people, we helped many people, but we ourselves lived modestly — I remember that we often cooked soup and potato soup.

How did you get to Moscow?

She took me and. I remember when we were traveling in a cab from the Kursk railway station to Malaya Bronnaya, to my sister, I saw boys in cook uniform on Bronnaya, and said: “Manechka, I wish I could be a cook, I would have eaten my fill”. I was fourteen then.

But in the culinary college they took only fifteen. My sister set me up at the Tea Room — she was in that house near the Yaroslavsky railway station, where the Moskovsky department store is now — but without official registration. I worked there for four months, for free.

I remember that the chef there was Aunt Natasha, a wonderful person, she gave me a chop, a bagel, and sometimes three pennies — so that I could get to the house by tram rather than on foot.

When you were fifteen years old, where did you go to study?

To the School of factory apprenticeship culinary production. The building has two floors — the bottom is brick, the top is wooden.

And there were two groups of students — only fifty people, only boys. The school produced chefs and confectioners of the sixth category.

Upon completion of training, only five students, including myself, were awarded the seventh grade, the highest.

And where did you go with this rank?

In the restaurant number 21, on Sretenka. At first it was a dining room, then a cafe, then upgraded to a restaurant.

There was a hard-drinking chef, and at some point the head of the canteen dismissed him.

She came to me and said: «Sergei, you will be the main thing.»

I was confused, because I didn’t have any experience, but she insisted — that was how my career began.

What was fed in the canteens in the 30s?

Soups, borscht, cabbage soup, chops, pancakes, pasta … In the early thirties in the catering prepared on wooden plates. And there were no refrigerators — in the yards of canteens and restaurants, in winter, ice slides were poured, covered with fir-wood, tarpaulin.

This ice was later used in the summer.

I was non-partisan, flatly refused to join.

Even at the plant’s power plant 45 on Prospect Budenngo, where the technical director was dismissed and I was appointed to his position, I categorically refused to join the party.

Where was the most interesting for you to work?

In the dietary canteen for honored Bolsheviks, she was on Myasnitskaya Street, in the House of Engineers. I was appointed there after the war.

By the way, in my entire working life I only quit on my own free will, all other transitions were translations.

So, when I worked in the canteen for the honored Bolsheviks, I read a lot of books on dietary food in order to make the right menus. Dietitian Sofya Lvovna worked with me together in the canteen, she taught me the mind to reason, because diet did not teach diet at the school.

The old Bolsheviks respected me very much. When they learned that they wanted to translate me as the main cook of Moscow, then five old Bolsheviks went to the reception to Mikoyan — to ask me to be left in their dining room.

But Mikoyan refused them.

For what merits did Mikoyan choose you as the main culinary specialist of the city?

I was invited to the All-Union Conference of Catering Workers in the Kremlin. There the cooks staged a luxurious exhibition of dishes: sturgeon, piglets.

Anastas Mikoyan, a member of the Political Bureau of the Central Committee of the Party, saw, among this luxury, my “Dietstol No. 5” for old Bolsheviks — wiped soups, carrot cutlets, beef soufflé, and yogurt, which we made ourselves. I tried.

And he appointed me chief cook.

And this despite the fact that I was non-partisan, I categorically refused to join the party.

By the standards of that time, was the main culinary specialist of Moscow a rich man?

Of course, it did not suit me.

Then through the Moscow Council I was assigned a personal salary of 200 rubles.

How many years have you been the main culinary specialist of Moscow?

What did you manage to do in this position?

I remember how I spoke at the All-Union Conference on Catering.

I was elected a member of the presidium, ordered to make a report. At that time, all reports were written in advance and must be certified in the ministry.

I went to the podium, took out a piece of paper with an approved text, began to read … And here the first secretary of the CIM Grishin said: «Sergei Ivanovich, put your paper aside and say everything as it is.»

And then I started talking about the fact that catering establishments need to be supplied with meat not in carcasses, as in stores, but already dressed — the flesh is separate, the bones are separate.

He also talked about the need to create in all districts of Moscow accessible dietary canteens.

And what was the effect of your performance?

I don’t know if my performance influenced me, but after a few months all catering establishments began to get boneless meat and strictly according to varieties.

And then in Moscow in all areas and enterprises began to organize diet canteens.

You lived in very difficult years, have you ever been scared?

I will tell about one. It was in the restaurant number 21 on Sretenka. Previously, buffets in restaurants and canteens were directly on the trading floor, and the chef exhibited cold dishes in the showcase.

I got the idea to make Lenin’s mausoleum of butter and put it in the buffet. I bought a wooden model of the mausoleum, took a box of oil — 24 kg 500 g, cut out a mausoleum from it. The inscriptions «Lenin» and «Stalin» laid out carrots.

And then the NKVDeshniki, high ranks, somehow came to us, one of them was a general, judging by the epaulets. They saw the mausoleum and demanded to call the director.

But the director went to the bath — in those years there was such a fashion: to go to the bath in the afternoon.

They say to the waiter: «Call the chef.» I put on a chef’s hat and went out into the hall.

They did not believe that I was a chef — after all, I was only eighteen years old then. They point at the shop window and say: “What is it, do you understand what you are doing?” And only then I realized that there are bottles of Spotychk, Port Three Seven and some kind of liqueur in the window.

We can say that I got off easily — NKVDeshniki just asked to remove the bottle.

For two weeks I kept the mausoleum on the ice, I was afraid to fry meatballs on it. But then he fired …

What did your wife do?

She was an accountant. In my youth I was seriously caring for two girls. But they were not to my liking.

On one, her parents even put us to bed in one bed, but I didn’t mur-mur, cut off a blanket and slept until morning.

Another was convicted of drug trafficking. But the latter worked as a senior accountant in the restaurant where I was a chef.

We have lived with Lydia Mikhailov for fifty years, and have never said a harsh word to each other.

What do you most dislike about life today?

The lack of control is sad. Nobody observes technology in modern restaurant business.

Several years ago I was invited to dinner at the restaurant «Prague» — once it was the best restaurant in Moscow.

I ordered a soup solyanka, and in it, I see, the carnation is floating, why?

What books are you reading now?

I would love to read, but my eyes do not allow.

For five to seven years I have not been able to read books, and for newspapers I can only see headlines. And I hear badly.

But I have a garden!

A garden plot, eight acres, along the Gorky road, beyond Kupavnaya, I received it in 1957.

At first I grew potatoes, carrots, cabbage, and my sister advised me to grow flowers — potatoes grew for everyone at that time, and there were almost no beautiful flowers. Sister brought with VDNH peonies, phloxes, perennials.

And I got so carried away by them that now I’m doing flowers only at the country house.

I only have thirty tulip varieties!