Who makes up the menu school breakfasts and lunches, Where do they prepare them and what do nutritionists think about this?

At the beginning of the new school year Gastronom.ru at the request of many parents, he looked into the «kitchen» of one of the Moscow school feeding factories. 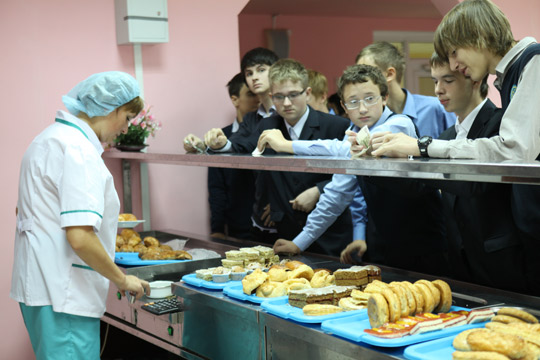 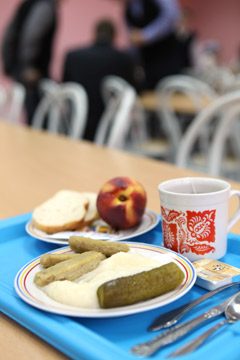 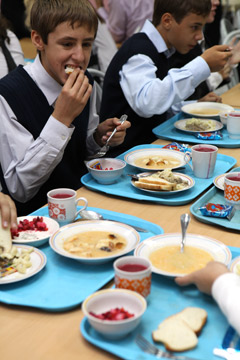 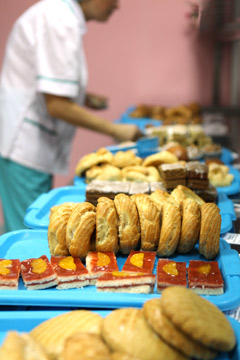 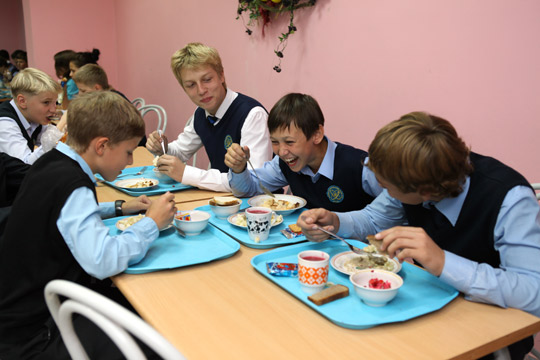 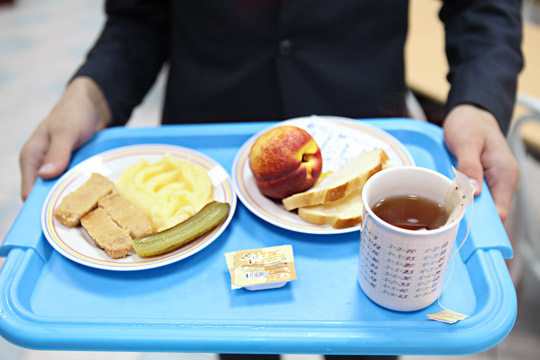 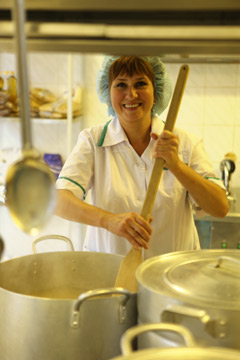 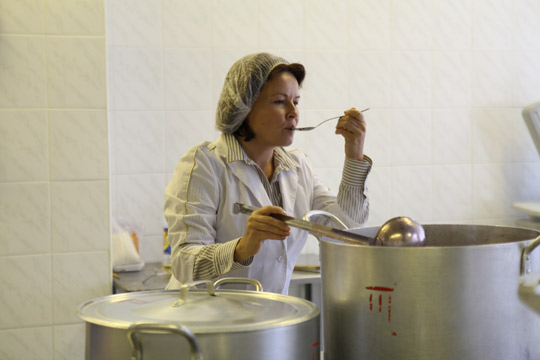 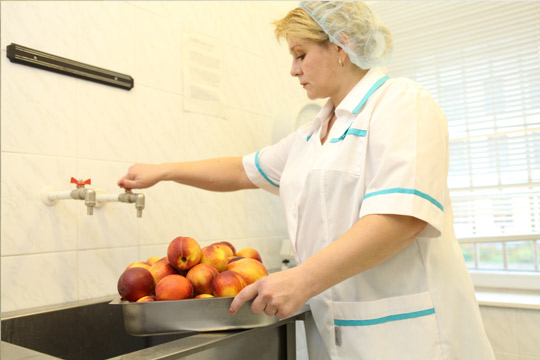 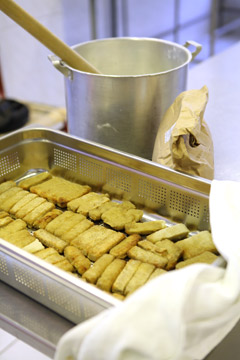 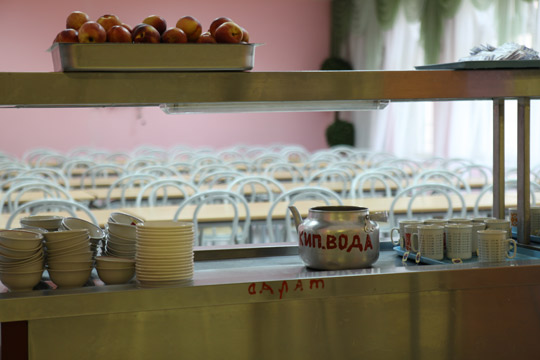 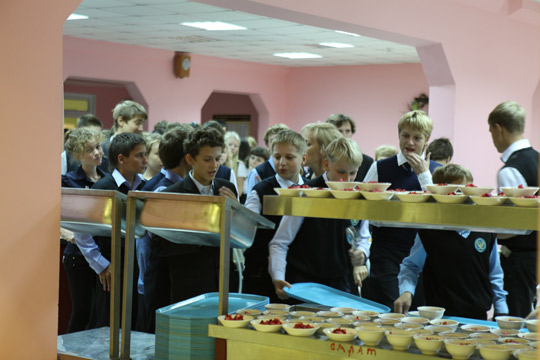 As told Gastronom.ru Specialist of the Department of Baby Food, Research Institute of Nutrition, RAMS Margarita Korosteleva, “According to research conducted at the Research Institute of Nutrition of the Russian Academy of Medical Sciences, 70% of Russian children showed a lack of vitamin C, 40% were deficient in vitamins A, B1, B2, carotene, iron, calcium, and 80% lack iodine.”

Does this deficit compensate school meals?

«School meals, which we offer, in fact, is a diet table number 15 «, — says the chief technologist of the SUE of the Integrated Plant school food NEAD Tatyana Anufrieva.

This “table №15” is a full-fledged vitamin nutrition regime for convalescents without special restrictions, except that minus the hard-to-digest heavy animal fats and spicy foods.

Nevertheless, frozen fish sticks with a shelf life of up to 3 months, wieners, half-smoked sausage, pickled cucumbers still appear in school canteens. Contrary to the rules? It turns out, no, according to the rules. «Sausages are allowed, but in a limited form,» explains Margarita Korosteleva. — According to the norms developed at our institute and approved by the requirements of SanPiNs, the student’s breakfast should consist of a starter, a hot dish and a hot drink.

Only stewing, boiling and steaming is allowed. The amount of sugar in sugary drinks is reduced to 7-12 g (including tea, compotes, jelly). And a minimum of salt is controlled.

Not that in school canteens from children hide salt shakers, which previously stood on the tables in the public domain — there is simply no excess salt. “Salt is discharged for one day at the prescription rate: for example, 100 g are put, and they will receive their school,” explains Tatyana Anufrieva.

However, schoolchildren who love salty are offered salted cucumber.

We make all the pastries ourselves — we have a powerful pastry shop. Only imported fruit: bananas, oranges, tangerines, nectarines, kiwi.

And Moldovan apples can also be called foreign. ”

Sausages are also domestic — as they say at the plant, these are limited batches that are made to order. school food.

They do not have soy, spices, preservatives and dyes, as well as reduced amount of salt.

We asked to comment on the 4-week menu for secondary schools, developed in accordance with the requirements of SANPINS and the recommendations of the Research Institute of Nutrition of the Russian Academy of Medical Sciences, a nutritionist Ekaterina Belova, Head of the Center for Personal Dietetics «Nutrition Palette»:
“This menu, at first glance, meets the standards.

But the information that is presented here is not enough to say with confidence that the diet is suitable for the child’s body.
However, in this menu I have a lot of questions not only to a large amount of sugar in dishes, but also to the fact that very often used semi-finished products (meatballs, sausages, dumplings, pizza, etc.), concentrates (jelly, instant cocoa, etc.) , as well as industrial products (flakes, cereals, juices, cookies, etc.). For the most part, all these products contain some amount of chemistry (preservatives, dyes, flavors).

And no matter how the manufacturers refer to the safety of a chemical component, doctors almost unanimously agree that children should be protected as much as possible from these substances. By the way, the growth of allergic reactions in children is often associated with excessive consumption of these substances.

And therefore it is especially strange when in state institutions under the slogan “Healthy nutrition” dishes and products containing preservatives, dyes, etc. are offered.
Pleases in this menu, the presence of bread, enriched with vitamins and minerals, however, without having detailed information on the composition it is difficult to judge how the name corresponds to the composition.
In this menu there are also, in my opinion, few fruits and dairy products. ”

How is food delivered from the mill to the school desk?

In those schools where there is a “canteen-dressing” kitchen, practically everything planned on the menu is prepared in the kitchen.

In those schools where there are only “cupboards-distributing”, schoolchildren receive food brought to the thermal port from the combine. “Machines delivering thermoses with breakfast to schools every day — nothing is brought for the future, because the sale time of ready meals is, according to the norms, 2-3 hours,” explains Tatyana Anufrieva.

This academic year Moscow An experiment has begun on the introduction of the so-called airborne school food in 270 schools in the Northern and South-Eastern districts.

Among parents, this food has already received the apt name «Whiskas for schoolchildren»: food is prepared, then packaged, cooled without using freezing technologies, sterilization and pasteurization and stored in sealed packaging (up to 20 days), and warmed up before use in school.

How the manufacturers themselves assure — Petersburg company Concord — the production does not use preservatives, flavor enhancers and other components that are not allowed in baby food.

AT Moscow the first and so far the only plant for the production of in-flight catering for schoolchildren opened in Podolsky area.

The experiment touched only a number of educational institutions — 270 schools of the Northern and North-Eastern districts participate in it. Moscow, but it is expected that with a favorable outcome, it will spread to almost all Moscow schools.

The menu of school meals at the Concord combine is commented by a nutritionist Ekaterina Belova:
“This menu, at first glance, also meets the necessary standards.

However, as in the previous menu, the frequent use of sugar in dishes is striking: it turns out that we sit down children from kindergarten and early school age for sweet dishes and foods. Even if parents limit sugar at home, the child will receive a fairly decent dose at school. After all, the dishes are already ready and the child has no choice — to add sugar or not.

In addition, sugar as a taste improver or even a substitute for taste, is often an excellent curtain for low-quality products.

Also, in my opinion, not enough in the diet of fruits and dairy products, which could be a great snack for a child.

In general, the diet is somewhat monotonous and “boring”.

In addition, heated food is less appetizing than freshly prepared.

In this regard, I can assume that children do not eat even half of the dishes on the menu. ”