Pumpkin — one of the most picturesque vegetables.

Round, smooth, bright and brilliant — so we know and love her.

Types of pumpkins in the world a great many, and some rather exotic look. 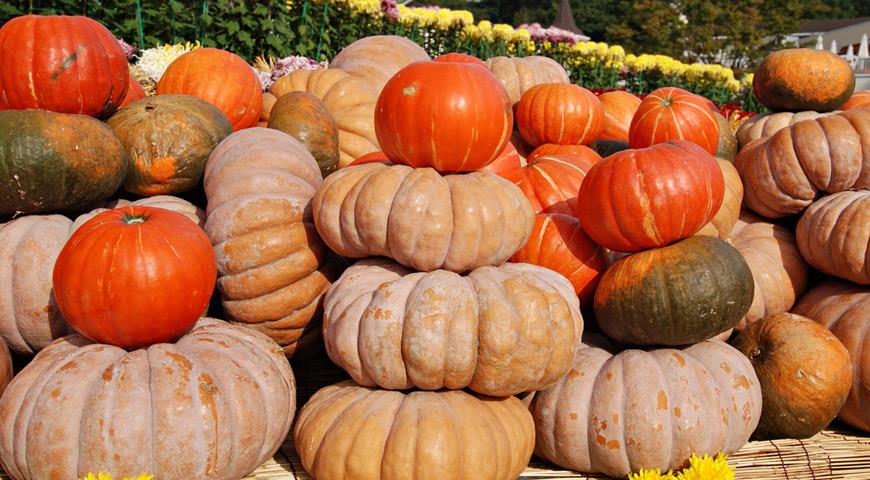 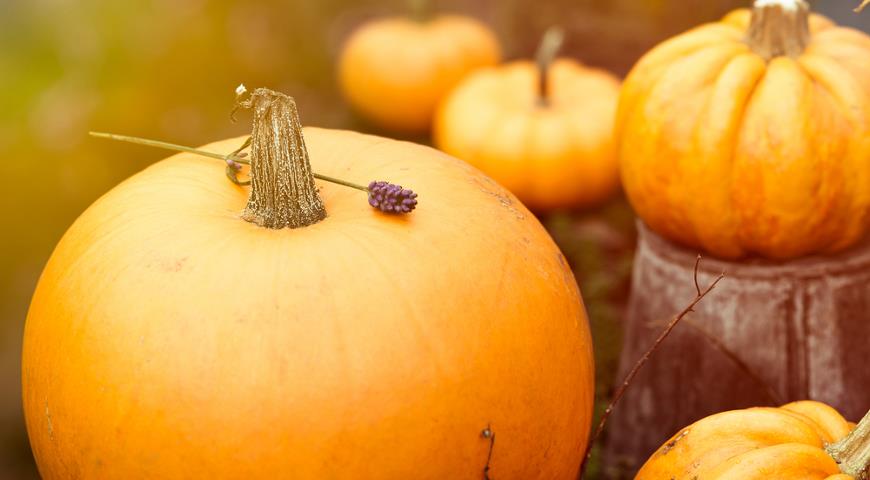 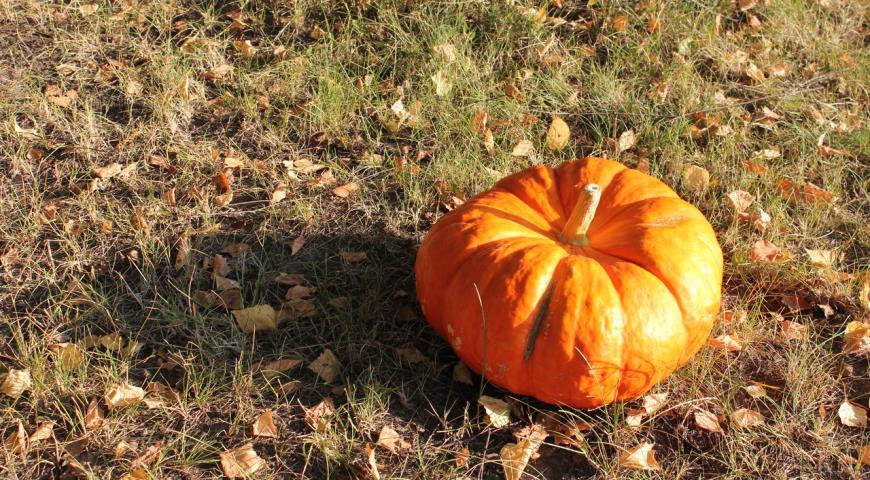 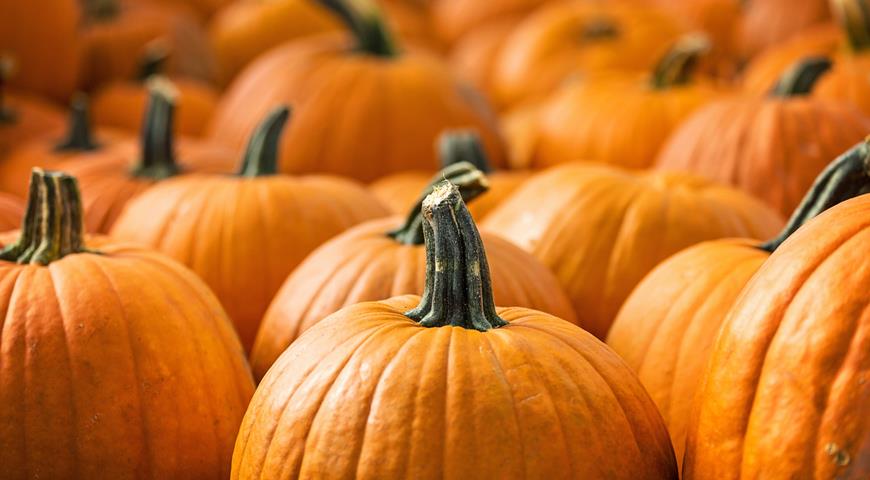 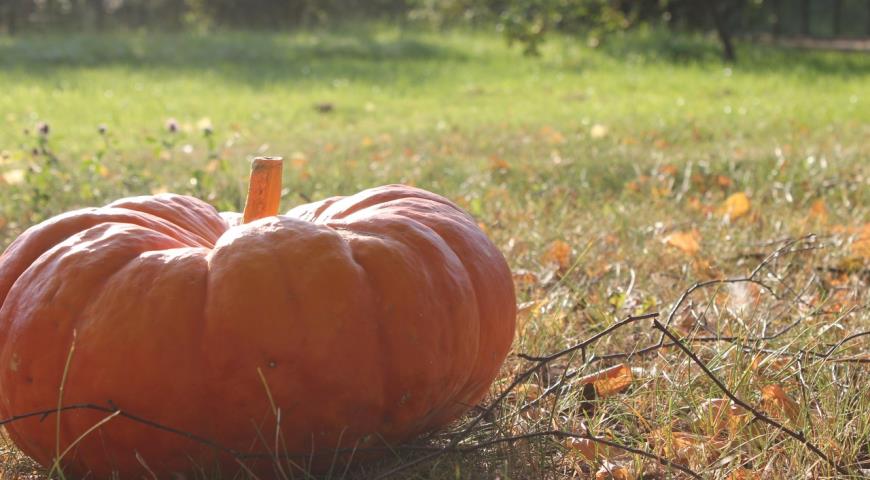 Pumpkin — one of the most picturesque vegetables.

Round, smooth, bright and brilliant — so we know and love her.

Types of pumpkins in the world a great many, and some rather exotic look.

The ways of their preparation are just as varied: these fruits are eaten raw, baked, added to pilaf and stews, stuffed (with rice, vegetables, fruits, nuts, minced meat), stewed with lentils, they are cooked with jam, soup (which can be served table in the «pot» of pumpkin peel).

Butternut Pumpkin (Cucurbita moschata) — the tastiest. It is sweet and aromatic, it can be eaten raw (for example, in a salad), and you can make porridge, mashed potatoes, pancakes and pies from it.

In India, they even make excellent halvah!

But these pumpkins are also the most economical — inside there is solid pulp and almost no seeds.

This variety can be distinguished by a green striped or yellow-beige peel, and the fruit inside is light orange. The longer such pumpkins lie, the brighter the flesh gets, but, alas, there are less vitamins in it.

This type includes, in particular, a variety of elongated (like a zucchini) varieties.

Pumpkin (Cucurbita pero) — This is the same pumpkin, which mainly grows in our gardens.

Its fruits are small — from one kilogram, although there are also fruits weighing up to 20 kilograms. Pumpkin we have a ribbed stem, hard and pubescent.

The bark of her, as the name implies, is very hard, the fruits have a pale or brown-orange color with dark stripes.

Pumpkin seeds are the most delicious. There is even such a type of hard pumpkin — gymnosperm, in which the seeds can be eaten without cleaning.

It is a pumpkin of this type. (Cucurbita pepo subsp. Pepo var. Styriaca) used in Styria (Austria) for the production of the famous Styrian pumpkin seed oil.

Another type of hard pumpkin — pumpkin spaghetti (Cucurbita pepo var. Fastigata): it is a half-bush half-tongue, a small elongated fruit of yellow color.

It fully corresponds to the name — or rather, not the pumpkin itself, but its pulp: after heat treatment, the fibers become thick and long — exactly the pasta.

Spaghetti pumpkin is baked or boiled whole, after which it is cut, seeds are removed and with the help of a fork with rotating movements (like spaghetti!) They take out the pulp.

It’s great to serve it along with real pasta, especially green, tinted with spinach, seasoned with butter, nutmeg and parmesan.

Large pumpkin (Cucurbita maxima) — These are several varieties of pumpkin with loose pulp, a lot of fibers and a thick (or very thick) crust, thanks to which it is perfectly stored almost until next summer.

There are different varieties of large pumpkin — very different shapes and colors.

You can bake a large pumpkin or make a soup out of it.

The main purpose of the biggest fruits of the large pumpkin is, undoubtedly, to bring joy, to raise the spirits. Tens, hundreds of thousands of bright pumpkins in the autumn turn into demonic vessels, which symbolize Jack’s lamp — a sinner and an eternal wanderer who deceived the devil himself and punished for it: all the guts are picked from the fruit, eyes, nose and mouth are cut out and a candle is put inside.

The seeds of the pumpkin are special fruits (for example, some types of solid pumpkin).

A relative of the pumpkin — and gourd (Calabas), from which to make traditional vessels.

There are also many ornamental pumpkin species and fruits botanically close to the pumpkin.

Pumpkin soup can be served at the table in a “pot” of pumpkin peel.

You can squeeze out a pumpkin the juice.

You can turn it into candied fruit and cook jam from it.

Pumpkin seeds — whole and ground — can be added to sauces, soups, salads, snacks.

Pumpkin season begins in September and lasts the whole autumn.

Since the pumpkin is very well stored, the winter months can also be considered as pumpkin season.

This rule applies to all its species.

Especially well stored are those varieties that contain the highest amount of starch.

In such pumpkins, the amount of sugars increases over time, which makes the fruit even more tasty and suitable for various types of culinary processing.

Pumpkins are usually collected already in mature form. The hallmark of maturity is a dried fruit stalk.

However, if you set out to keep the pumpkin as long as possible, then pick the fruit a little underripe — then they will ripen during storage. It is necessary to cut them with the stem, otherwise the fruits may soon rot.

If you cut off a damaged fruit, then it is better to immediately prepare some tasty dish out of it: it is no longer subject to storage.

note that when choosing a pumpkin in the store her optimal size — medium (pumpkins of particularly large size, although they look impressive, most often turn out to be too dry or, on the contrary, watery, and their taste is bitter).

The optimal pumpkin weight is 3-5 kg, not more.

The color of the pulp of the pumpkin should be rich yellow or even orange.

Remember that the color of pumpkin pulp depends on the amount of vitamin A in it — the more vitamin, the more saturated color — and has nothing to do with the color of the skin.

Always pay attention to the tail. In a mature pumpkin, it should fall off by itself.

If you see that the tail of the pumpkin is cut, it most likely means that it was torn off early and the vegetable just did not have time to ripen.

Such a vegetable can ripen at home.

Pumpkin peel should be thick (but not “wooden”!). Many housewives recommend pushing it with a fingernail, if you can not push through the skin — it means that the pumpkin is ripe.

If the skin of a pumpkin is thick and covered with natural wax (it protects the pumpkin from premature drying), this fruit will be stored much longer.

It is better not to buy a cut pumpkin, if the fruit is too large, ask the seller to cut it with you. A pre-sliced ​​pumpkin can be dried or rotted.

If you still decide to buy a sliced ​​pumpkin, there is a small trick: if there are seeds left in the pulp, take one of them and taste it.

The seeds must be ripe (which also speaks of the ripeness of the pumpkin itself) and large, which means that they have absorbed a lot of useful properties.

How to store a pumpkin in the cellar.

It is important to select ripe, intact and healthy fruits among the crops and not to damage the stem. Place each pumpkin with a stem up on racks or in rack boxes so that vegetables do not touch each other.

In the cellar, where the pumpkin will be stored, should be cool, dark and dry.

You should periodically look through the vegetables, if you find a spoiled one, you should immediately remove it away from whole pumpkins.

How to store a pumpkin in the apartment.

For storage, choose a dark and cool place where the temperature will be kept within 5-10 degrees above zero. You can store pumpkin on the glazed loggia or balcony.

In this case, you should place the pumpkin on the wooden racks so that the vegetables do not touch each other, and cover with a cloth or newspaper. It is necessary to cover the pumpkin in order to avoid direct sunlight, as well as in case of a sharp drop in temperature below +2 degrees.

In this case, you should cover the pumpkin tightly with a warm cloth or straw.

How to store cut pumpkin.

Pieces of sliced ​​pumpkin are best kept in the refrigerator.

To do this, cut the pumpkin into slices, peel and remove seeds. In the refrigerator such pumpkin can be stored from 8 to 10 days.

Increase the shelf life of pumpkins in the refrigerator up to one month can be, if you tightly wrap a piece of pumpkin in foil. In freezer pumpkin can be stored for more than a month. To do this, the pulp of the pumpkin should be put in plastic bags and tightly tied to prevent the ingress of excess air.

Best of all, hermetically closing trays are suitable for storing pumpkins in the freezer.

But after defrosting the pumpkin may be too watery.

How to store dried pumpkin. Pumpkin can be dried in the same way as apples and mushrooms.

It is best to use a vegetable electric drier for this. In the dried form, the volume of pumpkin is significantly reduced, so the vegetable will not take up much space during storage. In order to dry the pumpkin in an electric dryer, it should be peeled and peeled and cut into slices.

The thickness of each piece should be about one centimeter. Then you should blanch the pieces of pumpkin in boiling water, dry on a sieve and put in an electric dryer. If you do not have electric dryers, you can dry the pumpkin in the oven, heated to 55-60 degrees.

Dried pumpkin should be placed in a tight-fitting container, which should first be lined with wax paper.

Dried pumpkin can be stored for up to 12 months. 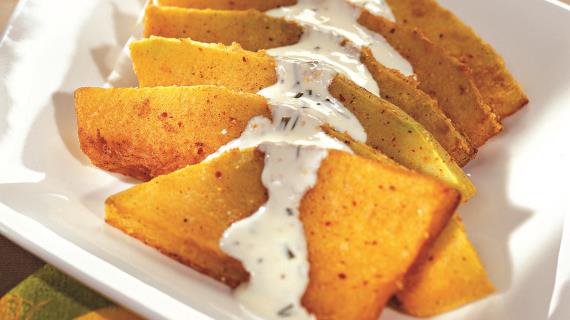 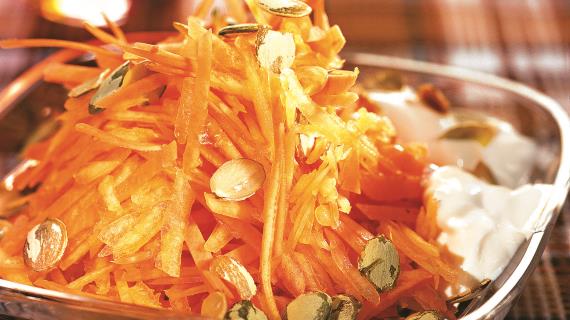 Pumpkins make cold and hot salads. In its raw form, it goes well with carrots, apples,.