In the last autumn days, when the snow had not yet covered us, I walked through the shops of the capital and found a product of wondrous beauty, reminiscent of the passing season — a paste called “Autumn Leaves”. 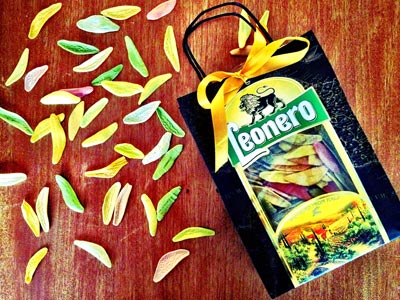 Made pasta, As it should be, in Italy, it is made from durum flour, and the spinach, tomatoes, beets, carrots, turmeric, basil and black cuttlefish ink added to the dough give it a cheerful coloring.

Of course, prepared according to the accepted rules — al dente.

The sauce did not — in order not to disturb the delicate colors of the product itself.

Just sprinkled with parmesan — and be so kind! The paste had an amazing vegetable taste and aroma of late autumn — wet grass, rotten leaves, rain …
I do not remember when multicolored spaghetti appeared in Moscow stores for the first time. But I remember exactly when I first saw them.

This did not happen in Italy at all, but in Monaco, where I found myself sometime in the fall, in the mid-1990s.

I wrote an article about an international scientific conference that was held in Monte Carlo. I went to the trip in the company of two speakers, brilliantly-educated Russian scientists — young candidate of science Dmitry Dmitrievich and a venerable professor.
Semyon Yakovlevich.

The conference went on as usual, and in the evenings the three of us roamed the glorious little town.

We started with the Golden Square, where at least two steps from the famous casino is located at least the legendary «Cafe de Paris«.

It was rumored that a cup of coffee in it costs more than in any other restaurant in the world. It turned out to eat «in earnest“In the cafe it will not succeed — not so much because of the prices, but because of the lack of dishes on the menu.

AT «Cafe de Paris“You could only have a nice snack.

Dmitri Dmitrievich and I ordered snails, but the 72-year-old Semyon Yakovlevich suddenly capricious.
— Do you have macaroni? — he asked the waiter severely for some reason in Russian.

He smiled back, confused.
— Semen Yakovlevich! — we whispered, giggling. — Pasta is not served here!

Yes, and in Russian do not understand.
But the colorful and solid Semyon Yakovlevich was not used to being cross stitch. The author of many books and scientific articles in English, who speaks it perfectly, suddenly slammed his fist on the table, again addressing the waiter in Russian:
— I ask you: do you have pasta ?!

Ordinary, with cheese!
There was an awkward silence in the hall.

Dmitry Dmitrievich and I looked around with strained smiles — fortunately, the visitors smiled good-naturedly, looking at our non-standard trinity.
— Can I help you with anything? — asked the confused waiter.
We «unscrambled”To him the requirement of a professor who, being completely angry, completely refused to speak a foreign language.

The waiter retired and returned with the manager, who with an apology confirmed that spaghetti they really don’t. But the professor, shaking his hand in the air, was already loudly chanting:
— Pasta!

Pasta!
“Well, well,” the manager sighed, “you have to wait a bit.”
Soon we were really brought a plate of multicolored spaghetti — pink, green, purple, from which the divine aroma emanated.
— It happens such a beauty! — We looked at Dmitry Dmitrievich with delight.
— Al Dente! Said the waiter, bowing respectfully to the professor.

Alas, none of the three of us at that time understood what it means — al dente.
— Wow!

More fun! — already good-naturedly smiled Semyon Yakovlevich.
The situation seems to be discharged. True, the professor did not like spaghetti at that time:
— Some kind of tough, — he commented. — Even they do not know how to cook!
And at the end of the evening the manager came up to us and politely asked: how are we spaghetti?
“Macaroni is like macaroni,” answered Semyon Yakovlevich. — My Tanka cooks them better in Moscow.
Perhaps it was true.