Главная » Cooking » Oktoberfest — the main beer festival of the planet

Oktoberfest — the main beer festival of the planet 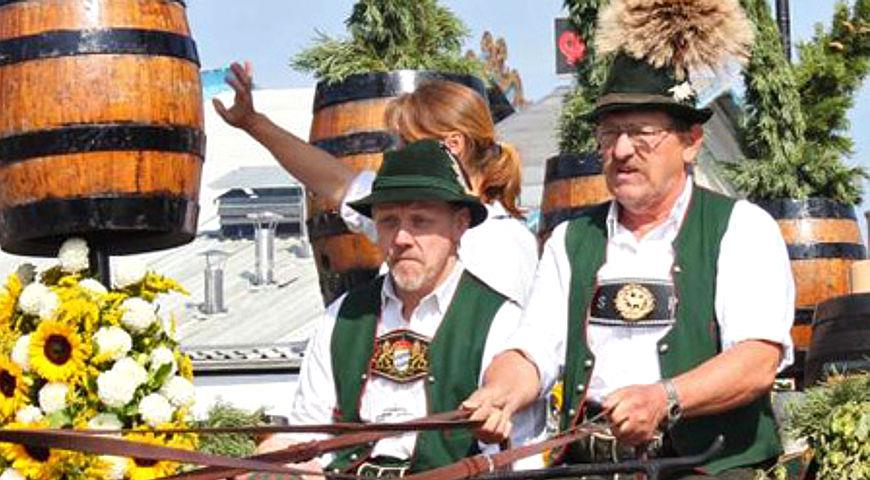 Whoever believes that the whole Oktoberfest reduced only to beer, deeply mistaken. There are too few places left in Europe where the surprisingly lively and full-blooded folk tradition expressed in the beer carnival has survived in such inviolability and with such a prominent bulge.

Not to mention the fact that rarely where you can become a direct participant in such a large-scale Rabelaisian event and at the same time a fantastic folklore and theatrical performance. 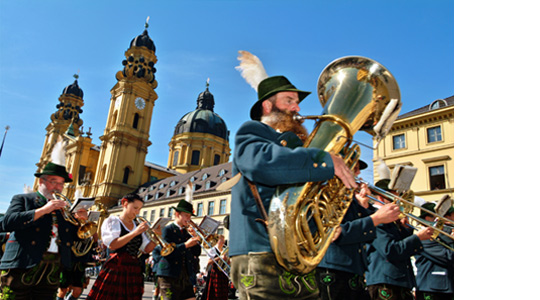 This very direct participant becomes immediately, on the very morning when you sit on the Munich electric train (U-bahn or S-bahn) to ride on Terezin meadow (the station is called — Theresienwiese). To go from almost anywhere in the city for no more than 15-20 minutes.

And from the Old Town, for example, from Karlsplatz (Schtachus), can be within walking time.

At the same time, you still find yourself in a stream of people, purposefully stomping in one direction.

But most importantly, what is this human flow.

On men, leather shorts (lederhoze) or suede breeches, thick stockings, rough shoes with wrought soles, white shirts with a pattern on the chest, multi-colored waistcoats or jackets with metal buttons. On the belts there are sparkling garlands of old coins, knives with dial handles sticking out of the side pockets, attached with chains to the belts, hats with feathers or plumes of bear wool on their heads (it is assumed that the owner of such a plume personally threw the bear). And what beards, sideburns and mustaches can be seen in tall and massive Bavarian men!

Beards, combed in two, braided, sideburns like a Franz Josef I, a mustache hanging like a Cossack, sticking out like a tassel “a la Wilhelm II”, and even a mustache curled around the ears. 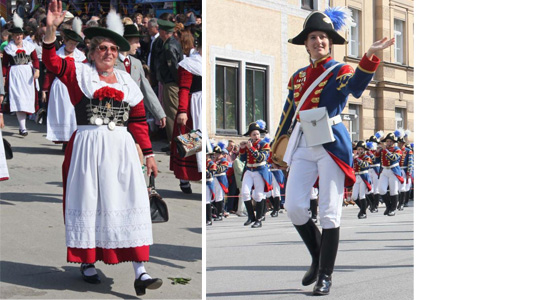 And you can see what to wear a national costume on the opening day Oktoberfest they consider it their duty to be people of very different means, social status and, most importantly, age.
Fun-making people build up along the street leading from the cathedral of Sts. Paul’s to gate Meadows terezina — a huge arch on which is written Oktoberfest and Willkommen!

The people are getting bigger, the back rows are pushing, but there is not the slightest sign of a crush.

And now it was 11:00, and the shrill sounds of flutes and drumming were heard closer and closer — the first orchestra opening the ceremony marches. The public begins to roar enthusiastically, whistling and screaming “ye-ee-huh-y. «. 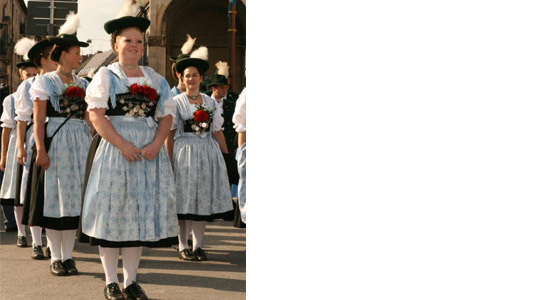 But this is still ahead, but for now, more and more new orchestras, led by impressive vestige majors, juggling with silver maces, are passing under the arch. The musicians in national costumes, in the uniforms of the Bavarian royal army, in medieval garments sewn from colorful patches, clearly typing a step, blow something very militant out of their pipes and flutes.

Drummers, virtuoso playing sticks and tossing them into the air, with enthusiasm beat the drums.

But the main characters of the procession are not they — after the orchestras, decorated carts roll, they are dragged by six bityugs with elegant tails and manes, into which silk ribbons and garlands of bells are woven. On the carts, merry guys and aunts are seated, waving beer glasses and right there on the carts, pouring new portions of the divine drink from their barrels and absorbing it with powerful sips.

These are representatives of famous Bavarian breweries! Each delegation is led by a horse-drawn lass of the Bavarian nature complex, welcoming the public.

From time to time, cart-drivers begin to skillfully click their whips in the air and keep yelling “ye-ee-huhh. ”, Receiving in response enthusiastic screams and whistles.

Under the arch proceeded several carriages with some important persons. Among them is the burgomaster Munich, which is destined to open Oktoberfest.

If you are going to the opening ceremony, then you have to choose — either in advance go to the booth Schottenhamel, where, in fact, the ceremony takes place, or to stay at the entrance to Terezin meadow, that is, near the arch or further along the streets (up to Siegtor in the city center) and watch the parade of the orchestras and the passage of the Brewers.

At the same time in the shed until 12:00 you will not be poured beer for anything, but in the afternoon you will be one of the first to get a beer of the new harvest. And while everyone is waiting for the arrival of the burgomaster …

Here he is — the burgomaster rises on a wooden platform and with a precise blow of a hammer knocks the cork out of an ivy-covered barrel, deftly puts a weighty mug under the frothy stream and, lifting it up, announces: “The first barrel is open!” rollicking drumming, the rhythmic thud of hundreds of drums and marching music of dozens of brass bands.

Imperceptibly, all this cacophony is formed into the majestic melody of the capital’s anthem picked up by thousands of voices Bavaria, that, “while the Isar carries its beautiful waters, it will not disappear in our Munich fun and comfort. 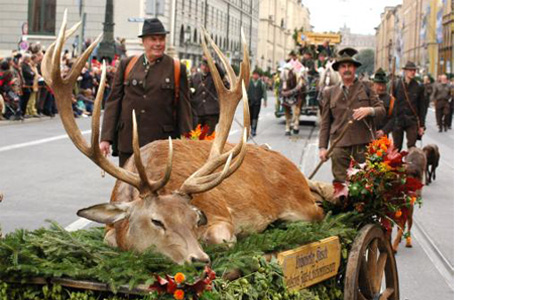 Meanwhile, the parade is still going on — marching, drumming and blowing the orchestra, hooves the horse, the brewers caw, the audience roar and whistle, the coachman smacks with whips, the horse maidens send out kisses.

But then the last orchestra died away and died. The procession completes the line of horse police — razhih barbel in polished boots. Separated in two, they gently crowd the horses right under the arch Teresina meadows, after which it begins to suck into itself the bottomless bowels of the booths — each the size of a small stadium. 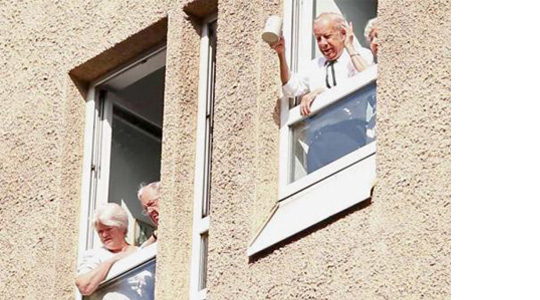 Oktoberfest counts his biography from October 12, 1810 — the wedding day of the Bavarian crown prince Ludwig and princesses Teresa of Saxon.

All residents were invited to the festivities with free beer, snacks and horse racing. Munich, who gathered in a large meadow. In honor of the princess meadow called Theresienwiese.

Everything turned out so great that Ludwig ordered to celebrate Oktoberfest annually. In 1811, a holiday of farmers was added to horse racing with the display of horses and bulls. In 1818, carousels were installed.

Then the first beer stalls were set up.

In 1881, the world’s first and largest chicken broiler was opened. Carnivals were not held during the wars. After World War II Oktoberfest opened in 1950 and since then passes annually.

2019-05-03
admin
Предыдущий What not to do at home: 10 major prohibitions of feng shui
Следующий The mystery and meaning of the name Feramont