Mustard is greens, which is used in salads, and one of the most popular condiments in the world from ground-to-powder defatted seeds of the same plant. 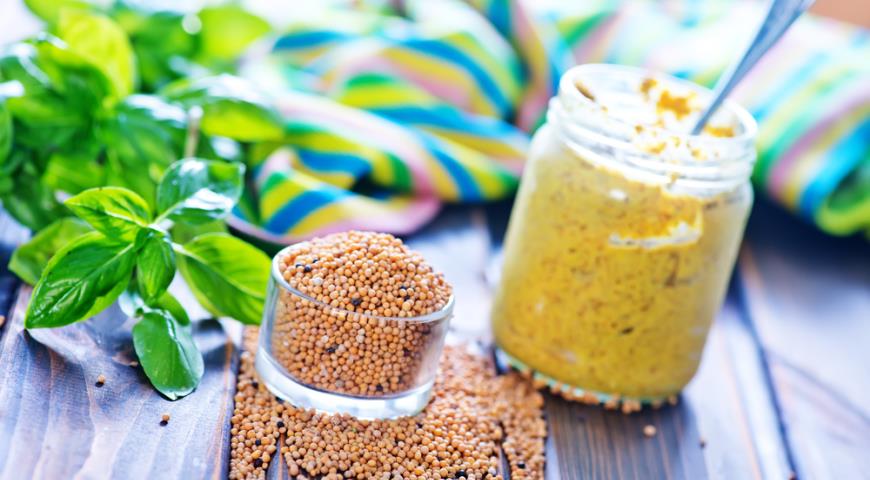 Mustard is greens, which is used in salads, and one of the most popular condiments in the world from ground-to-powder defatted seeds of the same plant. She comes from the cabbage family.

Mustard seeds as a spice used since ancient times Hindus and Greeks, Jews and inhabitants of ancient Sumer.

Interesting fact: in 33 BC. er mighty king Darius sent a call Alexander the Great in the form of a bag of sesame seeds, which symbolized the countless hordes of Persian troops; in response, Alexander sent Darius a small bag of mustard seeds, making it clear that his army, albeit with a smaller number, but the soldiers would be “hotter”.

It was from black mustard in France that the famous light Dijon mustard (Dijon mout arde). Now it accounts for more than half of the total world production of mustard seasonings, however, in our production for the production of Dijon mustard, seeds of indian mustard (or its blend with white) are more often used, which is historically incorrect.

For the preparation of Dijon mustard, the powder of seeds cleared from the shell is diluted not with water or vinegar, but with white wine or verjus — with the acidic juice of unripe grapes.

Sarpetan Mustard Seeds almost round, odorless, with a pungent taste.

Its homeland is considered the Himalayas, and has long been cultivated in India.

The English sometimes call this mustard “brown mustard”. Since the XVIII century, this type of mustard is well known in Russia — thanks to German colonists who settled in the Volga region, namely in Sarepta, near Tsaritsyn (Volgograd). In 1810, Sarepta mustard gained access to the royal table, for which Alexander I awarded the breeder with a gold watch.

The import of mustard from England was stopped.

Sarepta mustard (as a type, and not as a local product) is still the most common mustard in our country (sold both in the form of mustard powder, and in the form of ordinary table mustard).

Today a special place in the world of cooking is Creole mustard (Creole mustard), established in the US state of Louisiana by immigrants from Germany. This spicy spicy seasoning is made from the seeds of Indian (Sarepta) mustard, pickled in vinegar, mixed with grated horseradish.

Chinese mustard is also made from these seeds — it has a very expressive taste and is considered the most spicy.

White Mustard (English) — Another popular type of mustard, originally from the Mediterranean. It is widely distributed in Europe, the USA and Canada.

From its light yellow or brownish seeds, almost round, odorless, with a pungent taste that occurs under the influence of moisture, mustard seasonings are made in the USA, Germany and England. By the 17th century, the city of Tukesbury, where they produced mustard powder, had become the recognized center of English mustard production — they were mixed with apple juice, cider or vinegar before consumption.

Among the popular brands are Colemans (Colman’s, associated with the name of the Norfolk miller Yeremia Coleman, who started its mass production at the beginning of the 19th century), Durham mustard (Mrs. Clements from Durham began making mustard powder at the beginning of the 18th century and delivered it from the city itself into the city, advertising its product as Durham Mustard, which, in fact, translates as Durham mustard).

The Italians cook with a variety of white mustard various mashard sauces — spicy marmalades of fruit and mustard.

For mustard seasoning, seeds of several species of this plant are used — black (French), Sarepta (Indian) and white (English) mustard.

Black mustard has a sharp, tart, taste that resembles horseradish.

However, the sharpness of its seeds completely disappears during long-term heat treatment, so for the preparation of spicy and spicy dishes they are added only at the last moment.

But the characteristic sharp aroma of seeds disappears, on the contrary, when they are dried, but in the process of culinary processing appears again.

Black mustard is very popular in the East. Indian cooks always pre-fry the seeds in melted or vegetable oil, which is why they acquire an interesting nutty taste and aroma, not comparable with any other spices.

Black mustard seeds are included in the Bengal spicy blend of “punch-phoron” and in the South Indian “sambar-podi”.

In China, they are put on whole or ground into various sauces, minced meat, vegetable and meat dishes.

Today, for the preparation of mustard as a seasoning (i.e., sauce), the powder of dried and worn mustard seeds is often brewed with water and a special marinade is added to the swollen mass — weak vinegar (wine or apple) with spices (cinnamon, pepper, bay leaf, tarragon, celery, onion, garlic).

It is difficult to list all types of finished mustard: with chili, capers, anchovies, various herbs, and instead of vinegar (wine or apple), champagne, sherry or a mixture of lemon juice with fruit puree are often used.

Carpaccio is the same symbol of Venice as the carnival mask. Simple and aristocratic. 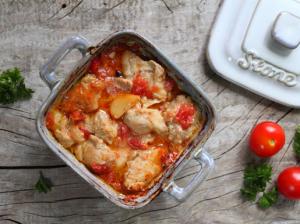 Blogger Alesya Ustinova knows how to cook the most delicious dinner with a minimum of effort.

Try to buy for this recipe a chicken that grew and fed on a free pasture. In such.

To pike perch in the pan did not get dry, watch the time — portioned chunks.