Главная » Cooking » Members of the group VIA Gra, Albina Janabaeva and Eva Bushmina about the attitude to diets

Members of the group VIA Gra, Albina Janabaeva and Eva Bushmina about the attitude to diets

Members of the group VIA Gra, Albina Janabaeva and Eva Bushmina about the attitude to diets 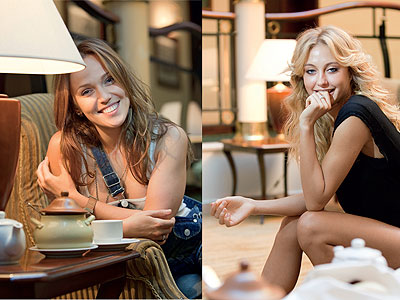 — Airports, hotels, banquets and other «charms» of touring life.

And how can you preserve beauty, waist and a healthy stomach?

Eve, for example, always orders a cucumber salad, and even if it is not on the menu, they will definitely make it for her.

Cucumbers peel, remove them from the seeds.

Each cucumber is cut figuratively.

And then from the seeds and vegetable oil preparing the sauce.

And, of course, no salt.

“Is salt a white death?”

But do you really eat some cucumbers?

Eve: Of course not.

We eat different dishes — both meat and fish, but steamed.

After them the stomach never hurts, you feel comfortable.
Albina: I try to combine protein and vegetables.

But perhaps we really limit ourselves only in desserts. In general, all violations of the regime begin with Eve, it is she who usually leads us astray.

He orders everything that is possible and impossible, and says: “Girls, this is just today!” Eve eats both bread and butter, and spaghetti with seafood in a creamy sauce, and borscht, all that is high in calories and breathtakingly tasty.

But, as you can see, these liberties are not reflected on her figure.

— Does exotic have a place in the menu?

Albina: Well, Japanese cuisine is not exotic for a long time.

I really care about all sushi and sashimi.

But, I think, in the trip you should always try something local. I really like spicy Thai soup! In Thailand, she even asked the chef for a recipe and brought lemon grass with her.

Then I found her and with us.

I even cooked this soup in a TV show — everyone enjoyed it very much.

— Do you visit each other?

If I am going to visit Albina, I’m definitely waiting for pies from her. She is a baking master.

Recently I told you that I baked a cake according to the recipe of 1835.
Albina: I saw him in a magazine, and I really wanted to cook, which, by the way, rarely happens to me. It’s not even a pie, but rather a casserole.

Old Russian food. It is called krupenik and has a rather specific taste.

It’s simple: boiled buckwheat porridge, mixed with cottage cheese, and all this is baked. I like milk very much.

In the morning, be sure to eat yogurt or cottage cheese. I adore cheese with tea, and this is enough for me.

And at lunch — soup.

Can you cook a real borscht?

Eve: Of course I can. I love borsch, but atypical — with beans and fish.

It is incredibly tasty, the same nourishing, as with meat, although it is considered lean.

Even in my repertoire there is Ukrainian cabbage — it is cabbage soup with millet, sauerkraut and with grated potatoes, a very interesting dish.

— In the kitchen, do you feel like a fish in water or problems?

Eve: When I last cooked, cut my eyebrow.

Eve: It just happened — my mother left, there was no one to cook, and I decided to «call the fire on myself.» Out of spite the skeptics conceived to make a fish steamed.

She began frantically searching for spices, then calling her mother and asking where these damn spices were standing, turned sharply and hit a corner.

Now the scar has remained.

A week later, on tour, Albina and Nadia (Nadezhda Granovskaya, the third member of the group — Ed.) Had a secret photo session while I was sleeping.

With a scar and a bruise everything was very beautiful!

We were still joking that there was hazing in the group.

— Is there really no bullying?

The press is constantly exaggerating rumors that Eve is leaving.

Albina: They write some nonsense!

I, even if I read, do not perceive what is written about VIA Gro.

We are normal people, of course, we can argue, but we don’t have serious conflicts and quarrels.

— Are you still not tired of frank costumes, the image of sex symbols?

Eve: There are such days when you want to close on everyone, including in clothes.

We always have a choice: swimsuits with nets, dresses, jackets, gloves.

So with the costumes are determined before the concert — in the mood. But they all create the image of the group — this is part of the show.

And then, frank outfits do not allow to relax at the table.

— You always look on stage toned and fresh. And at the same time, as it turned out, allow yourself bread and butter.

How do you manage to keep yourself in shape?

Albina: You just need to decide: what you eat, and that — in any case. And «diet» is generally a terrible word!

I tried a couple of times — and remember while a nightmare. Another torment ends, you start to eat as usual — and you have to look for a new diet.

And so from week to week, from month to month.

And this is bad for health and appearance, for its own nervous system and for others.

It is necessary to eat a balanced diet, and not torture yourself with hunger.
Eve: It is important to control yourself and eat reasonably. Consult with nutritionists, understand what your body perceives and what rejects. But in any case, I believe, one should not deny oneself in small weaknesses, there should be both fasting days and loading days.

If you really want ice cream, then allow it to yourself!

It’s clear that not every day.

We usually arrange a boot evening before the concert.

— And then on the stage you burn all the calories cheerfully?

Albina: Of course, but generally it would be better not to eat two or three hours before the concert.
Eve: The main thing — do not sing on an empty stomach.

Is it really to act when you have a weakness!
Albina: And most importantly, we must not forget about the sport.

— Do you have enough time for gyms?

Touring tours, but still we live at home, not in airplanes, so you need to be able to organize yourself, get to go to the gym.

— Can you see you in supermarkets or in the market?

It seems to me that when the season of some fruit and vegetable comes, it is him who needs to eat, these are living vitamins.

I am very glad that I have found a grandfather who sells her mulberry and raspberry in the same place.

I now have a regular customer.
Albina: And you have him — a regular listener!