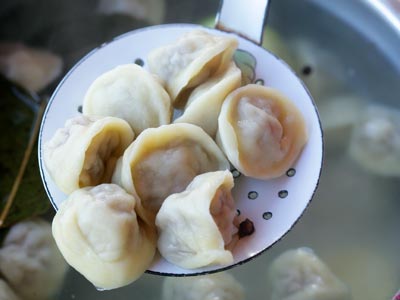 Trying to remember how old I was when I learned to sculpt dumplings. I remember exactly that I walked under the table on foot, and my grandmother had already set me, a three-year-old, on a stool, tied a towel around my tiny calf and gave me a small flat dough cake.

I put a ball of meat on it, plucked the edges and spread it on a large wooden board sprinkled with flour.

It was not even a board, but a huge wooden shield.

On it already lay slender rows of dumplings, molded by grandmother, great-grandmother and aunt.

My copies were knocked out of the general ensemble: crooked and thin or so pot-bellied, that the stuffing fell out.

But grandmother never, never reworked them!

On the contrary, each time, putting a plate with hot dumplings on the table, she said: “This is Natasha blinded«.

Now I sculpt dumplings with own children.

True, unlike my grandmother, I do this extremely rarely.

Because it is ungrateful to mold dumplings on our huge family. All of them are adored, they are eaten almost instantly, but to produce them in the right amount of physical and moral strength requires a lot. Every time I mature and mentally gather strength to make these dumplings.

For me, this is a kind of energy explosion.

I often make mincemeat the day before — in order to somehow minimize time costs.

I skip the meat in equal proportions pork, beef, lamb and one onion.

Season with salt and pepper.

Then I beat well on the table, taking small portions. If a minced meat very cool, add some water.

And my grandmother always kept frozen meat broth for such a case, adding it in crushed form to mincemeat.

During cooking, the broth melts, making the dumplings incredibly juicy and fragrant.

In the morning I make dough.

Three balls. In each and a half cup of flour, one egg, half a teaspoon of salt, a tablespoon of vegetable oil and a quarter cup of water. It interferes easily, it turns out smooth and elastic.

Leave him alone for half an hour.

During this time I drink a cup of gorgeous black tea with milk and sugar, in order to add to myself a positive and tune in to the desired wave.

Dumplings I usually mold on the same technology: I divide a ball of dough into four parts, each thinly rolling it out. Then, using a cut glass, I cut out the same size circles.

Children at this time roll balls of meat.

Then we put mince on each circle, we pinch the edges and put them together.

Pelmeski are smooth and beautiful. Only one problem: roll out the rest of the dough for the second time.

It is more difficult to make, because the dough loses its elasticity.

The second time it takes a lot of effort to roll such a dough, I don’t even speak about the third one.

It takes a lot of time.

As it seems to me, it is less energy consuming. I roll the dough with sausages and cut them into small pieces. I roll each one into a thin circle, put the stuffing in, and then everything is as usual: I pinch the edges, connect, roll in flour and spread on a wooden board, sprinkled with flour.

Of course, such dumplings are not perfectly even and the same. But it seemed to us that we were much less tired of such modeling, and the waste in the new version was zero. No homemade noodles!

It took only three hours to clean the time, and the result — 340 dumplings.

Children are happy looking at their work.

And I, every time my hand stretches to remake their Kriven’ka dumplings, remember my grandmother and do not change anything. 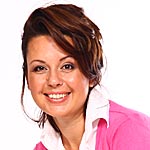 Natasha Skvortsova:
“I have four children and, of course, most of the time I spend in the kitchen.

I perceive any information from the point of view of its application to cooking. When I meet a new person, I look into his eyes and try to guess what he eats for breakfast and what his lunch consists of.

Very often, according to eating habits, you can make a psychological portrait of a person.

I do not have branded recipes.

I cook so many and varied that there is no need to repeat the same dish several times.

If something touches me in a dish, I take it as an idea as a basis and develop it.

I do not like the phrase «author’s cuisine.» All the basic culinary techniques invented before us. You can only change something, customize for yourself, to your tastes.

I can stand at the stove all day and get an incredible thrill from it.

I like to watch the soup gurgle in a saucepan and the clear broth overflows with amber bubbles. I love the smell of fried onions and garlic. I like the warm softness of yeast dough and the flavor of cherry pie with cardamom. 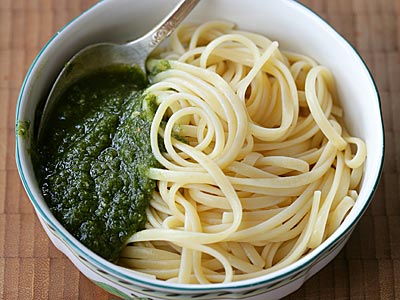 Our family is quite Italian. First, a lot of children. Secondly, the cult of pasta.

We eat them every day: boiled, fried, sour, sweet, spicy, with sauce and without. 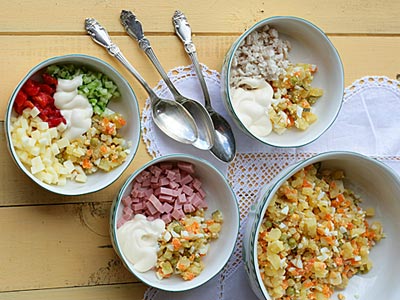 What a New Year without Olivier! On ordinary days, I make this salad not so often, but on New Year’s — this is holy. Spouse immediately orders Russian salad with doctor sausage. 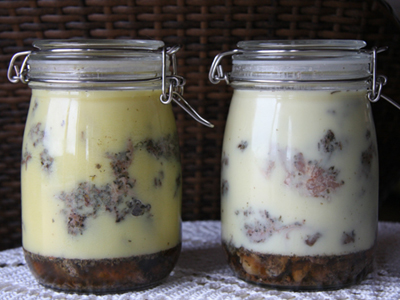 It’s time for geese and ducks. I buy them at the beginning of November, when fat birds had already worked up everything that needed to be fed for winter. I always take from Lyuba. 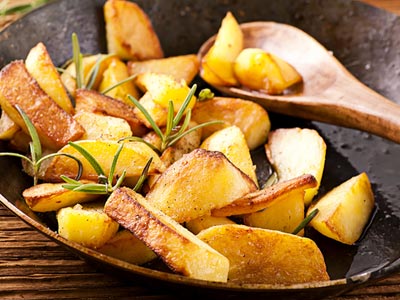 Fried potatoes are an unsurpassed hit on our table. And each family member has their own recipe for its preparation..

The fastest and easiest for men. I take beef tenderloin and cut into large cubes.

Salt and roll flour. I heat the pan well with vegetable oil, fry the chopped onion.