Khychyny, lacums, yak meat and other gastronomic sights of Kabardino-Balkaria

Khychyny, lacums, yak meat and other gastronomic sights of Kabardino-Balkaria

Kabardino-Balkaria is notable for its special charm of mountain landscapes.

Most tourists travel to the Caucasus just to see with their own eyes the blue alpine lakes and the most beautiful waterfalls. 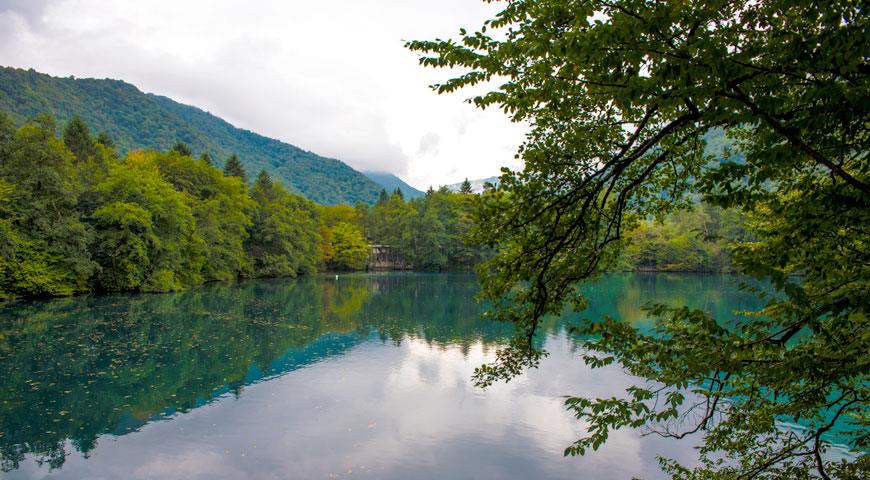 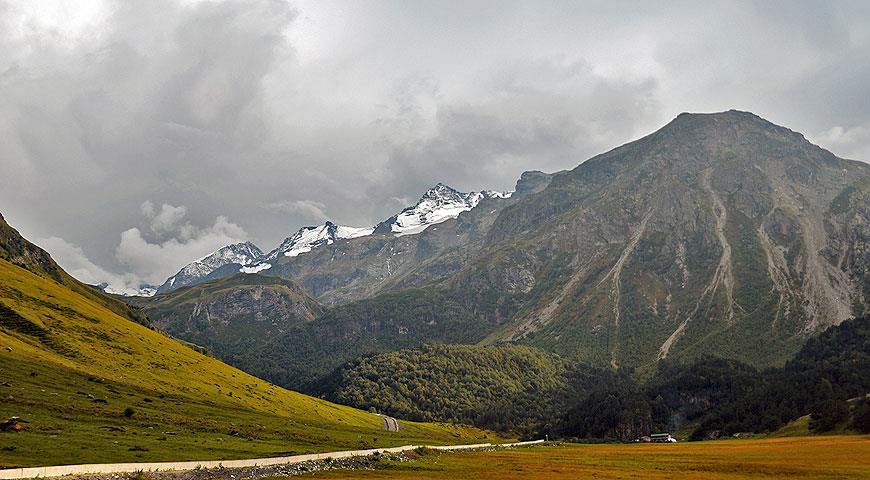 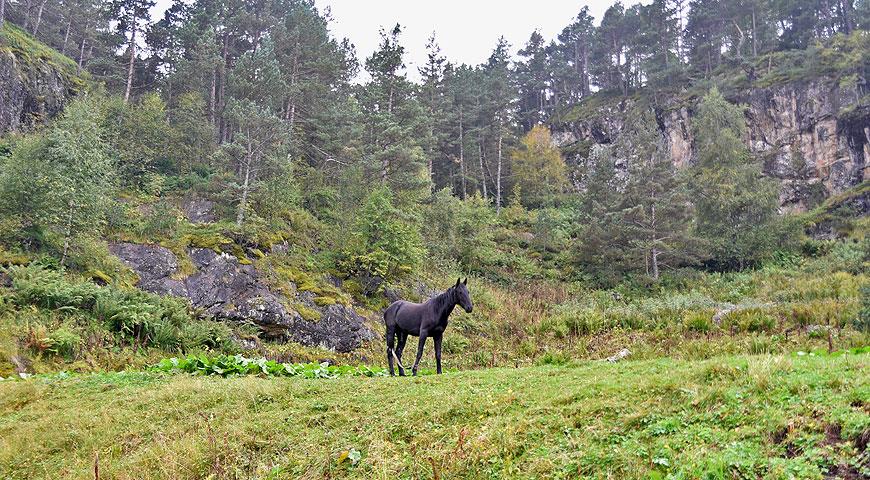 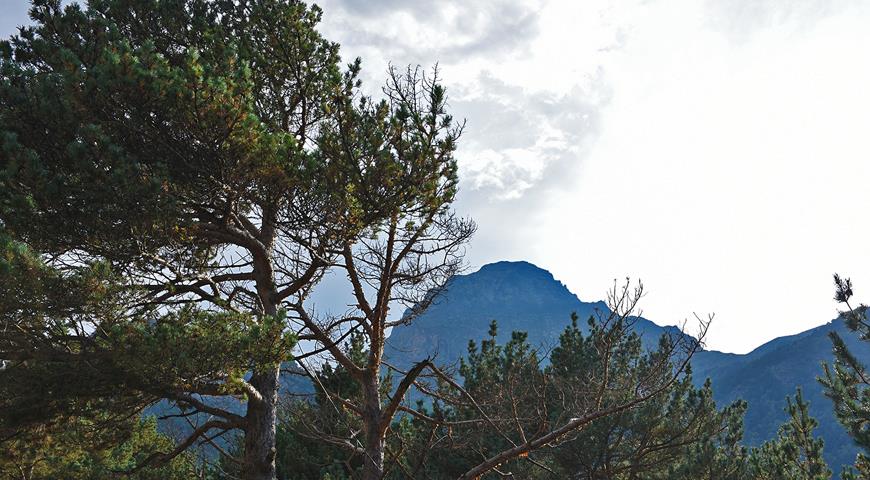 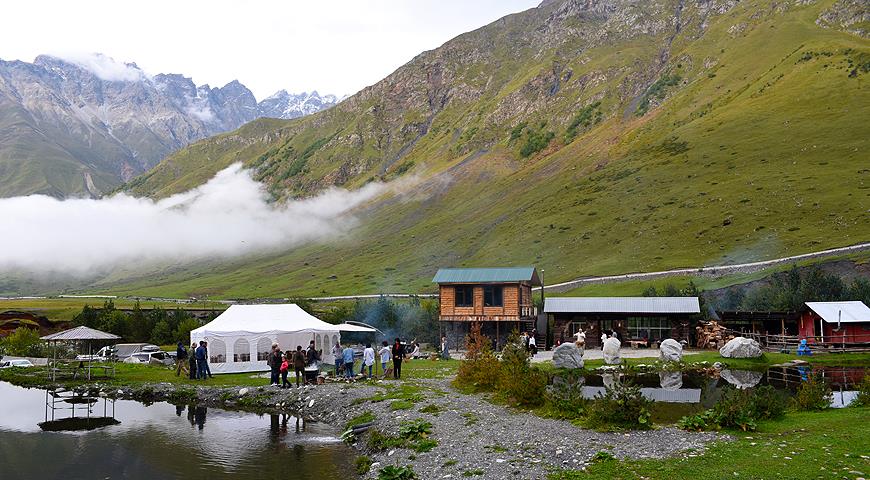 The highest point of Russia is Elbrus (5,642 m) and it is located in Kabardino-Balkaria.

Most travelers dream to see exactly Elbrus. But do not forget that there are still many places in the republic that are able to impress with their beauty the most avid traveler.

And, of course, there is something to try this gastronome traveler!

What can you see and try in Kabardino-Balkaria?

Of course, any trip is limited in time, but I want to see so much! And if you have very little time, you just have to visit:

The city will please travelers with a large number of attractions and a huge central park (Atazhukinsky garden) with lakes.

From a bird’s eye view of the city, you can look up to the observation deck, to which a cable car leads from the park.

But perhaps it’s still easier and safer to get there by car or walk.

On the observation deck is the restaurant Sosruko, which has long been one of the attractions of Nalchik.

In the 50s of the last century, a competition was announced for the best project for a restaurant. The architect Palagashvili won, who offered to make him in the shape of the warrior’s head and his outstretched hand with a torch, in honor of the hero of the national Nart epic Sosruko.

In the helmet of the epic knight is an observation deck on the city. 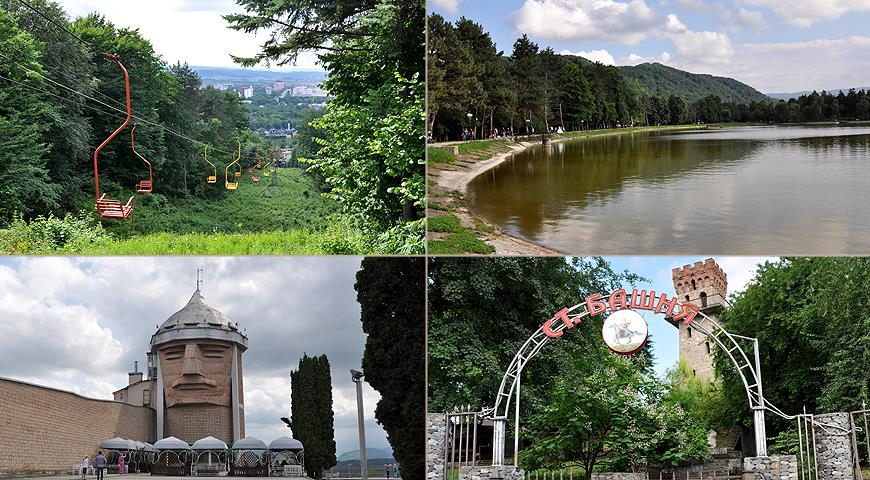 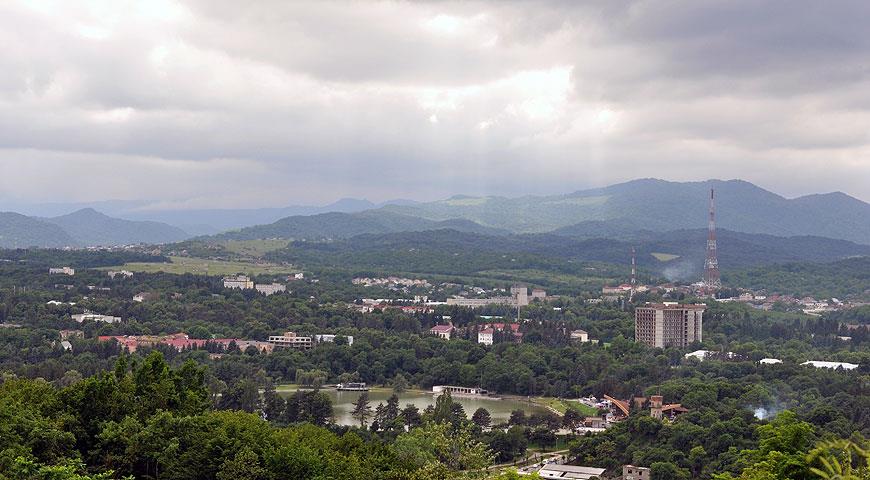 Known for its unique blue lakes!

At an altitude of 809 m. located Lower Blue Lake. Not a single river flows into it, but springs are constantly running away.

Both in winter and in summer the temperature of the water in it is very low, about +9 ° С.

So, swimming in it is problematic, but divers are very fond of the lake. 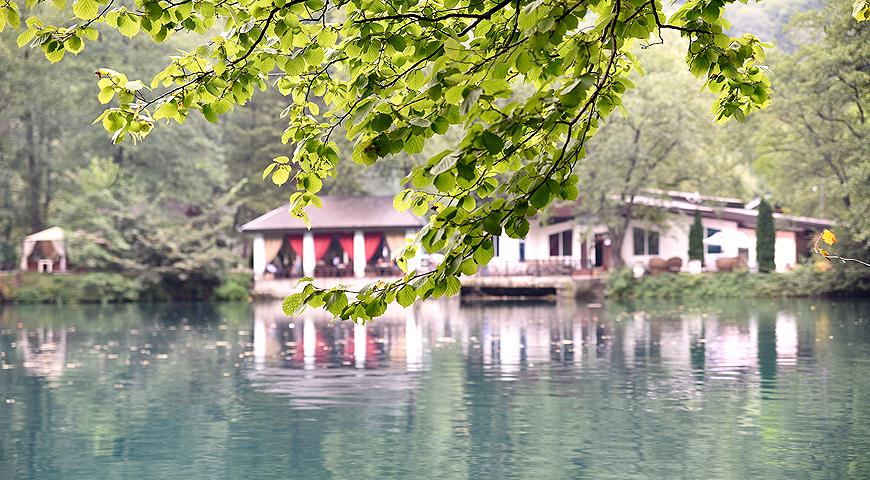 After the lake, tourists often visit the old mountain tunnel and make a stop at an unusual cafe in the rock. Of course, there is no need to count on a special variety here, but you will be treated to hot lacamas (special square donuts) prepared on an open fire.

Here you can buy sea buckthorn and pine jam. 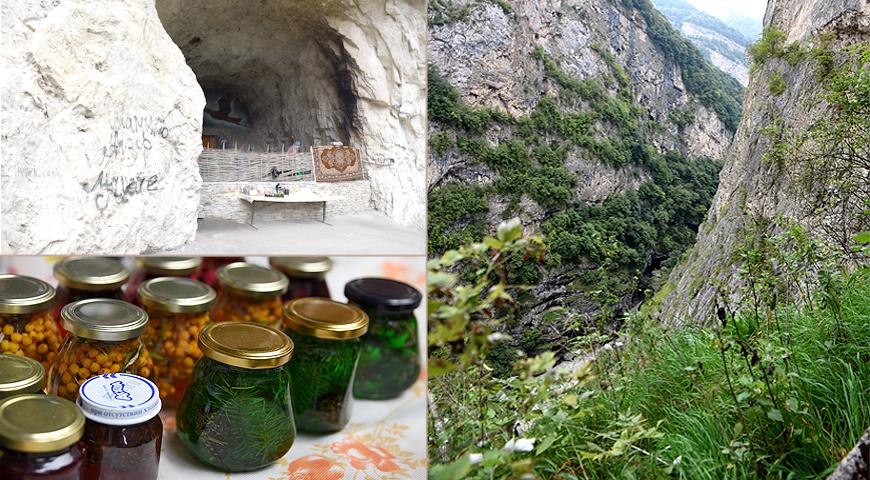 The State Nature Reserve was established in January 1976. The total area of ​​more than 80 thousand hectares.

And here it is necessary to go smoothly to the question of what to try in Kabardino-Balkaria, since it is in the reserve that you have a unique chance to taste yak meat! Cook it on the fire for at least 5 hours.

Do not deny yourself the pleasure and try more and broth, it is also extremely tasty.

In the reserve, also try fish from a mountain lake (for a little money, you can catch it yourself), and taste a roast roast on a spit.

According to locals, "the most delicious ram is one that has never tasted even a handful of hay". 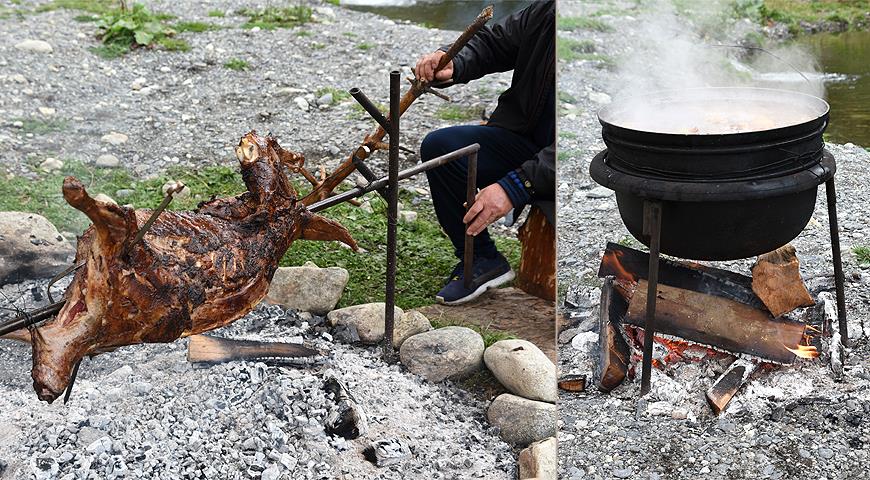 Of course, descending from the mountains, be sure to visit the local market.

There you will find not only delicious fruits and vegetables, but also traditional local cheeses.

For many centuries, the locals prepared them according to the recipes of their ancestors, practically without changing the recipe. 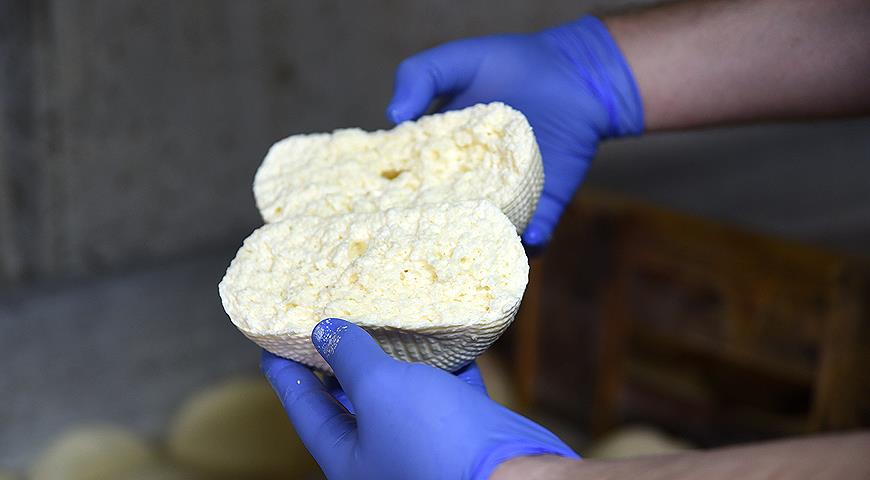 In Kabardino-Balkaria, it is simply impossible to pass Khichinov (Khichinov). They welcome dear guests, even if you just stopped by a minute to say hello to a friend’s house.

You will be offered khichins and fresh ayran. Moreover, each family has its own secret in their preparation. Previously, a girl who did not know how to cook khichins simply had no chance of getting married!

Now it’s much easier and you can buy it almost everywhere. 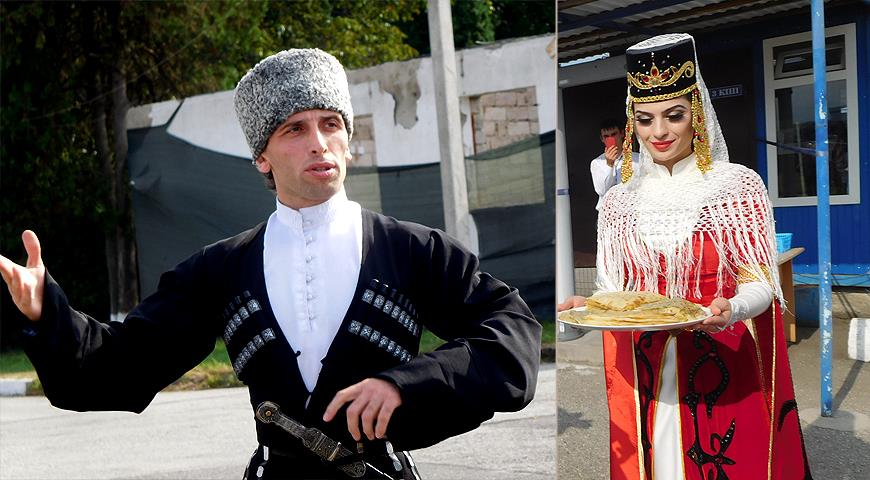 In this beauty, against the backdrop of mountains, lakes and waterfalls in early September, an unusual gastroquest, organized by the trademark "Tomatoes"in which four teams participated.

Each team received the task to prepare a dish of local products. 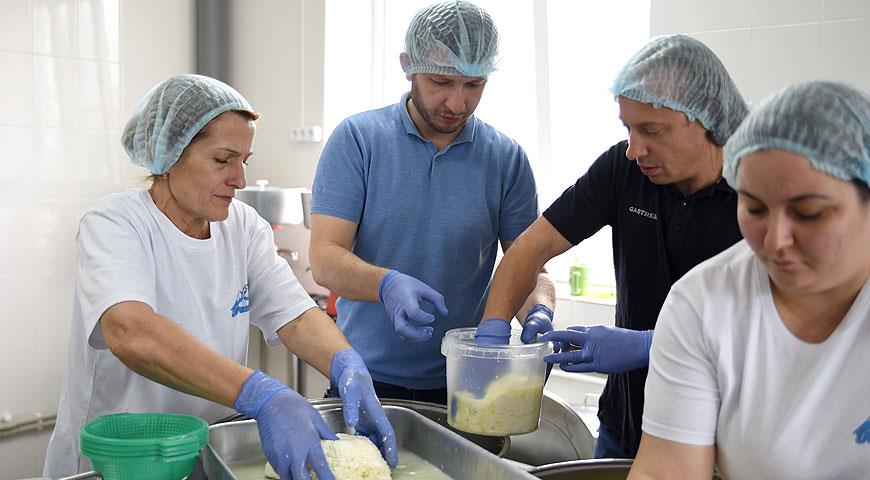 Also, as part of the culinary adventure, the guests took part in a tour of the factory of Agro-Invest LLC for the production of tomato paste, lecho and other TM products. "Tomatoes". 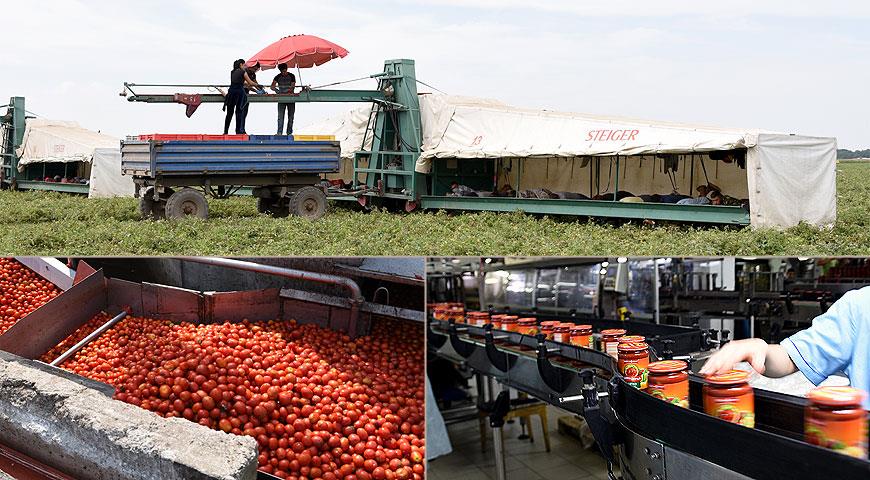 At the end of the trip, the teams prepared their own dishes: appetizer with three types of tomatoes, yak soup, trout and dessert with Balkar cream.

Created by team members copyright recipes will be included in the illustrated cookbook, which will be released in late autumn.

Come and you Kabardino-Balkaria, try local products, admire the beautiful views and come up with your Caucasian recipe dishes.