It is not easy to peel it: a rather thick upper layer is cut off with a knife, so it is better to peel off the skin with a housekeeper knife, just as we clean new potatoes. 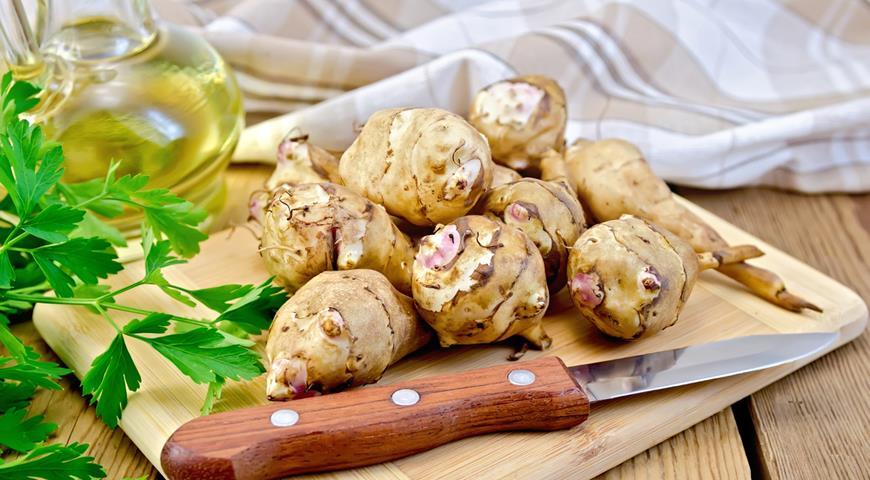 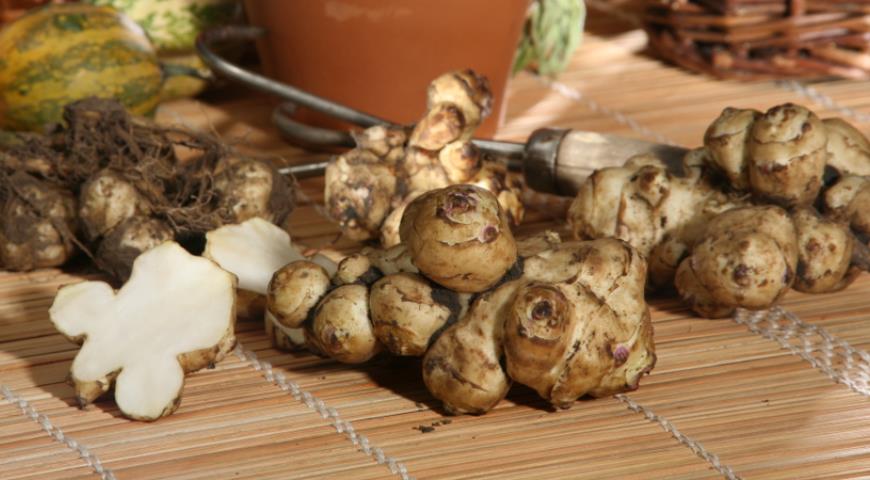 The first European countries to meet this vegetable in 1610 were the British, and then the French, who gave the root crop its current name.

It is not easy to clean it: a rather thick upper layer is cut with a knife, so it is better to peel off the skin with a housekeeper knife, just as we clean new potatoes, or blanch the root vegetable in the pan beforehand.

Jerusalem artichoke is a very useful root vegetable. It contains a lot of vitamins and microelements (potassium, zinc, iron, silicon), and, moreover, the tubers contain a vegetable analogue of insulin — the polysaccharide inulin (and quite a lot, up to 17%), which is very useful for people with diabetes mellitus: lowers blood sugar levels.

Until recently, buying a Jerusalem artichoke in Russia was very difficult, only occasionally it appeared on the shelves of Moscow markets.

Now Jerusalem artichoke is sold both in the markets and in large supermarkets, but in the latter it is quite expensive.

In the world there are more than 300 varieties and hybrids of Jerusalem artichoke.

Some are distinguished by a large crop of tubers, others by the green mass (with small tubers), others by a special decorative effect, the fourth by the early season of ripening, and so on.

Two varieties of Jerusalem artichoke are mainly cultivated industrially in Russia: ripening in September Early on and by November — Interest.

In culinary terms, different varieties of Jerusalem artichoke are not very different from each other.

By crossing topinambur with sunflower, Russian breeders in the 1940s created a new plant — topin sunflower.

The tubers of this variety are large, oval, with a smooth surface, and the harvest is very large; however, they are mainly used as feedstuffs.

Jerusalem artichoke can be eaten raw, rubbed it into a salad, you can make it a cream soup or mashed potatoes as a side dish.

One of the traditional recipes was invented by the British: they peel the fruit, cut it into quarters, blanch, stew for half an hour under the lid in butter, add cream (or bechamel sauce), stew for another ten minutes and serve, sprinkled with tarragon and chervil as a side dish (often just to veal).

Topinamer is boiled in wine, especially in France and Holland.

There are other exquisite options for the use of Jerusalem artichoke, such as multi-layer casseroles with foie gras and truffles.

The earliest varieties of Jerusalem artichoke produce crops in September, late — in November.

Jerusalem artichoke well preserved under the snow, so that the crop is removed in the spring, in March-April.

When choosing a Jerusalem artichoke in stores, you should first of all pay attention to its skin. If you take a tuber in your hand and feel that it is soft and sluggish, it means that it does not suit you.

If the skin has a shriveled appearance and stains appear on it, then this fruit is of poor quality.

If on the surface of the Jerusalem artichoke you find all sorts of roughness and growths, then this is quite normal.

WITH long-term storage tubers of Jerusalem artichoke affairs are much worse than with potatoes and beets, which in the right conditions successfully lie until the new harvest. Jerusalem artichoke in the cellar is stored for about a month. After that, it fades, or starts to rot.

The problem is that the skin of the tubers is very thin and devoid of the cork layer, therefore it cannot withstand drying and is easily damaged.

It is possible to save the tubers longer, sprinkling them with wet earth or sand, but this event already complicates matters greatly.

A small amount of Jerusalem artichoke can be in a few weeks Keep refrigerated and even in the freezer, better in the food paper bag.

This soup turned out like a good wine — its tastes "are revealed" not immediately, but in turn: in each. 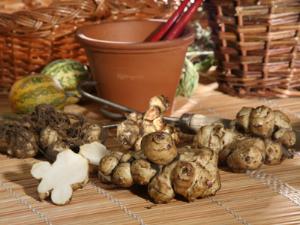 We continue the cycle of stories about the so-called “Russian poor” — products that are easy to grow,. 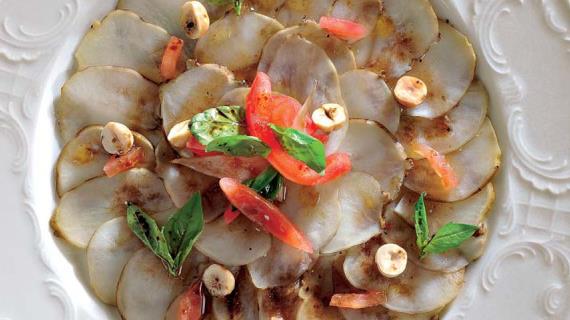