Главная » Cooking » How to paint eggs, paint for eggs, dyes for eggs

How to paint eggs, paint for eggs, dyes for eggs

Before Happy easter special eggs dyes appear on the market — powders, liquids and even gel pencils for eggs. And everything is good, but they say that after such a make-up the egg moves from the category “food” to the category “souvenirs”.

Let’s see what are paints and dyes for eggs — and whether it is possible to use them. 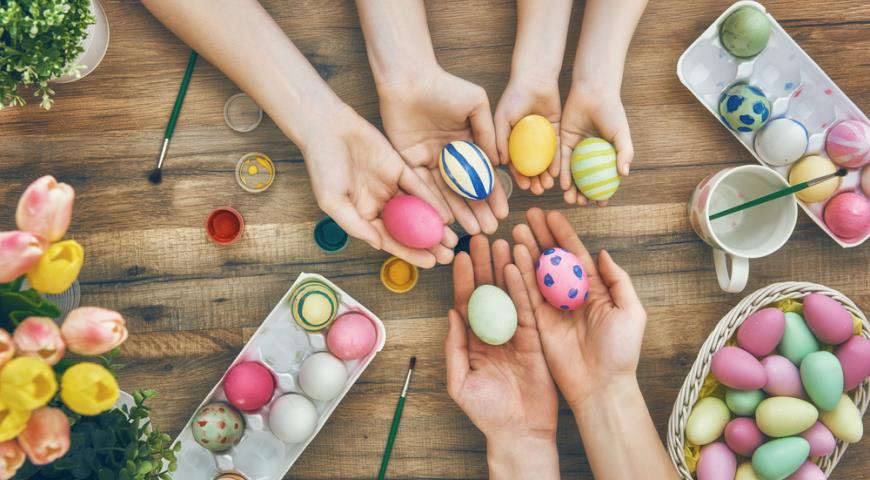 Three or four eggs, we will certainly make traditionally brown-red — in memory of the shed Blood of Christ. But cooking in onion peel two dozen, you see, is boring!

In the yellow color, eggs are recommended to be painted with saffron, and it needs a lot. In the green — a huge amount of spinach.

Other ideas also require abnormal costs of funds or time.

Just get a grasp: a glass of coffee, a peel of 2 kg of oranges, a glass of raw beet juice … Purchased dyes solve the problem once or twice.

«Easter set», «Krashenka«, «Magic shine«, «Decorate» — names do not count, the price is cheap, almost no time is required. Another manufacturer will indicate on the package the chemical composition, including the various «E». And the majority writes simply: food coloring.

Sometimes sugar or salt is added to it. But do not let your guard down!

In this way, it is possible to reduce the concentration of the paint, but to make it edible is not.

Let’s get acquainted closer with «E-shkami» which are usually used in Easter paints.

E100 (curcumin) and E140 (chlorophyll) — supplements that give red and turquoise, respectively, are harmless and in the full sense of the word food.

But this is only a spoon of honey in a barrel of tar.

Red color give different shades E122, E124 and E128. E122 (azorubine or carmoisin) is an azo dye used in Russia, but prohibited in some countries.

People who are sensitive to aspirin should avoid it. E124 in our food industry can not be used.

As well as E128, recognized by the European Commission as hazardous to health due to its carcinogenic aniline.

Yellow dye E102 — tartrazine — has a stained reputation both in Russia and in other countries.

For the same feats capable and E133, «Blue shiny FCF».

Green Supplement E142, banned in Canada, Norway and Japan, it can, by direct contact, cause severe allergies.

For the sake of fairness, it must be said that “cold” organic dyes are mentioned on the Internet, seemingly harmless.

But in the shops and church benches no one heard of them.

The main troubles that synthetic food colors can introduce us are:

So, is it worth dyeing eggs with synthetic dyes or not?

It seems that all prohibitions relate precisely to food — and the shell is not food! Well, the egg has burst, well, the squirrel has become blue or green under the crack — so we throw it away.

And the rest can be in food. but through the shell and the film inside the egg can easily penetrate any synthetic evil.

Even if the protein remains white, it does not guarantee the absence of any benzoate, sulfite or nitrite.

It turns out that eating such eggs is not safe. Throw away?

Why not, we are in the garbage can of an old Christmas tree. But a sanctified egg can be thrown away by an atheist.

If, as a result of the traditional Easter exchange, it falls to a believer, he will eat the shrine along with all the “stuffing”, and it will remain on your conscience.

For ourselves, we draw the following conclusion: one can reasonably combine natural dyes, purchased safe and even harmful synthetic ones, but the latter are only for beauty! And you need to try to track the fate of every unreliable egg. Do not give the child.

Do not give allergies.

And, perhaps, not to consecrate in the company of onion and saffron counterparts.

Draw a pattern on a boiled egg with a wax pencil and boil (hold) in the dyeing solution according to the instructions.

The pattern will remain white.

Roll the wet egg in a mixture of crushed onion (golden and red) and garlic peels. Firmly tie in a gauze flap or broken tights and cook in blue (green) dye.

The shell will become marble.

You can roll the egg in rice and tie with gauze or wrap clerical gum (no longer necessary to tie).

After boiling in the dye under the drawings and rubber bands, white specks and stripes will remain.

Beat raw egg white in thick foam, put in a cone from a quarter of a milk bag, tie tightly and cut off the tip.

Draw patterns like cream on the cake: you can paint the white color on the colored shell, or you can tint the protein and put it on a white egg — also beautiful.

2019-01-28
admin
Предыдущий Alexander Litvin: how to become happier and change your life
Следующий The best New Year rituals: attract money, love and luck in the year of the Yellow Dog