Hops-suneli and other Georgian spices 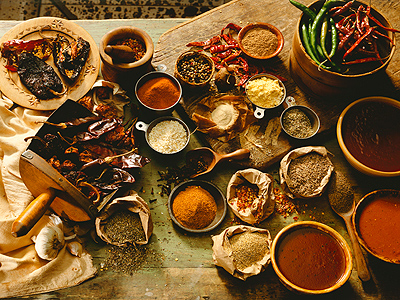 And what I want. I want to cook kharcho — in the recipe it is written in black and white: “Put hops suneli«. Kinzu, tarragon, Reyhan — I know, tsitsaku (hot peppers), kondari (savory) — I know what it is hops?

The explanation of this term took a good half an hour.

Disappoint: no relation to the hop and hop hops does not have, and means «dry.» In the bag that the seller took out, there was just a set of dried and chopped herbs and spices, without which it is impossible to cook kharcho, cook adjika, make satsivi, concoct peanut bazhe sauce and even… fry the right chicken tobacco, which is actually «tapak». Classically, such a set includes coriander, fenugreek, dill, bay leaf, basil, savory, celery, marjoram and other spices.

Naturally, the latter — “other spices” — completely kills every immutable composition of the set, since they usually make it on a whim or as a “grandmother taught”. There is an Imeretin saffron on hand — why not sypanut? What is bad mint?

There also … Well, they don’t like uniformity in Georgia, but love creativity, because GOST hops suneli no and never was.

Now about the application.

Phrases like “norm of laying suneli 0.2 g” always put me in a stupor … Why weigh so much and how to weigh it, if about 7 grams are included in a teaspoon? Indisputable hops suneli it smells nice, but its powerful aroma can clog the smell of other components of the dish. Therefore, you should not abuse the seasoning — in any quantity (reasonable) it is appropriate only in Kharcho and adjika.

And here, for example, in satsivi and lobio hops suneli they put it only because of their universality — the purists resent and insist on utsho-suneli.

New word — ucho-suneli… I learned about this spice when my Tbilisi friend was cooking lobio and pouring a pinch of nice gray-green powder there. It turns out that Georgians were separated from all their suneli blue fenugreek, calling it a “stranger” — “utsho”, most likely because they became acquainted with this typically Indian spice relatively recently.

Here everything is not easy. Blue fenugreek is found in the Caucasus as a weed plant, but is often bred as a spice.

What today is a packaged utsho-suneli, known only to God and botanists.

In Georgia, this is probably the first species, in the foreign variants — the second (we will not be boring: they are similar in taste and aroma).

Why did the Georgians decide that cilantro, reyhan, tarragon are relatives suneli, and the fenugreek growing under their feet is a stranger, ucho-suneli, unclear. But someone else’s is a stranger, and now — one of the main seasonings in Georgia, because it gives the dishes a nutty flavor, so beloved in this country.

Keep in mind that the finished powder sometimes bitter, it is better to use freshly ground seeds. However, many Georgian cooks do not like problems, and if ucho-suneli not at hand turned out in satsivi hops suneli. In this spicy blend fenugreek comes in a decent proportion.

So nutty taste is still guaranteed.

2019-09-16
admin
Предыдущий Bread traditions of different countries
Следующий Hoi An — what to see, what to try