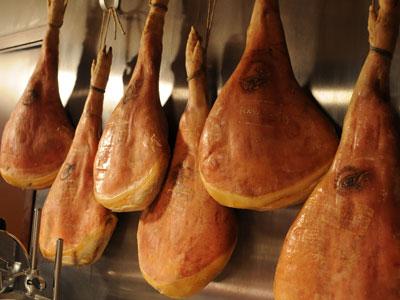 Various recipes for cooking dried meat, in particular, pork ham, can be found in the kitchens of almost all nations of the world (of course, with the exception of those who do not use meat at all). But only a few of the products obtained in this way managed to gain world fame.

And one of them is jamon.

The authentic jamon is not only a special method of salting pork, but also special breeds of pigs, as well as special methods of fattening, the conditions for which have developed in the unique ecosystem of some regions of Spain.

There is not much grass on mountain pastures, in groves of cork oaks, but acorns rich in oleic acids are abundant. And the acorns of the Spanish cork oaks are much sweeter than the Russian ones.

And so that the pigs do not spoil the roots of these noble trees, they are pierced by the little ones: thanks to this “piercer”, it becomes very difficult to dig the earth.

Best jamon — iberico (Iberico, he — Pata negra, “Black leg”) — is made from the meat of black Iberian pigs, which were fattened according to special diets: exclusively acorn — bayot (Bellota) or combining acorns with fodder — resebo (Recebo). Black pigs even have black claws — hence Pata negra.

Such a product is delivered to the court of the king of Spain. Spaniards export it, unfortunately, reluctantly.

They prefer to eat themselves.

In addition to the jamon itself (ham, back leg) there is also jamon delantero (Delantero), the same pallet (Paleta), that is, the front foot.

And the scapula, treated similarly to jamon, is called lomo.

As for the elite wines, for the high-quality hams it is important to have “origin”: they also have a “name controlled by origin”, in this case — Denominacion de Origen.

This is a kind of quality mark, ensuring that the jamon is produced in a particular province according to local standards. O must be indicated on the tag of the finished jamon: Jamon de Huelva, Jamon de Teruel, Jamon de Trevelez, Cecina de Leon, Dehesa de Extremadura, Guijuelo…

Such a tag with a label is on every ham.

And just as the wine label indicates the area, vineyard, vintage, the jamon tag contains information about the province, pasture, as well as the pig number, weight of the leg before salting, the date of the salting process, the timing of laying in the camera, the duration of exposure .

A pig, which is to become a high-quality jamon, must have at least 75% of black Iberian blood. Fattening it up on a special diet, so that by the time of slaughter, she is gaining a strictly defined weight.

And it lives very freely: no more than fifteen animals are released per hectare.

Pigs that meet all of the above requirements are slaughtered until March 31, and the rest will never be a superhamon.

Cutting carcasses for ham and other parts, which then go to the sausage, requires the skill of the sculptor. Ham should get "historical" V-shaped.

It will surely leave a shred of wool on it — this is a kind of quality mark, evidence of the authenticity of the black Iberian pig ham.

Another sign, as we have said, is the black hoof.

While the fresh ham becomes jamon, will pass long months. First of all, it should be properly salted. To do this, the old-fashioned layers of meat sprinkled with layers of salt.

How much time it takes will depend on the weight of the leg: it used to take two days for each kilogram, now it is one, therefore modern ham is less salty (this is perhaps the only deviation from ancient traditions). Then the salt is washed off, and after a couple of days, the future hams are transferred to a room with a temperature of 3–6 ° C and high humidity — the meat becomes less moist and spills evenly.

In the next chamber, the ham is already drying — the temperature there is gradually increased, and the humidity is lowered.

Finally, the most crucial period comes — ripening. It is at this time that jamon acquires a unique taste and aroma. In special cellars, hamons, like good wines, are waiting in the wings.

How much hamon is destined to ripen depends not only on his weight, but also on his diet: "mass" the product matures in about half a year, high quality "acorn" copies — and a year and a half (but it happens that more than three years).

Interestingly, two ham from the meat of one pig, oddly enough it sounds, can have different densities and tastes — it also depends on which side the pig usually lay.

From the side where it lay more often, it is drier.

"At the exit" Jamon looks like he is even sorry. The Spaniards themselves like to hang hamons in their kitchens.

And in the traditional Spanish hamonerii (this is both a restaurant, a wine room and a deli), pork ham is the basis of the menu and an integral part of the interior.

Hamon does not remain an ornament for long — they eat it all the same, because it was for this reason that they cooked it.

Eating is preceded by cutting. This is a whole ritual — spectacular and very difficult. Owning this art is called cortadors.

Ham are cut on a special wooden stand — hamoner.

This is a unique presentation: demonstration of the quality of ham and mastery of the cortador

The gun of a cortador is special knives with a long thin blade and a short hard blade.

The leg is placed hoof up on Hamonera and "open up" with a knife with a short blade, he slits the skin to himself and removes the skin and fat until the meat appears.

Then jamon cut with a long knife into thin, almost transparent slices, no longer than 6-7 cm, with a small strip of fat on the edges.

Where the ham is no longer thin, a short knife will again be needed — the remaining meat and bone will be useful for hot dishes, broths and soups.

It is easy to keep the ham at home (even if it has already begun to be cut): it can be hung from the ceiling in the kitchen, and it will last up to one and a half years (the spatula is up to a year), giving your house a Spanish touch.

In Spain, jamon is not even an object of worship, but a matter of course.

The biggest sales are before all secular and religious holidays — from Christmas to Valentine’s Day.

And in the periods between holidays, Spaniards with no less eagerness buy pallets and lomo.

It is very good with vegetables — eggplants, tomatoes, zucchini, cauliflower, green beans, as well as with fried potatoes and pasta.

From the drinks to the ham served dry red wine, sherry, beer (preferably, of course, Spanish).

Hamon is a tender creature: its slices literally melt in the mouth.

Therefore, if you want to add it to the hot, you need to do it at the very last moment — so that the slightly melted fat gives the dish a unique salty taste.