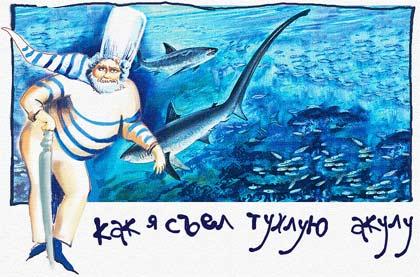 To meet such under water is hardly pleasant if you are not Makarevich.

But I met sharks in the kitchen. Marinate slices in lime juice with garlic, salt and pepper for three or four hours. Slicing onions tomatoes and tiny chili pepper, You put shark pieces on them in a deep frying pan — and stew them under the lid, at the end adding parsley. Suitable accompaniment — rice.

If the shark is the freshest, just fry the steaks like from tuna or sword-fish, sprinkled with the same lime.

For the fish they set off towards Greenland, discovered more than a thousand years ago by Erik Ginger, the father of Leif Eiriksson, the first European who reached the American coast in 1000, half a millennium before Columbus.

This is a reference point in time — to understand how long Icelanders eat the Greenland shark.

It is larger than three times a katran: here and Makarevich will tremble.

The narrow peninsula Snefelsness stretched for a hundred kilometers to the Atlantic Ocean.

From Reykjavik to the base of the peninsula, 170 kilometers to the north-north-west.

The main attraction that placed Iceland on the map of the world mass culture as far back as 1864 is the snowy peak Snefelsoykül, with which the heroes of Jules Verne’s Journey to the Center of the Earth began their adventure.

But here and winding, almost Norwegian fjords, and indented coastal cliffs covered with bird bazaars and wide golden beaches are rare for Iceland, where black volcanic sand dominates. On the northern coast of the peninsula is the fishing village of Bjarnarhöfn.

There, in the squat house of the Hildibrandson couple, I tried for the first time the famous Icelandic rotten shark — hacarles (hakarl): delicacy or horror story, to whom that.

Of course, I ate and other edible joys of Iceland. And herring in different sauces — wine, garlic, mustard, curry, etc.

And lamb, which will never be called just like that, but certainly "Icelandic lamb" — there’s like Icelandic and there’s everything else in the world.

And the red-billed bird puffin.

And the whale, which is not correct, but Brigitte Bardot will not know about it. And a perverted gourmet dish — cod chins.

But the shark was still more exotic than all.

Greenland, the northernmost of all sharks, is inedible fresh as it contains a special acid that reduces the salinity of the water in its shark body to an acceptable one.

The Icelanders still learned to eat it, but this can be done about nine months after the capture.

Cut into pieces cannibal fish put in a box, and it goes dead underground or just in the cellar for about three months, that is, culturally speaking, it undergoes natural fermentation.

And when all slags go outside, another six months hangs under the eaves in the barn — and suddenly, like a frog princess, it becomes a delicacy. In any case, in the central restaurant of Reykjavik “Vid Tjornina” I was offered several small pieces of hakarl and herring with a glass of gratinnevin for $ 28.

With the air of a connoisseur, I waved my hand away: they said, we ate more heavily in places.

In Bjarnarhöfn, removing shark ham from the hook, Gudyon Hildybrandson cut off small pieces of a centimeter and a half. Taste and smell — unprecedented: sharp, sharp, noticeably giving away ammonia.

Gudyon immediately brought a glass Brannevin — local vodka from potatoes with the addition of cumin: a combination of booze and snacks, proven for centuries.

Slightly disturbed the table harmony of dried sundries hanging from shark stomachs hanging on the wall of the room: the remains of birds, where did they come from metal parts, the paw of a polar bear.

True, I did not notice the human fragments.

The atmosphere during the meal is an important thing, I will note it thoughtfully. Once in Thailand, I ate crocodile soup at a crocodile farm: it turns out that if you look at thousands of crawling and grunting reptiles, the dish of them loses its taste.

True, under a glass, everything goes easier.

Of course, I ate and other edible joys of Iceland.
And herring in different sauces — wine, garlic, mustard, curry, etc.
And lamb, which will never be called just like that, but certainly "Icelandic lamb" — there’s like Icelandic and there’s everything else in the world.

And the red-billed puffin bird.

And the whale, which is not correct, but Bridget Bardot will not know about it.
And a perversely exquisite dish — cod chins.