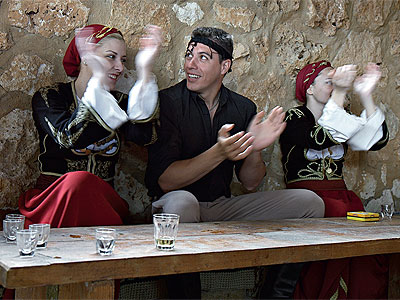 The warm winds blowing from the Sahara, together with the cool freshness of the mountains and the purity of the sea, allow the island Crete fully provide themselves with the necessary food all year round.

Here, all products — from the simplest to delicacies — locally produced.

Not long using the benefits of civilization in the form of pesticides and nitrates, the Cretans returned to the original organic farming and animal husbandry.

Located near the city Rethymnon farm Agreco This process began one of the first, which its owners are very proud of. This whole farm, settled on a mountainside with a fantastic view of the sea, from beginning to end — about food.

And if you come there on an excursion — and this is what Agreco different from other farms, there you can and should go on an excursion — no matter what you do, whatever farm activity you take, you will certainly be taken to the estate — a replica of a 17th century house and fed to the dump with a hundred snacks and a lamb roasted around the fire .

And they will give to drink.

With winemaking on a farm, everything is true, just like in a grandmother’s (or rather grandfather’s) fairy tale.

First you are given a basket and sent to collect grapes.

Later in the evening, when all the grapes are harvested and dumped into a large stone «pool», collectors — including you — carefully wash their feet and jump inwards to turn the juicy berries into an oddly fragrant mush — the basis of the future wine — with jokes and jokes.

From the grape cake by careful distillation according to the old method, they will make a strong cycudite — the Cretan version of the brandy. The moonshine still stands right there in the lower courtyard of the main house of the farm, and it works almost continuously, producing a hot drink in a thin stream.

One sip — especially effective after working in the fresh air — and all the worries are somewhere not at all with you. Temporarily, of course, but still nice.

And a special color appears in the national dances, in which, after the third sip, you will certainly take part.

He is baked at the farm exactly this day — every day. Traditional Cretan bread made from barley flour is either eaten immediately from the oven — hot, or cut into chunks and turned into paximi bread crumbs (double-baked). With grain, as well as with the production of butter: there is basically a working water mill on the farm — you can start it, grind grain, grind it and bake the resulting flour.

Why, there, they will also give you a sickle in your hands, so that you will collect the ears of wheat … Sourdough bread is made, without yeast.

Sourdough lives in its trough, every day it is half-renewed, and in the morning the hostesses start dough and make long loaves of it, lovingly put them on a floured white cloth, cut them into chunks and allow them to stand. And then, on a shovel, as expected, they are sent to a prepared hot oven, which is located right there, near the house.

Preparing the oven is a big deal.

The main thing here is Alexis, who actually controls the farm: he is greeted by the guests, accompanied by wine, and the wine is made, and the furnace is kindled.

Then the still-burning coals shift into a smaller stove so as not to cool.

After that, a large oven washes away soot with a special rag on a stick and throws it at a handful of flour.

So, if the flour quickly burned, Alexis washes and cools the oven further, otherwise the bread will burn in the same way. If the flour does not roast for a long time, it shifts the coals back so that the oven warms up better and takes it out again and washes it again.

And only then the women put the distance bread into the oven.

A traditional Cretan dakos snack is made from breadcrumbs — a mixture of chopped tomatoes with feta, olive oil and oregano is placed on moistened crackers.

How much on Crete delicious cheeses!

An engraver, antotyros, feta, tender mizitra … To get this last fresh cheese, goat or sheep milk is brought to the boil. Remove it from heat, pour in lemon juice and mix gently — until the curd cheese separates.

It is taken out with a small sieve, slightly squeezed, salted. Now with it you can cook, for example, casserole-bureks, from layers of thinly chopped young potatoes and zucchini.

Or mix with yolks, honey, zest and cinnamon and fill the tart-panes from yeast dough in olive oil.

Or wrap the cheese in slices of the finest puff pastry to make divine myzitrapitakia patties. But pies can be with greens!

The famous Cretan diet, in addition to dairy products, whole grains and lamb, includes an incredible amount of greenery — including wild. Every day to the kitchen Agreco bring literally a bag of herbs.

The most understandable to us is spinach, sorrel and fennel. The rest of the species (purslane, wild leek, wild asparagus and the mysterious stamenagafi of the chicory genus) can only be surprised.

Greens will be sorted out, coarsely chopped, boiled in their own juice and served, watering with olive oil and lemon juice.

Special pride Agreco — own olive oil. Olive trees on the farm planted every free corner, and some of them are very old. The oil is produced with the help of modern presses for all the necessary technologies.

But there is a functioning old oil mill on the farm.

And if you arrive at Crete in the season of picking olives, you can easily participate in the process.

You will enter a small building and you will see a huge vat, inside which are surrounded by heavy stone ridges.

They are set in motion by wooden levers, and the levers themselves — by a donkey (he is blindfolded so as not to feel dizzy from walking in a circle) and by people, that is, by you.

Ripe olives, collected by you, will be poured into the vat, they will pour in some well water — and go to work: walk in a circle, roll stones. The paste crushed by heavy rollers from olives will be put into bags of coarse fibers and put them one by one under a hand press. The press will press down the bags, and pure olive juice, oil mixed with water, will flow into a special container.

The water will sink to the bottom of the tank, it will be released, and the oil — “liquid gold of Crete” — will be kept and bottled, one of which you can take with you. By the way, the donkey, though the only working, but generally not at all lonely resident of the farm.

There are there turkeys, rabbits, lambs, as well as the rarest deer and mountain goats Kri-kri with horns the length of which is your leg.