Главная » Cooking » Dough for pies and pies, yeast and yeast-free

Dough for pies and pies, yeast and yeast-free

Dough for pies and pies, yeast and yeast-free 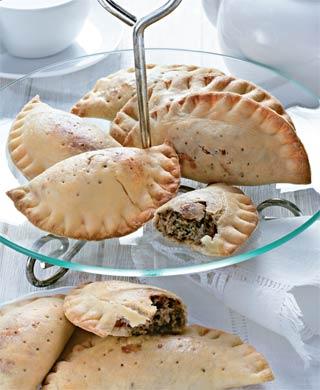 A classic right — what only pies and pies are not in Russian cuisine!

Open, closed, trellised, round, three-quadrangular, low and high, with one type of minced meat and multi-layered, wedding curtains, decorated with dough figures, pie, pie, cheesecakes, hearth (baked in a Russian oven) and spun (fried) … You can enumerate endlessly, especially the majority of Russian terms related to baking, alas, almost forgotten.

For example, “vekoshniki” have sunk into eternity — pies filled with meat and fish leftovers (vekoshju), which are advised to serve “Domostroy” in the middle of the 16th century.

Or, who today will remember the “tack” — Tver and Pskov porridge pie, on top of which thin slices of salted red fish were put.

Its name comes from a special filling called a scoop — that is, loose crumb, as if pulled together by fish layers.

The “naivashnik” is practically forgotten — a fried triangular pie made of hard dough mixed in vegetable oil with a filling (only in one corner!) Made of cheese, eggs or jam.

Especially loved such pies were in the Middle and Lower Volga. Let’s remember the kind word and “borkannik” (from the regional “borkan” — carrot) — rye pie with carrots and hard-boiled eggs, common in the Pskov, Novgorod and Kalinin regions.

Imagine — a viburnum pie, where the berry was not put in the filling, but (pre-dried) was ground into powder, brewed with boiling water in a mash-mashed potatoes, which were mixed with rye flour, but sugar was not put.

This cake was baked in the form of a thick cake without a filling.

It is said that this, one of the oldest Russian pies, is still preserved in the Kaluga region and in the south of Smolensk.

Talking about pies, as well as cooking them, of course, follows from the test.

It is usually divided into two types — yeast (sour) and yeast-free (fresh).

Favorite dough in Russia has always been yeast. For its preparation, the flour is sieved, the yeast is dissolved in a small amount of warm (25–30 ° C) water per 1 kg of flour from 15 to 40 g of pressed yeast (depending on the amount of fat and sugar in the dough).

Such dough can be made in two ways: sponge and straight.

First, prepare the brew (batter) — diluted yeast is poured into preheated milk or water, pour a third of the flour and allowed to wander in a warm place for an hour. When the sponge rises and bubbles appear on it, they add all the baking to the dough, stir well, add the remaining flour and knead until the dough is homogeneous and does not cease to stick to the hands and walls of the dish.

The dough is again put in 2 hours in a warm place.

As the dough rises, it is crushed once or twice.

For a straight dough, all the flour (as opposed to sponge cake!) Is kneaded with water or milk, yeast and other products at the same time. The yeast is put in one and a half times more than the sponge one, since the yeast immediately gets into the thick dough, which slows down the fermentation process (in total, it lasts about 4 hours). During this time, the dough is crushed, like a sponge, twice.

The straight-through method is especially good for thinner and not very rich dough intended for fritters, pancakes, fried pies, etc.

If the finished dough is not cut immediately, then after pounding it should be closed with a lid and stored in a cold place.

The more muffins are put into the dough, the more yeast should be put into it, as the fat retards the development of yeast fungi.

When increasing the number of eggs and butter should reduce the rate of water and milk.