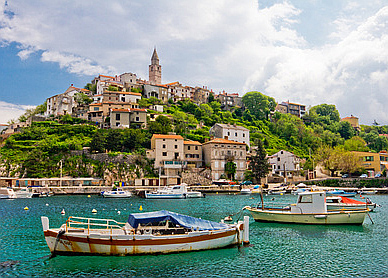 And although in the kitchen of this beautiful country you will find dishes that will remind you of Italy, Austria, Germany, Hungary or Turkey, the Mediterranean and Balkan traditions, the Croats creatively rethought their recipes.

Tasty and diverse — travelers say so, returning from Istria, Dalmatia and other Croatian areas, not forgetting to add pro extraordinary cordiality and hospitality of the hosts.

For European, and especially for Russian, territory Croatia It is small, but its land is generous and fertile.

Vacationers, as a rule, are limited to visiting the seaside zone and islands and nevertheless have the opportunity to get acquainted with the entire gastronomic richness of forests, fields and vineyards, sea and river expanses.

Of course, for us the main temptation is fish. AT Adriatic her up 350 species. And when ordering it is better to arm yourself with a dictionary (although in many places there is a menu in Russian), because one fish may have several names — depending on the region.

AT Croatia they say that the fish swims three times: in water, olive oil and white wine.

According to this proverb, it is not difficult to guess how the fish are cooked most often: they are baked on a lattice, sprinkled with olive oil and washed down with cool wine.

In this form are good and dorada, and simple mackerel (or, in the European manner, mackerel), and sardines (they can serve and salty, for a snack).

Love in Croatia and fish “lesho” — that is, boiled in water with the addition of olive oil, vegetables and spices, and brodett — a stew of different types of fish with tomatoes, garlic and onions.

Of the other traditional dishes — mussels with garlic sauce, octopus salad, which here has a funny name — hobotnitsa, and, of course, the most tender fried squids.

Do not be surprised if during the holidays to the section «meat» you will not reach. But Croats also know a lot about meat.

It is cooked with aromatic herbs, usually on a spit or on coals, and sometimes stewed with sour sheep milk or with vegetables and spices in wine (this dish has a beautiful name — pashtitsada).

By the way, with regard to spices, they are widely represented: name any of the Mediterranean cuisine — from rosemary to nutmeg — and it will definitely be in Croatian recipes.

The application is very different, even in desserts (try, for example, the Khvar paprenyaki — biscuits with sweet pepper).

But back to the meat specialties.

Perhaps the main gastronomic pride of the Croats is prshut, dried or smoked ham: pork, wild boar, deer and even bear. With thin slices of fish served in the company of sheep cheese and olives, you will be offered to start any meal.

You will also buy them as an edible souvenir, leaving hospitable Croatia.

In Croatian cuisine, vegetables occupy an honorable place. The Croats call the “Queen” wild asparagus, it is harvested in the spring.

Another vegetable aristocrat is the artichoke.

It may seem unusual combination of boiled potatoes and chard, but this is a typical side dish, and sometimes an independent dish.

But we draw your attention not to the usual forest, and truffles.

And even give the address — the city Motovun. In addition to medieval attractions and the International Film Festival, he is known for its white and black truffles.

AT Motovun and in the next with him Livade You can splurge on products with truffles (pasta, sauce, olive oil, canned food, cheese) or at least fork out for a mushroom lunch in one of the restaurants.

However, truffle products are also sold in other regions.

Croats eat a lot of bread. Sometimes just dipping it in olive oil, which is here, by the way, of excellent quality.

There are restaurants where bread and other dishes are cooked according to an old tradition — “under the pitch«, That is, under a metal or cast-iron cap, in the coals. Before going to church, the hostess covered a cauldron with meat, chicken and potatoes in coals, and the dish was stewed without supervision.

Also, bread was baked in coals — the size of a wheel and very tasty!