Cocoa — liquid drink from cocoa powder, slightly sweetened and diluted with water and milk. So, as we know it today, cocoa became in the XIX century; until that time, people drank only hot chocolate.

Both drinks owe their existence to cocoa trees: their fruits contain the so-called «cocoa beans», from which they produce both chocolate and cocoa powder. 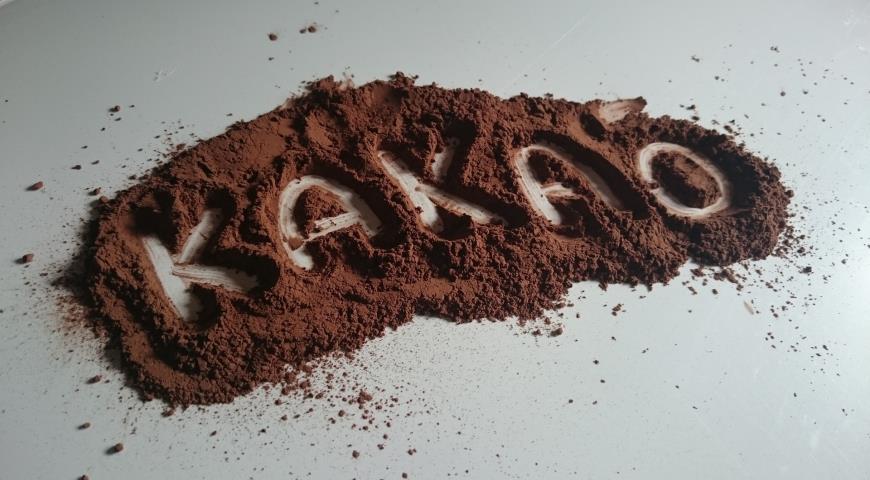 Cocoa — liquid drink from cocoa powder, slightly sweetened and diluted with water and milk. So, as we know it today, cocoa became in the XIX century; until that time, people drank only hot chocolate. Both drinks owe their existence to the cocoa trees: their fruits contain the so-called «cocoa beans».

After special treatment from cocoa beans get cocoa mass, butter and oil cake . The first two are going to make chocolate, and cocoa powder is produced from the cake.

A drink is prepared from the powder — mixed with sugar and water, whipped, and then topped up with hot milk.

Cocoa — a large tree, wild growing on the coast of Mexico, in Central and South America.

It reaches a height of 12 m, but in the crop by cutting, the height is kept within 4.5–7.6 m. The fruit, 20–38 cm long, resembles a large cucumber or an elongated pubescent melon; fully matured in four months.

Leathery in appearance, the partly lignified sheath changes its color as it matures: in one species, from red to carmine, then crimson, orange or reddish-brown; the other, from green to yellow.

The fruit contains 20-50 almond-shaped seeds (cocoa beans), immersed in a sticky liquid that freezes in the whitish flesh in the air.

For a thousand years BC, the Indians made a drink from the fruit of the cocoa tree. This is indicated by vessels with residues. theobromine, discovered in Central America.

They used the pulp of the fruit, not the beans.

The drink was considered a gift from the god Quetzalcoatl to people.

The Aztec cocoa beans served as a means of calculation.

Cocoa recipe and the beans themselves were brought from Mexico by Hernán Cortes in 1527. The Spaniards remade the recipe to their own taste — they added sugar, nutmeg, and cinnamon and began to serve the drink hot.

After 130 years, cocoa was brought to England. The drink was to their liking, and chocolate houses in England became as popular as coffee and tea houses.

It was the British who first invented adding milk to cocoa.

And they also flavored him with yolk, madera and vanilla.

The amazing ability of cocoa to improve mood and increase vitality has long been noticed by people. And when scientists paid attention to it, it turned out that biologically active substances contained in cocoa increase efficiency, stimulate mental activity, improve memory and even can help a person cope with depression by stimulating the production of the “hormone of joy” — endorphin.

In addition, unlike chocolate, cocoa cannot spoil your figure.

There are three main groups cocoa trees, although most plantations grow their mixtures. Groups differ in the number and color of beans, the structure of the fetus.

Varieties from the group cryollo the rarest — only 3% of the total cocoa.

Cocoa beans from this group are used to make the best and most expensive chocolate.

More than 80% of the world crop yield three subtypes of the group. forastero.

In terms of quality, cocoa differs by fragrant (subtle, or special, or sweet) and mass.

The first category includes Criollo, Trinitario and Grade. national, which belongs to the forastero group, it is the only one included in the first category and is grown exclusively in Ecuador.

All other varieties of the forastero group belong to the second category: it is from them that cocoa powder is produced to make cocoa drink. Cocoa beans from freshly harvested fruits are bitter.

To highlight the most complete palette of flavor and taste, beans go through a process of fermentation and drying.

The main difference between drinking chocolate and cocoa drink is that the first is prepared exclusively in milk (1 l milk per 200–250 g of slab chocolate) with the addition of vanilla, sugar, cinnamon and beat it into foam. Cocoa is boiled in water and milk.

Experts advise that you first use only water, and add hot milk later.

Sugar, of course, to taste.

For the preparation of this flavored drink from cocoa powder with sugar (or sweetener) you will need not only milk — you should arm yourself with a whisk, mixer or blender to achieve an appetizing airy foam.

Without these simple cocoa devices, of course, it will dissolve, but it will be just a brown homogeneous drink, and you will not be able to achieve a delicious foamy foam.

The best temperature for dissolving cocoa in milk is 90 ° C, so do not let it boil. The optimal fat content of milk for making beverages is 3.5%.

Categorical do not recommend cooking cocoa on water or condensed milk diluted with boiling water — it will not taste good.

There are many options: yolks pounded with sugar are added to cocoa, served cold with ice cream or whipped cream, seasoned with cinnamon, nutmeg and vanilla, cognac or Marsala is added. On the basis of cocoa prepare cocktails.

Cocoa powder is also used in the preparation of desserts and baking.