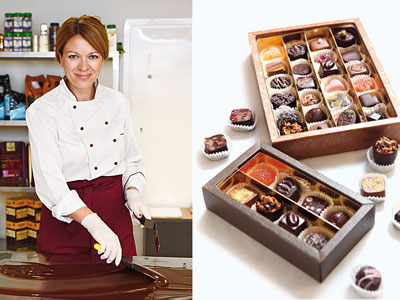 While Alla Komissarova managed finances in a large corporation, she was only one of the visitors to the pastry shops: the tiles in bright wrappers were always kept in her office, car and bag with a laptop.

After the birth of the youngest son, her relationship with chocolate rapidly changed.

It all started with the fact that the baby was allergic, and Alla began to look for a replacement for the usual sweets. In the midst of the search, a friend called her and invited to the master class a French pastry chef who taught to cook marmalade from natural fruit juices and mashed potatoes. The flavors and dyes described on the boxes with domestic marmalade, did not participate in the recipe.

French sweets did not contradict the children’s diet, and Alla began cooking marmalade at home.

Like many start-ups, Alla has been thinking about her own brand name for a long time. She even announced a contest among friends, promising the winner of a mountain of chocolate. But lucky words never occurred to anyone.

Once Alla returned home with a box of chocolates made by her during the next master class.

The six-year-old daughter pounced on sweets, instantly smearing her face and hands with chocolate.

Seeing a satisfied child, Alla said: “You’re just a little princess Shoko!”, And realized that she had thought up the name of her studio.

Pastry subtleties intrigued her seriously: Alla signed up for a couple of master classes, learned to do chocolate candies and began to organize regular practical exercises at home.

She ordered books with recipes online, watched interviews with Western chocolatiers for hours, and treated friends and acquaintances with her own sweets, which did not cause allergies in children. By this time, Alla realized that she would never return to the world of large corporations. «It is difficult at the same time to make a career and remain yourself, you have to constantly wear a mask and follow the tough rules imposed by someone. In the corporate world, there is little room for creativity.

After the birth of my third child, I realized that I would not live like this anymore.«She admits.

Idea to turn a passion to chocolate a new profession came into being two years ago: after another master class, Alla midnight explored the sites of European confectionery schools and eventually left the application for education at the largest international school Ecole Chocolate. After receiving a diploma from the courses, she, along with other graduates went to practice at the Italian chocolate workshops.

After returning to Moscow, Alla decided that she would definitely open her own chocolate atelier in Moscow, where she would manually make sweets that taste as good as European ones.

Before releasing the first batch of sweets in November 2011, she visited half a dozen master classes and the International Chocolate Salon in Paris in France, chose more than ten types of packaging in Belgium and agreed on deliveries chocolate Valrhona, Cacao Barry, DGF. 90% of ingredients (candied fruit, cream, nut paste and more) you have to order in Europe: the quality of Russian products is extremely unstable.

But it is possible to demonstrate exactly the taste game, encoded in the recipes of Belgian, Italian and French chocolatiers.

In addition to her candy create three more charming girls. Alla did not have to search for her first buyers for a long time: friends and acquaintances asked for a long time where to buy her candy, without waiting for an invitation to the next family dinner, which traditionally ended with chocolate tasting.

A couple of months after the opening of the shop, word of mouth began to work with triple strength.

As a result, last fall, Alla decided on risky investments and ordered a tempering machine in Italy, which allows you to keep in a molten state up to 25 kg of chocolate for a long time and thereby increase production: chocolate it is no longer necessary to temper manually in small portions. The presence of the machine allowed to open an online store.

In the summer, Alla will leave for France for another internship.

She promises to bring a bag of pastry ideas from there.