Fish caviar in Russia has long been considered the decoration of the table (especially valued black and white).

Back in the 19th century, it was not only salted, but also boiled in vinegar or “poppy milk” (the so-called pressed gruel of boiled poppy seeds was called that). 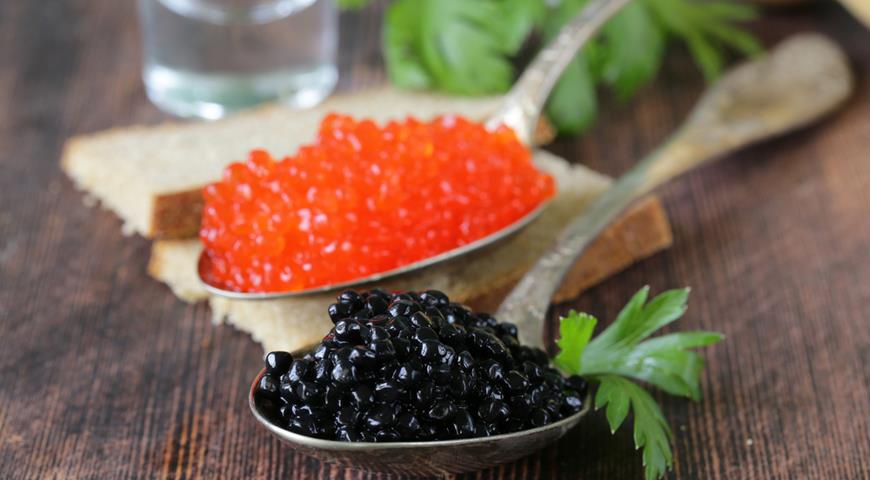 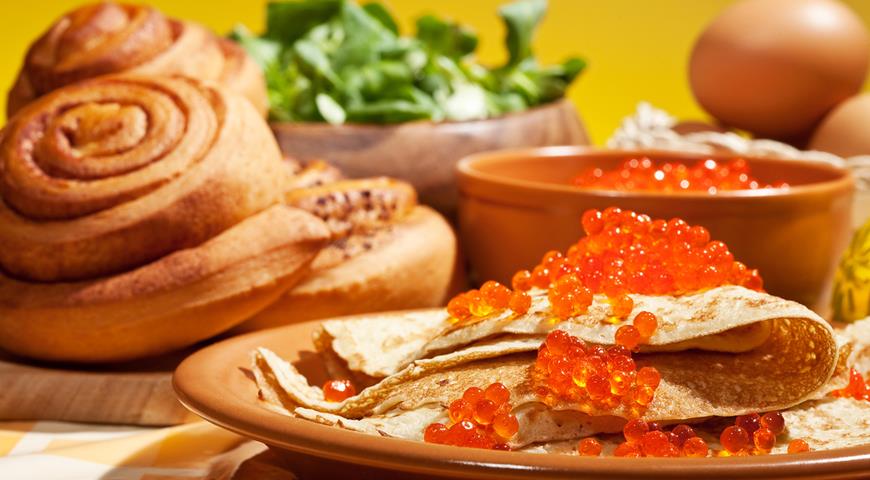 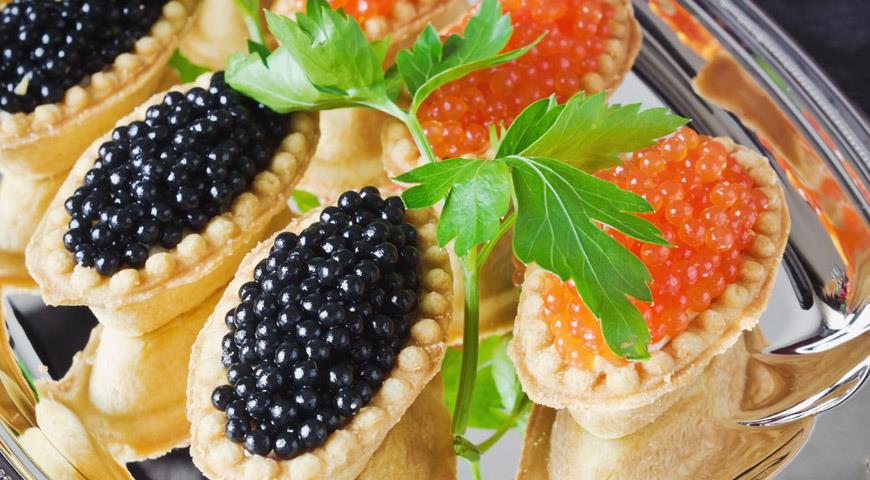 Fish caviar in Russia has long been considered the decoration of the table (especially valued black and white). As early as the 19th century, it was not only salted, but also boiled in vinegar or “poppy milk” (the so-called squeezed pulp of boiled poppy seeds was called so), steamed in clay pots, served to baked potatoes, added to fast pancakes instead of eggs, and along with fish — in a salty soup, “calla” instead of meat.

The famous English mariner James Cook, visiting a Russian settlement on the island of Unalaska in 1778, wrote: “I ate whale meat cooked by Russians, and caviar, such as dried pudding, served them instead of bread; they have very little real bread and they only enjoy themselves. ”

Caviar is valued not only for its amazing taste, it is also surprisingly useful.

There is a lot of protein in it — about 30% of proteins that are almost completely absorbed by the body (for animal proteins, this is rare). In addition, it contains a lot of useful amino acids, minerals, vitamins A, C and D, folic acid.

That is why caviar is prescribed to pregnant women, children and sick people.

Unfortunately, due to the deteriorating environment from year to year and the barbaric actions of poachers, exterminating both salmon and sturgeon, caviar is becoming less and less. There is still hope for alternative ways of producing caviar — for caviar from farms, as well as for developing new methods for extracting caviar, for example, when caviar is taken from fish without killing it.

Most often, caviar is divided into three kinds.

• Black caviar, which is obtained from sturgeon fish (beluga, sturgeon, sturgeon sturgeon, sterlet) is one of the most delicious and expensive products in the whole world.

• White caviar, obtained from whitefish, cod and herring fish (carp, carp, pike perch, pike, roach, pollock, whitefish, herring and others). This caviar is also called fish caviar: the name appeared in connection with the fishing of certain species of fish by the so-called «chastik» — a frequent small-scale net (as opposed to a large-scale net, which is harvested by sturgeon).

“White caviar” is most often not white, light pink (like pinagora caviar), light yellow (like pollock, pike or carp caviar) or even orange (like flying fish caviar).

The unifying characteristic for white caviar is, rather, its value: most often it is rather small, much smaller than red caviar and some types of black caviar.

In addition, small and light caviar in some countries adopted tint: for example, tobiko (as Japan is called the light-orange caviar of flying fish) with the help of wasabi and ink, karatey make, respectively, green and black.

The most expensive caviar in the world — «white black«More precisely sturgeon caviar.

First, the older the sturgeon or the beluga, the brighter the caviar. Secondly, rare sturgeon albino fishes spawn white caviar.

The price for a jar of “white black caviar”, obtained from sturgeon albino or beluga albino, in Iran and Arab countries can reach several tens of thousands of dollars.

• Granular caviar immediately after opening the fish, in its raw form, it is wiped through a special sieve (“rumble”) so that its grains, passing through small holes, are cleaned of films and veins.

• Pike roe not as beautiful as grainy, but tastier and longer stored.

Immediately after the fish is opened, the caviar is salted in yastyakh (fishy ovaries), then they are laid out in small bowls («splints«) And lightly dried (weathered). Only after that the eggs are released from the films and crushed by tolkushkami, why the eggs become more dense, turn into a homogeneous mass.

In taste, the best of the black caviar currently available is just pressed, although in Soviet times it was always cheaper than grainy, which was considered more “beautiful”, that is, it had the best appearance and presentation.

In fact, pressed caviar is not only the most delicious, but also the most resistant in the sense of preservation.

• Caviar It was considered a delicacy in pre-revolutionary Russia, and now it is produced very rarely.

It is rubbed through a sieve “rattle” in the same way as the granular one, dramatically poured over with a warm strong brine and dried.

Such caviar got its name thanks to the postal threes: it was on them, but as soon as possible, that caviar was sent from the Volga to the capital — to the luxurious bar table.

• Caviar caviar — the easiest to prepare: it is salted with yastika (with ovaries of fish) and likewise sold with yastika.

Red and white caviar sell as a rule grainy and in yastyakh.

It is extruded dried mullet or tuna caviar. In shape, it resembles milt: long 20-centimeter sausages of dark orange color. For the preparation of bottars, mainly mullet caviar is used, less often tuna, as it is cheaper, saltier.

Bottarga from mullet roe is much more tasty than tuna caviar totarga.

There are also several species in the world. shellfish roe, including snail caviar and cuttlefish roe.

We add that there is (and in Russian stores actively sold) synthetic or imitated caviar.

This is a surrogate product that imitates the taste and appearance of fish spawn, most of them salmon and sturgeon.

In appearance, such caviar is similar to natural, while it is not sticky at all; in fact, these are elastic balls of gelatin, with the taste of fish (at best) or margarine (at worst).

We categorically do not recommend buying such caviar: natural pollock roe costs about the same and wins against the simulated one in all respects.

Nowadays, red, white and black caviar are used in various dishes (most often, snacks) so as to preserve its natural taste as much as possible.

However, there are no rules without exceptions.

So, for example, Canadians make delicious pate from pike caviar: dab fresh caviar with boiling water, boil for 10 minutes, rub with a fork, mix with a raw egg, herbs, ground breadcrumbs and season with salt, pepper, anchovies and lemon juice.

The mass is placed in a greased and sprinkled with breadcrumbs, a layer of mashed potatoes with margarine or butter is placed on top and baked for half an hour in the oven on medium heat.

In Soviet times, caviar became the most important product of the New Year’s table (caviar sandwiches and eggs stuffed with caviar).

WITH June to October In the north-east of Russia, the catch of chum salmon, pink salmon and sockeye fish, which go to spawn in the rivers of Kamchatka and Sakhalin, is carried out Nerka starts spawning one of the first — at the end of May, which allows us to taste the first caviar of the new season at the beginning of summer.

Red caviar of the first grade consists of the eggs of the same size and color, characterized by density, friability, low salt content and a pleasant smell; Such red caviar is harvested only in August-September of the current year.

Near Caspian Sea sturgeon spawns twice a year — in spring and summer (May June) and in the fall (from August to October). A fish with ripe caviar spawns for only a few weeks.

The breeding of sturgeon on farms in time will inevitably displace the sturgeon fishery, since wild sturgeon populations are reduced. This process gradually turns black caviar into an off-season product.

On the other hand, the product is retained for a long time due to the use of preservatives (relatively harmless LIV and Vareks; the dubious preservative Borax is still used), and that is why it is available in stores all year round.

We add that in Russia there are two holidays, when caviar on the table is considered almost mandatory.

The first — Pancake week (which falls in February or March), when caviar is traditionally served with pancakes.

Second — New Year: from Soviet times, it was for the New Year’s table that they certainly bought a jar of red or black caviar.

In order not to buy a fake, follow simple rules.

When buying caviar in a can or vrazves, remember: high-quality caviar, on the one hand, does not contain liquid between the eggs, on the other hand, it should not be too dry and sticky.

If the quality of caviar is easy to determine by eye, then choosing a can, you need to know a few tricks.

When you turn over the jar, the caviar should «move» inside, as it were: if the caviar mass is motionless, it means that it is too dry.

On the lid of a can with black caviar there are two rows of numbers — the date of manufacture and the number of the master, and on the cans of red — the same plus the word “caviar” in the third row.

Attention: if the numbers are printed, more accurately squeezed from the outside, not from the inside — do not buy, this is an absolute fake.

Another important criterion is price.

A 140-gram can of red caviar cannot cost less than 200 rubles, and a 130-gram can of black can be cheaper than several thousand rubles.

There should be no sticky eggs on the inside of the lid (however, you will know this only when you open the purchased jar).

Close the opened jar very tightly, and eat the contents during the week: the caviar will not live longer. 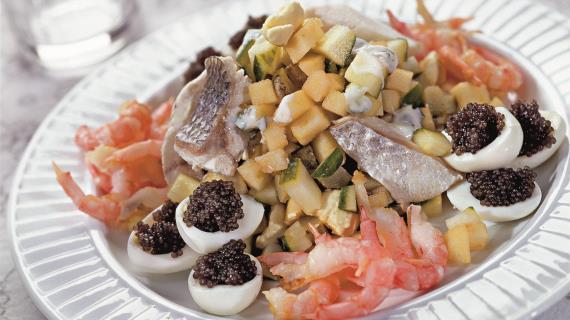 Even if there is only one jar of caviar in the refrigerator, and it is obviously not enough for everyone, there is a solution! . 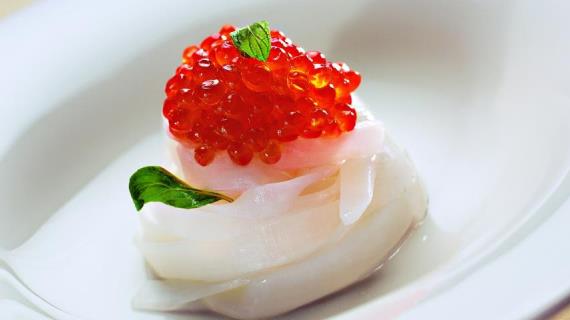 Caviar — decoration of the holiday table, with it any dish looks special. As . 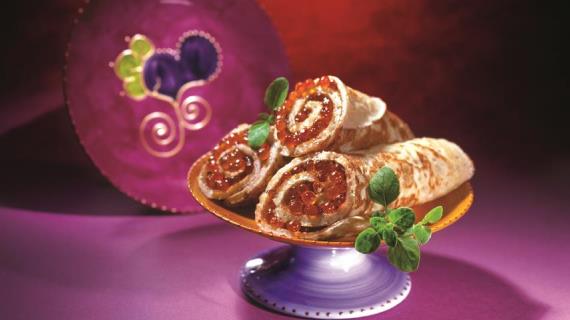 Remember the description of the table on Maslenitsa at I.S.Shmelev in "Summer of the Lord"?"The table is huge. .