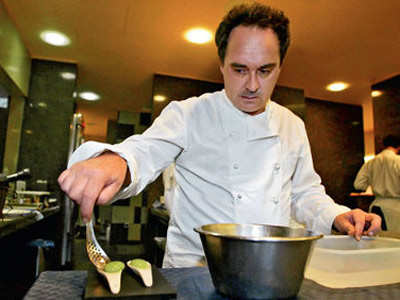 “I did not even think,” says Ferran Adria, “that everything will turn out this way.

That I, for example, will give someone an interview.

But when children began to approach me on the streets to take a picture, I suddenly felt that I had a social role. ”

Everyone seems to know about Ferran Adrià. Ten years ago his restaurant El bulli in the town of Roses for the first time was named the best in the world (since then he has won this title several more times). Adria became the founder of avant-garde cuisine — his bold experiments with the form and content of dishes brought him deafening success with criticism and absolute worship of the Catalans.

Today El bulli it works three months a year, and the rest of the time its creators work in the laboratory, dissecting new tastes.

You can get into the restaurant only by booking, which, in turn, can only be won. Newspapers report: in 2008 El bulli received 2 million applications for 8 thousand seats.

Adrià specifies that places are played in the lottery by the rules: 50% to Spaniards, 50% to foreigners, 50% already visited here, 50% to beginners.

It is also known that in 2012 the restaurant will be temporarily closed to the public.

We are talking at a gastronomic forum in Girona, the capital of the eponymous Catalan province. For several years of its existence, it has become one of the notable events of the restaurant world. Famous chefs, manufacturers of modern appliances and organic products, journalists from different countries gather here.

But almost the main attention is paid to visitors: families, published «in the light» in full force, groups of schoolchildren, housewives, boys and girls who pre-occupied places at master classes … An audience that clearly has no professional attitude to what is happening, but just interested in gastronomy — how others are interested in Hollywood life.

And this confirms once again: in Catalonia, high-class cuisine is perceived in a special way.

“Once, my brothers and I sat and thought about how many processes could be combined in preparing one dish,” says Joan Roca. — Carried away, we began to invent the most complex dessert in the world: cream and jelly, marmalade, crunchy petals, nougat, ice cream and warm caramel, spicy chili, bitter grapefruit … From time to time, one of us recalled some other operation, and as a result, the dessert turned out to be from fifty different elements according to the method of preparation ”.

Roca Brothers — Joan, Jose and Jordi are the brightest representatives of the generation of Catalan chefs who came after Adria. Roca make wine kitchen — their wine necessarily participates in the process of creating dishes.

But, for example, “oyster in Chablis” is not just a clam in wine, but an oyster with a pure taste of Chablis, which is extracted and attached to it in the most complex technological way. Fate — researchers and just boys who like the technique very much, they disappear day and night in their laboratory, which is similar to the hadron collider.

And they are showmen: they work at the master class as illusionists. Joan is the chef, Jordi is the confectioner, and Jose is the wine maker.

In their restaurant El celler de can roca in the vicinity of Girona to get from the street is also impossible, although the chances are slightly higher than in El bulli.

Joan Roca grew up on the work of Adrià: he is one of a generation of young chefs who work in their own genre, but continue the avant-garde line of the master. Many of them themselves have already reached such heights that they can easily be considered symbols of Catalonia — like the Roca brothers. Their restaurant El celler de can roca in Girona has two Michelin stars, and there is talk that the third is about to happen.

If this happens, there will be four three-star restaurants in Catalonia — more than in the rest of Spain.

His two restaurants — Estany clar and L’Angle — received by a Michelin star, and Jordi himself released a book about logical kitchen: in it the use of certain technologies is explained simply and clearly, in a word, logical.

The Cruz tasting set is ten dishes that illustrate the most spectacular techniques: from an octopus cooked in vacuum with the aroma of smoked beech and pumpkin soup with citronella to a lamb melting in your mouth for 50 hours at a temperature of 50 ° C.

Have the Catalans always been such advanced culinary or have they become in the last ten years? The organizer of the forum in Girona Pep Palau, the main expert on the subject in his country, answers this question in the following way: “Our gastronomy has gained worldwide fame thanks to the creative cuisine of Ferran Adria. But behind him there are many good bosses, who, of course, worked before him.

Creative cuisine is for a narrow circle. The rest is for all connoisseurs of gastronomy. ”

And the truth is: there are 41 Michelin-starred restaurants in Catalonia, but it is obvious that interesting cuisine is not limited to this list.

The fact that the chefs have turned into celebrities is quite logical and, in a sense, flows from Adria’s “social mission”.

In Catalonia, the spirit of gastronomic adventurism has penetrated, it seems, everywhere.

People of various professions strive to contribute to the Catalan cuisine becoming the very same in the world — another, like the endless construction of the Sagrada Familia, which united the “project” nation.

Here a large bank buys the premises of an old monastery an hour from Barcelona and puts it under a research center (under the guidance of someone who guesses). This center Alicia — By the way, the only one in Europe — it looks like a real alchemical laboratory: spherifiers, distillers and other utensils for experiments with liquid nitrogen, infusions and chromotherapy. Here they are not only looking for new ways of processing products, but also studying the effect of various ingredients on health.

All this can be viewed (with a guided tour, of course).

Another project was launched with the support of the state, it is called «gastronomic groups.»

Young chefs unite and serve under the patronage of any well-known chef — so that the young people quickly reach their level.

Today there are sixteen such groups in Catalonia, each with its own recognizable style.

They often include not only restaurants, but also farmers — after all, many of the chefs now use not just organic products, but products of the “zero kilometer”, in other words, what grows within reach. (By the way, Ferran Adrià allows producers of organic products to use their name in advertising for free.) I asked Pep Palau who initiated the “gastronomic groups”, and he said that the first two appeared spontaneously, back in the late 90s, and the real movement It began in the 2000s, and then the government began to actively support it.

There are many examples of such “local initiatives” in Catalonia. Imagine: the family has been baking simple tasty biscuits for a century, and a few years ago began to produce essences: two hundred flavors from rhubarb and damask roses to bacon and sea urchins are stored in opaque bottles.

The season premiere is a colorful «palette», a kind of simulator for beginners: all the flavors in mini-jars, especially for chemists whose hands itch to mix the smell of tiramisu, violets and smoked salmon and see what happens.

A little later, walking through the Girona streets, I go to the ice cream shop and see ice cream with the taste of shrimps from Palamos, goat cheese from Radikiero, Sichuan pepper, black olives, green cardamom, rice, Armagnac, mascarpone with kavoy … All except seems to be plain vanilla.

But I was not even surprised — such is the fashion in Catalonia.

All carried away by the «architecture of taste.»

Carme Ruskieda. Carme — colorful as the heroines of Almodovar, senora in years — a real legend of Catalonia. Carme has a restaurant Sant Pau in Santa Pol de Mar, near Barcelona.

Everything seems to be simple: the family business — Carme cooks, her husband runs the business, the restaurant is set up in an old villa with a garden, and the kitchen can be defined as traditional; very close attention is paid to products — they are almost all local, from neighbors Karma. What is the legend of karma and for what the restaurant Sant Pau awarded an honorable three stars? The fact is that the execution of her kitchen is incredibly complex and interesting.

You are carried out on a plate «planet» — a certain sphere in which the seas and continents are guessed, and white clouds float above this planet.

The Japanese also like to let the fog in their food: two years ago, it opened — and immediately received two stars — the Karmi Ruskayedy restaurant in Tokyo.

Famous restaurants in Catalonia are scattered around seaside towns, in villages in the depths of the province. Sometimes the establishment is completely in the middle of a clean field, in lavender thickets, and it even becomes surprising: how did anonymous inspectors of the Michelin company find it?

For the Catalans, this is not a problem — to drive by car for half an hour to have an excellent dinner.

For tourists, in principle, too: the car is easy to rent, a list of restaurants will be given at any tourist office.

And for those who want everything to be nearby, always remains Barcelona. The Catalan capital is today called among the most advanced cities in the world in terms of cooking, and this means that it is not just tasty food here — in Barcelona you can get acquainted with the latest gastronomic trends. For example, with Bistronomy: young chefs open democratic establishments and offer high-quality cuisine in the light, witty and creative version, at prices ranging from 12-15 euros for lunch.

Such bistros (most are located in the modernist quarter of Eixample: Gresca, Hisop, Catalina, Embat) are always full of young public, sometimes there are queues in them, and rumors about the next set quickly fly through word of mouth.

But bystronomy is an international phenomenon, in this genre many well-known bosses have already noted up to Gordon Ramsay, and in Barcelona there are also their own trends. For example, the following: a chef who made a name for himself in “high calm” opens a restaurant of traditional Catalan cuisine.

Similar project Carlos Kacha — a stylish tavern Fonda caig from the menu of rethought «grandmother’s» dishes — it was a huge success.

And the most global project — with love to all guests of Catalonia! — launched in 2009.

The best chefs (again, under the guidance of someone guessing) chose the forty most typical Catalan dishes. For example, a duck with pears, figs, honey and turnips, cod with currants, eggs and ratatouille, a rabbit with snails, stuffed squid. The dishes were combined into a special menu and offered restaurants to participate (there were about a hundred of them).

No cooking recommendations were given, that is, each establishment prepared a Catalan menu in its own style.

If tourists, resting on the coast, saw on the door of the restaurant a sign “100 years of the Costa Brava”, it meant that all forty dishes are served here that the country is proud of.

As they say, do not pass by!