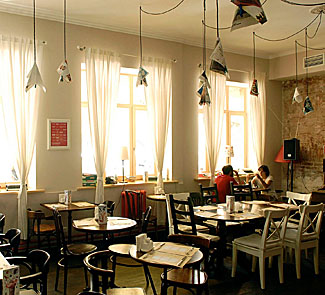 Cafe Bar Sly People Winzavod opened on the territory of the SRC at the end of January 2012 and almost immediately became a place about which "someone told me recently".

Sly People is a cafe-bar, created not by professional restaurateurs, but by people who had recently themselves been regulars of the few Moscow establishments where it is unglamorous and fun.

At some point, the future Sly People thought that there was a catastrophic shortage of places in Moscow, where it was tasty and inexpensive, polite and cozy, where the right music and great concerts were and where it was pleasant to be at any time of the day and regardless of the day of the week.

Thought and opened your bar.

The kitchen in Sly People is both unusual and simple, with the right portions and prices.

Meals are born in conversations with the chef, come up with guests, brought from traveling around the world.

Since most of the guests are regular, the menu in Sly is updated regularly: special seasonal offers and daily specials appear.

In addition to the above, Sly People regularly hosts concerts, film screenings, invited dinners, exhibitions and other spontaneous events. Follow the poster can and should be facebook.com/hitrye

«Insofar as Sly people — a typical city cafe, it was clear that the new dishes should be universal, without a bias in any national cuisine, — says Alyona Spirina. — Well, besides, the new menu is summer.

So, it should have a lot of vegetables, herbs, bright colors and fresh flavors — all that I love. We also used leafy vegetables: spinach, sorrel, beet tops, and spicy greens: parsley and dill, cilantro and tarragon, green basil and mint, and the most summer vegetables: green peas, radishes, cucumbers.

They act in the dishes not as «additions», but rather active players.

As an amateur cook (non-professional chef), it was very interesting for me to adapt “homemade” dishes to restaurant technologies.

We came up with a few summer “snacks on bread”, in which banal, it would seem, foods are combined with “strong” flavors: spinach — with sweet and sour raisins and spicy peas, pear — with nut-garlic paste, tomatoes — with capers and anchovies. Conservative guests can order bruschetta with tender chicken liver pate and onion marmalade.

Actually, it is quite possible to have some lunch with bruschetta.

This is how the green pea cream soup appeared on the menu: there is no dairy base in it, which, in my opinion, drowns out the fresh taste of peas, but there is a “secret ingredient” that this taste emphasizes — a sour apple.

Many people in the summer try to eat less meat. A tasty and interesting to feed a vegetarian — a separate test in the preparation of the menu. I think we managed to come up with interesting dishes without meat: both soups, and snacks, and hot dishes.

There was, for example, a burrito with bean pate: chili, but without meat.

Meat eaters also tried to please: the menu now has a mutton drumstick, stewed in white wine, with green olives.

We also made a summer beef stew with orange juice and seasoning made from parsley, garlic and orange peel.

Dessert is a matter of pride. Klafuti, whose formula I derived last year.

It turns out a very delicate portioned dessert, which can be easily modified using either rhubarb, gooseberry, or currant instead of cherry ”.

2019-02-28
admin
Предыдущий Basturma — a description of the benefits and harm, the recipe of cooking at home
Следующий The mystery and meaning of the name Cyprian